Metabolism involves a whole set of biochemical reactions constantly occurring inside a living body to keep it alive and active. The metabolites are the intermediate compounds or end products generated as a result of these metabolic transformations.

We can categorise the metabolites in two parts based on their origin and function- Primary and Secondary metabolites.

The primary metabolites directly influence the vital process like growth, development and reproduction of any organism. In contrast, secondary metabolites have no direct involvement in the vital life processes.

The primary metabolites consist of vitamins, amino acids, nucleosides and organic acids. The body produces them during the logarithmic phase of microbial growth.

But the, products like alkaloids, steroids, antibiotics, gibberellins, and toxins are the secondary metabolites. The body generates them during the later stationary phase of cell growth.

The following discussion will update you with all the key differences between Primary and secondary metabolites.


What are Primary Metabolites?

The primary metabolites are the chemical compounds involved in primary metabolism (Trophophase), such as photosynthesis, cellular respiration etc.
As they are part of the central reactions occurring inside a living body, we often refer to them as central metabolites.

They directly impact the balanced growth, development and reproduction abilities of an organism. Mostly the primary metabolites generated are almost common in all the species. It is because they play a role in the biochemical reaction responsible for the survival of an organism.

The production curve of the primary metabolites typically follows the growth curve of the cells. Their formation occurs simultaneously with the new exponentially multiplying cells.

The body tries to produce and maintain their adequate concentrations to maintain the optimum functioning of the body. 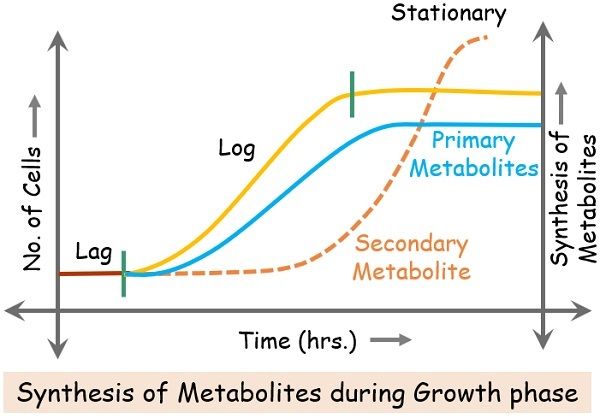 Limitations in the Production of Primary Metabolites

The manufacturing of primary metabolites by the body gets hampered due to the insufficient or limited supply of essential nutrients. It will not stop the metabolism completely but will intern slow the growth rate of an organism.

The primary metabolic processes don’t stop but continue till the cell is alive. But, the end products will largely differ from the naturally expected final product.

Over Production of Primary Metabolites

A living body requires every chemical compound in a certain amount. Thus, an increase or decrease in their concentration can severely obstruct bodies’ optimal functioning.

Similarly, the overproduction of primary metabolites also hampers the organism. This excessive production generally occurs due to undesirable genetic manipulations or mutations. For instance, Auxotrophic mutants block some critical steps in the biosynthetic pathway involved in producing primary metabolites.

Industrial Application of the overproduction of Primary Metabolites

These metabolites are of high importance in the industrial sector. Industries cultivate them on a larger scale to attain a variety of purposes, such as

Also, they include products such as carbohydrates (starch, pectin, cellulose, sucrose etc.), vegetables oils and fats (used in making detergents and soaps).

Generally, the plants and some microbes manufacture these metabolites in bulk. Their extraction process is easy, and thus these metabolites can be obtained easily. For this reason, they are often referred to as high-volume-low-value bulk chemicals.

Industries are adopting new and modernised approaches for their overproduction. One such approach is eliminating the feedback inhibition mechanism.

1. By using the Auxotrophic mutants to block one of the steps in the synthesis mechanism. By this, the production of the end product is blocked, and hence there is no feedback to terminate or inhibit further production. 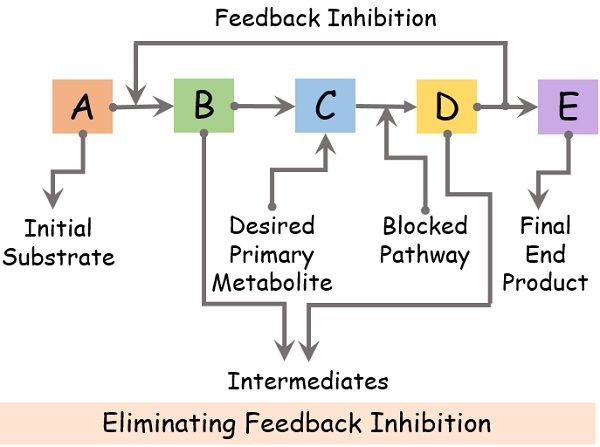 Note: The mutant used should always be a part of the intermediate step and not the final one. 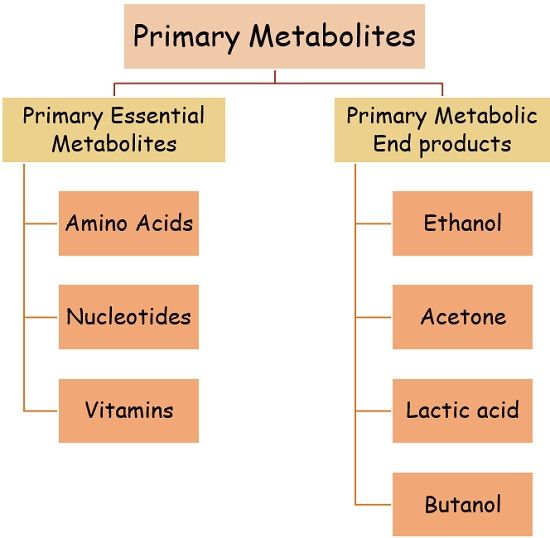 Although these products are not important, sometimes have industrial importance too. For instance, carbon dioxide is the metabolic end-product of the Saccharomyces cerevisiae, but (CO2) is important in the baking industry for the leavening of the dough.

These are central metabolic compounds that remain engaged in forming the general shape, structure and scaffolds of a body. They support the organism at the beginning so as to carry out the essential physicochemical processes in the body.

Excessive production of the primary metabolites is very important and useful for large scale purposes in industry. Even the enzymes find during the process have many uses in food production, textile finishing, and other industries too.

Some other specified functions of primary metabolites are as follows:

What are Secondary Metabolites?

As soon as the Trophophase terminates, the exponential growth of the organism ceases. And further, they enter the secondary metabolic phase, i.e., Idiophase.

After the constant growth, the mature plant starts to produce some natural organic compounds that are secondary metabolites. As the body generates them in the Idiophase, they are also called idolites or phytochemicals. 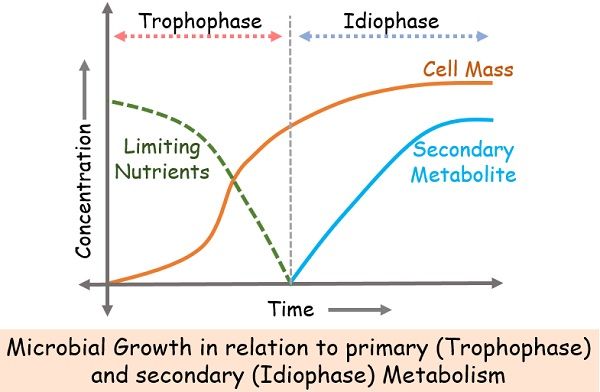 We refer to them as secondary due to two main reasons:

2. They are not involved in the primary metabolic functions necessary for survival. Thus, they are of secondary use to the living body.

It is evident that secondary metabolites have no role in growth, multiplication, reproduction, or other survival abilities. According to scientists, the specific role of these metabolites is unclear.

Yet, as per recent research, they play a part as bioactive compounds. They mainly help sustain a healthy gene expression for a respective process in the body.

Unlike the primary metabolites, their occurrence widely varies from organism to organism. Their structure and purpose also differ in different types of species.

Below are the three common hypotheses that are often linked with secondary metabolites:

Most of these metabolites function as alkaloids, steroids, growth hormones, antibiotics etc.

This makes a profitable product for industries to manufacture. Therefore, in order to cultivate these metabolites on a large scale, the natural processes are deliberately stimulated either chemically or physically.

The production process of these metabolites is a highly elaborative and complicated procedure. Thus, the regulatory mechanism is manipulated to generate these chemicals in higher proportions.

Some commonly used regulatory mechanisms are:

They play a part in the coping mechanism of the plants to overcome biotic stress. Earlier we used to consider them as waste products, but the gradual studies have proven them to be a potential defence chemical. These are essential in providing resistance to diseases and pests. 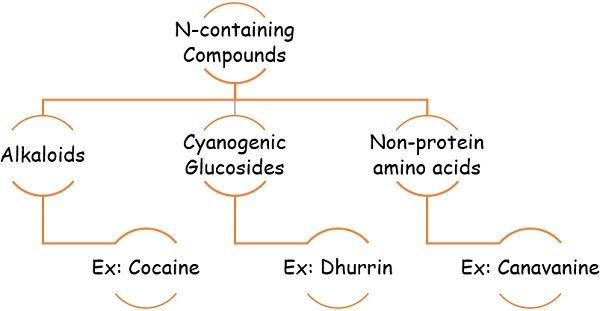 These are rather unusual constituents in plants, but they are responsible for regulating the interaction between plants and pests. These metabolites provide a broad range of defence against powerful enemies because of their versatile array. 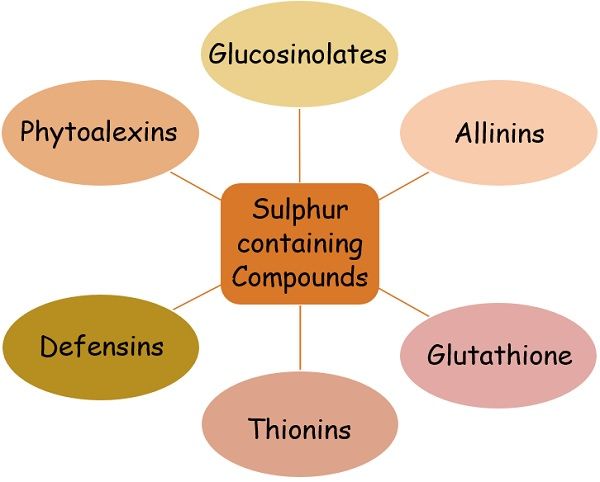 They are well known for their aromatic qualities and characteristic smells. Also, they act as herbal remedies for several diseases. Pigments like β-carotene and lycopene are the types of terpenes only.

The rubber secreted by the trees is also a kind of teraponid that heals the wounds and cuts. 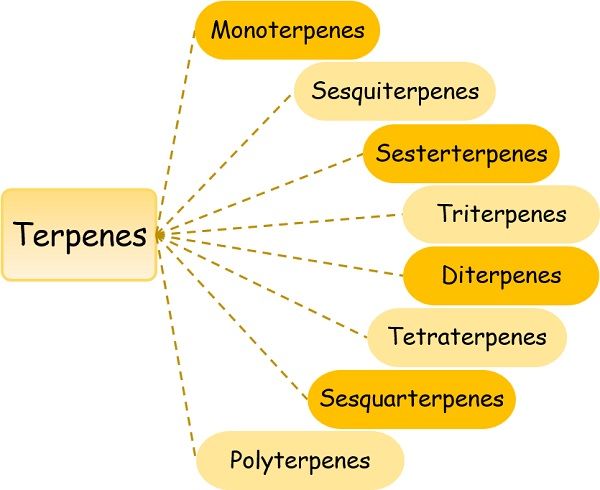 They possess one or more than one aromatic rings with a hydroxyl group. Lignin that supplies the mechanical strength to the plants is also a phenolic macromolecule. Phenolic pigments like anthocyanidins and anthocyanins impart pink and purple to flowers and fruits. 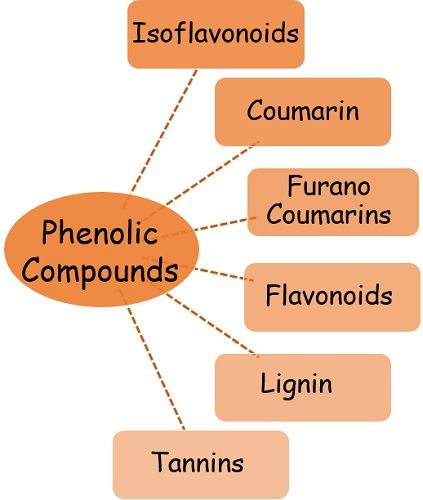 Metabolites are chemicals that are either intermediates or end products of biochemical processes. We divide these metabolites into two categories- primary and secondary.

The secondary metabolites are the bioactive compounds that don’t have any role in the necessary reactions. They are different in different species and the body generates them during Idiophase. Their overall functions are still not clear. But as per recent researches, they perform the function in defence-related activities. Also, they provide colouration and a significant essence.