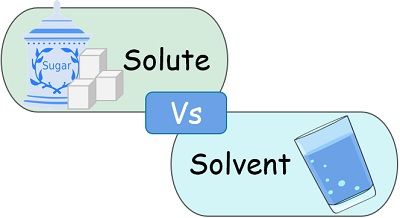 The solutes are present in all three states, i.e., solid, liquid and gas. But the solvents are generally fluid state. The quantity of solute is always less while that of solvent is more in a solution.

The boiling point of solute is greater while that of solvent is lower.

The following article will briefly showcase the elementary differences between solute and solvent.


What is a Solute?

In a solution, a solute is a substance that gets dissolved in the solvents. As soon as it comes in contact with the appropriate type of solvent, it starts undergoing the process of dissolution.

Note: The dissolution is the act of dissolving a solute in the solvent.

During the dissolution process, solvent breaks the molecules of solute apart and disperses them uniformly. This generates a homogenous mixture which we refer to as a solution.

Measurement of solute in the solution

We estimate the quantity of solute in a solution based on its concentration. This concentration is nothing but the amount of solute present in the total volume of solvent. This is easily calculated by using the molarity.

We can define solute concentration as:

“The moles of solute dissolved per litres of the solution”.

The solvent can dissolve the various quantities of solute based on its strength of dissolution as well as the tendency of the solute particles to move apart. We refer to this property of solute as ‘Solubility’.

Thus, in order to form a solution, the attractive forces applying externally to the solute must be greater than the already existing force. And as soon as the solute-solute bonding breaks, the solute-solvent bonding begins.

As per chemistry, Saturation refers to the condition of equilibrium that balances the opposite forces, thereby equalizing the reaction rate. A solution is considered saturated when no further amount of solute can be added to it.

When the solvent has dissolved, the solute particles are up to their maximum limit and have no further space for more solute molecules. This is the process of Saturation, and the solution is a saturated solution.

Characteristics of the Solute

Examples of Solute: Salt in Water

When we add a spoonful of salt, i.e. solute, to a glass of water, i.e., solvent, we can see that the salt directly collects at the bottom. It doesn’t directly start diluting in the water, and even if started at the molecular level, it is not visible to your eyes.

Now the question arises of what actually happens at the molecular level. So, as you know, the oxygen atom of a water molecule is negatively charged while the hydrogen is positively charged. The NaCl (salt) molecules possess ionic bonds consisting of a positive sodium ion and a negative chloride ion.

Note: As discussed above, the surface area determines the solubility. Thus, when we dissolve the coarse salt, it will expose a lesser area for the dissolution. And here, the time required for solution formation is also more. Whereas, if you take fine salt, it will lead to the exposure of more area. This will allow the solute particles to diffuse fast and uniformly throughout the solution.

What is a Solvent?

The solvent is that component of the solution which dissolves the solute. It can break the molecular interaction between solute-solute molecules and suspend the free solute molecules evenly to make a solution. 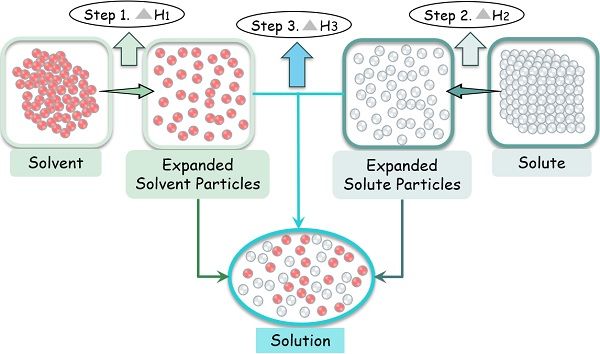 The major proportion of the solution remains occupied by the solvent. This is because its amount is always greater than that of the solute.

The solubility phenomenon relies on one basic factor “Like Dissolves Like”. This means solvents with the same chemical properties as solute will have a greater affinity toward solute particles. Due to this, the solution will be uniform, and the time required for solution formation will be less.

On our planet earth, if something is in abundance, that is – water. It is the most common liquid around us, used to perform activities for living.

It possesses a remarkable quality by which it can dissolve many substances within it. Due to this unique ability, we refer to water as a universal solvent.

Characteristics of the Solvent

We can divide solvent into two basic categories:

Polar solvents possess a positive and a negative charge that acts as two oppositely charged poles. They can dissolve polar compounds by dissociating the ionic interaction between solute-solute particles.

They have a high dielectric constant and have one or more electronegative atoms like N, H or O.

They contain bonds with similar electronegative atoms like C and H. They consist of non-polar molecules that can dissolve non-polar compounds or solutes.

Key Differences Between Solute and Solvent

Given below are the key differences between solute and the solvent:

Solutes and solvents are substances not used only in chemical laboratories, but they are part of the day to day life. A solution contains only two components, which are solute and solvent. Solvent has the capability of dissolving the solute in a homogenous solution.

We discussed the characteristics of both the substances and concluded that in one solvent there can be different types of solutes and can form a homogeneous solution.