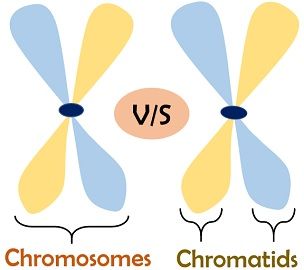 The chromosome is the most condensed form of DNA, which remains packed into a thread-like structure. On the other hand, a chromatid is the one-half copy of the newly formed chromosome, joined by the centromere to the original chromosome.

Secondly, the chromosomes are present every time in the nucleus of each cell and thus carry the genetic material. While chromatids form during the cellular division processes of mitosis and meiosis.

DNA contains all the secrets that make one person unique from others, whether it is physical, like in looks, height, complexion, or in habits and even internally. So, it is the priority of the cells to keep the DNA safe. DNA has so much information that it could even stretch from the Earth to the Sun four times.

In order to keep all information protected, the DNA is highly organized in its form and comprises four chemicals which are adenine (A), guanine (G), cytosine (C)and thymine (T). These chemical’s base pairs with one another with the help of sugar (ribose) and a phosphate molecule.

The discussion of DNA is vast, and so in this content, we will discuss the two confusing terms, which are ‘chromosome’ and ‘chromatid’. These words often seem identical at first glance, but they are not the same and differ in a few points. So, let us discuss them.

The chromosome is a structure where the highly condensed form of DNA is present. It is the long thread-like structure that contains the genetic material of organisms. The word has been derived from the Greek words where “chroma” means “colour“, and “soma” means “body“.

Atlas blue butterfly, found in North Africa, has 448-452 chromosomes. While the Jack jumper ant, a native of Australia, has only one chromosome.
In the case of Humans, in every cell, there are 22 identical pairs of a chromosome (autosomes), except the sex chromosomes, which are X and Y. So there are 48 chromosomes in humans. The ‘Y’ chromosome expresses male characters. Whereas the ‘X’ chromosome is a larger chromosome and contains more genes, and is more dominating too.

In the cell cycle of the cell, during the S phase, the amount of DNA gets doubled in order to proceed with cell division. So a new copy of a DNA strand is formed, copying the same genetic information as the existing strand. Though the number of chromosomes remains the same in the cell, in the end, each chromosome will have two copies of DNA strands, and one of the strands of DNA is termed a chromatid. Hence, a single DNA strand is a chromatid.

So we can say that the chromatid is one-half of the newly replicated chromosome joined to the original chromosome. The chromatin has a thread-like structure and contains chromatin fibres. The DNA is wrapped around the histones, which are a protein.

On the other hand, due to mutations during replication, the newly formed DNA strand makes the sister chromatids heterozygous. Although at the time of sexual reproduction, the maternal and paternal homologous chromosome pairing results in non-sister chromatids.

Key Differences Between Chromosomes and Chromatid

Below are the critical points to exhibit the difference between the chromosome and chromatid:

In this context, we explore the points on which the chromosome and chromatids differ. We also came to know their role in the cell cycle. As these are present in both prokaryotes and eukaryotes, we can also say that the genetic material must have undergone a significant process of evolution over time.