Replication is processed inside the nucleus and involves the copying of the genetic material so that the new daughter cell thus form contains the identical copies as their parent cells. While transcription is processed in the cytoplasm where a segment of DNA is transcribed into RNA. Both the process occurs inside the cell.

The flow of biological information from DNA to RNA and then synthesis of proteins is considered as the ‘central dogma of life‘. These involve the three main processes which are replication, transcription, and translation. Replication is the process of duplicating the ones own genetic materials into two more identical copies, so that the similar information may get further transfer to the new daughter cells.

Transcription involves the conversion of DNA into RNA, it is helpful in gene expression of the selected segment of DNA. Translation is said as the final step where protein formation takes place. Below we will be discussing the important difference between replication and transcription, and the process involved in it.

In the process of cell division, when the cell divides into two identical daughter cell, it also transfers the genetic information from the parent cell. So we can say that replication is a process where DNA copies itself and produces identical daughter molecules of DNA.

The process of replication is different in prokaryotes and in eukaryotes. Though it involves the few common steps like the origin of replication, it is the site from where the replication begins, at this site the enzyme gets attached and unwind the double helical structure into single and accessible form assisted by the enzyme DNA helicase.

The one strand is called leading (continuous or forward strand) strand while the another one is called lagging (discontinuous or retrograde) strand. This unwinding exposes the unpaired bases to serve as a template for the formation of new strands. The strand ends have their name as 5′ and 3′, and the process of replication starts from 5′ to 3′ directions, simultaneously on both the strands.

It is said that in prokaryotes synthesis of DNA is semi-discontinuous. The primer ( a small segment of RNA) is added, eventually proceeding to the addition of nucleotides, which are the complementary base pair with the unpaired base.

The enzyme called DNA polymerase helps in the formation of this assembly. Also, the pattern of replication in prokaryotes and in eukaryotes is same, that is the semi-conservative type, where half of the original DNA is conserved and the other is newly formed DNA. This evidence for semi-conservative DNA replication was given by Meselson and Stahl (1958).

The process is carried out with high fidelity, so that the genetic information may get transfer correctly from one generation to generation. Proofreading activity is also done by DNA polymerase III, which checks the attachment of the nucleotides to the correct base pair. DNA polymerase corrects the mistakes of any mismatch found between the base pairing of the complementary bases.

The intermediate product of DNA is RNA, where the genes are expressed after the replication. So it is called the site of expression of the genetic information. In this process, one of the two strands formed after replication works as a template (noncoding strand or sense strand) and another as antisense (coding strand or antisense strand). The almost whole process is same in both prokaryotes as well as in eukaryotes, but there exist some basic differences between them.

The whole molecule of DNA is not expressed in transcription, rather some selected part of DNA is only synthesized as RNA. The reason for this is unknown, but it is said that it might be due to the internal signaling.

The product formed in transcription is referred to as primary transcript, as these are inactive. So to make them functionally active they undergo certain kind of alterations like splicing, base modifications, terminal additions, etc. These are known as post – transcriptional modifications.

Some of the similarities between the prokaryotes and eukaryotes transcription process are like in both the kind DNA act as the template for the process, chemical composition (base pairs) is same, RNA polymerase plays a major role in both the groups.

Apart from this, there are other differences like in initiation site, Rho factor, promoter region, termination point, the presence of introns, post-transcriptional modifications, etc. 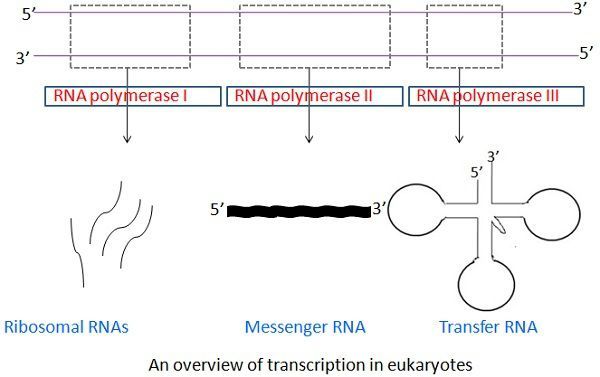 Though in many viruses, the genetic material is contained by RNA also and has the ability to perform other cellular function like DNA. But it is chemically found that DNA is more stable than RNA, hence DNA is only preferred as more suitable macromolecule for the storing the genetic information long life.

Key Differences Between Replication and Transcription

From the above article, we can say that cell division is a vital and essential process for all the living beings to grow. Prior to cell division involves the most important process called as replication of the DNA. In this process, the genetic material gets divides and is ready to transfer it further to the new daughter cells.

While transcription involves the formation of RNA. This two process involves the enzymes like helicase, DNA polymerase, RNA polymerase, primase, transcriptase.So precisely we can say that DNA makes RNA and RNA make protein, which is the central dogma of all kinds of life.