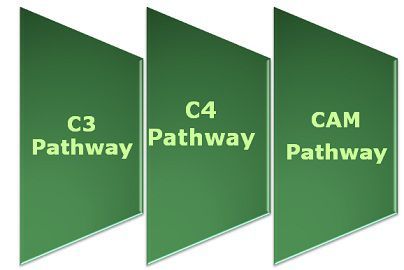 The assimilation of carbon dioxide from the sunlight, for the process of photosynthesis and then converting it to glucose (energy) synthesizing different product is the key difference between the three. So during the CO2 fixation, when the photosynthetic plants produce 3-phosphoglyceric acid (PGA) or 3- carbon acid as the first product is called C3 pathway.

But when the photosynthetic plant, prior going to the C3 pathway, produces oxaloacetic acid (OAA) or 4 -carbon compound as their first stable product is called as C4 or Hatch and Slack pathway. But when the plants absorb the energy of the sunlight at the day time and use this energy for the assimilation or fixing the carbon dioxide at night time is called as crassulacean acid metabolism or CAM.

These procedures are followed by plants, certain species of bacteria and algae for the production of energy, independent of their habitat. The synthesis of energy, using carbon dioxide and water as the primary source to gain nutrients from air and water is termed as photosynthesis. This is the prime process for the living being which produces food on their own

In this content, we will be considering the essential difference between the three types of pathways followed by plants and few microorganisms and a small description about them.


Definition of a C3 pathway or Calvin cycle.

C3 plants are known as cool-season or temperate plants. They grow best at an optimum temperature between 65 to 75°F with the soil temperature suited at 40- 45°F. These types of plants show less efficiency at high temperature.

The primary product of C3 plants is 3-carbon acid or 3-phosphoglyceric acid (PGA). This is considered as the first product during carbon dioxide fixation. The C3 pathway completes in three steps: carboxylation, reduction, and regeneration.

C3 plants reduce into the CO2 directly in the chloroplast. With the help of ribulose biphosphate carboxylase (RuBPcase), the two molecules of 3-carbon acid or 3-phosphoglyceric acid are produced. This 3- phosphoglyceric justifies the name of the pathway as C3.

In another step, NADPH and ATP phosphorylate to give 3-PGA and glucose. And then the cycle again starts by regenerating the RuBP.

The C3 pathway is the single step process, takes place in the chloroplast. This organelle act as the storage of sunlight energy. Of the total plant present on earth, 85 percent uses this pathway for the production of energy.

Definition of C4 pathway or Hatch and Slack pathway.

Plants, especially in the tropical region, follow this pathway. Before Calvin or C3 cycle, some plants follow the C4 or Hatch and Slack pathway. It is a two step process where Oxaloacetic acid (OAA) which is a 4-carbon compound is produced. It occurs in mesophyll and bundle sheath cell present in a chloroplast. 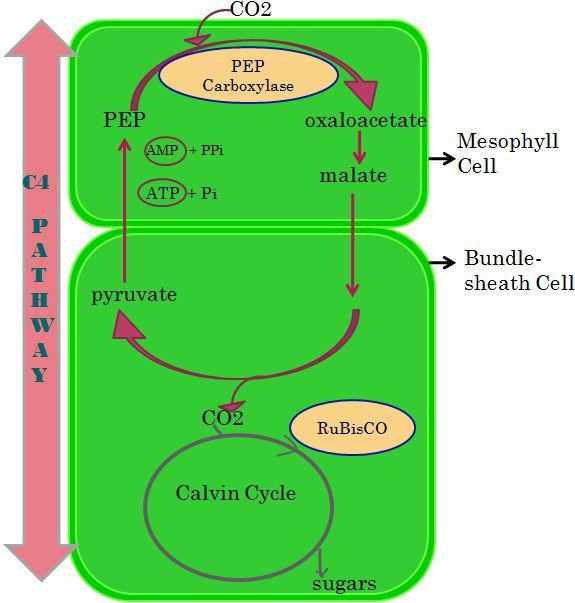 C4 plants are also known as warm-season or tropical plants. These can be perennial or annual.The perfect temperature to grow for these plants is 90-95°F. The C4 plants are much more efficient in utilizing nitrogen and gathering carbon dioxide from the soil and atmosphere. The protein content is low as compared to C3 plants.

These plants got their name from the product called as oxaloacetate which is 4 carbon acid. The examples of perennial C4 plants are Indian grass, Bermudagrass, switchgrass, big bluestem and that of annual C4 plants are sudangrasses, corn, pearl millet.

The noteworthy remark which distinguishes this process from the above two is that in this type of photosynthesis the organism absorbs the energy from the sunlight at the day time and uses this energy at the night time for the assimilation of carbon dioxide.

It is a kind of adaptation at the time of periodic drought. This process permits an exchange of gases at the night time when the air temperature is cooler, and there is the loss of water vapor. 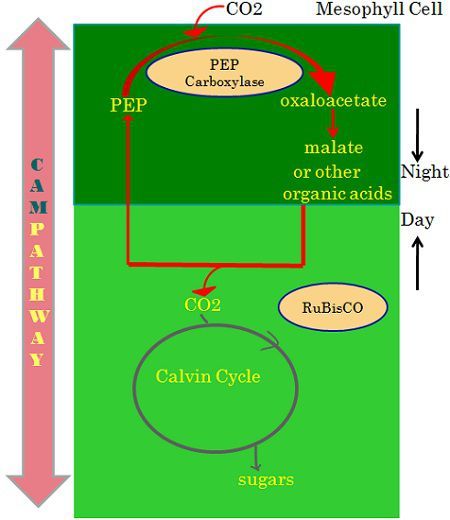 Around 10% of the vascular plants have adapted the CAM photosynthesis but mainly found in plants grown in the arid region. The plants like cactus and euphorbias are the examples. Even the orchids and bromeliads, adapted this pathway due to an irregular water supply.

In the day time, malate gets decarboxylated to provide CO2 for the fixation of the Benson-Calvin cycle in closed stomata. The main feature of CAM plants is an assimilation of CO2 at night into malic acid, stored in the vacuole. PEP carboxylase plays the main role in the production of malate.

Above we discuss the procedure for obtaining the energy of these different types, below we will discuss the key differences among three:

We all are aware of the fact that plants prepare their food, by the process of photosynthesis. They convert atmospheric carbon dioxide into plant food or energy (glucose). But as the plants grow in the different habitat, they have different atmospheric and climatic condition; they differ in the process of gaining energy.

Like in case C4 and CAM pathways are the two adaptations arose by natural selection, for the survival of the plants of high temperature and arid region. So we can say that these are the three distinct biochemical methods, of plants to obtain energy and C3 is the most common among them.