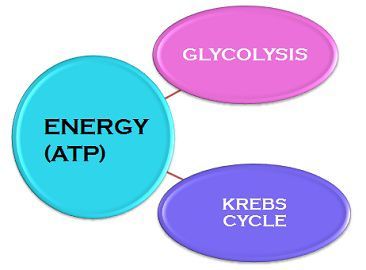 So Glycolysis is defined as the chain of the reactions, for the conversion of glucose (or glycogen) into pyruvate lactate and thus producing ATP. On the other hand, Kreb cycle or citric acid cycle involves the oxidation of acetyl CoA into CO2 and H2O.

Respiration is the important process of all the living being, where oxygen is utilised and carbon dioxide is released from the body. During this process, energy is released, which is used to perform various functions of the body. Apart from the above two mechanisms, there are various other mechanisms of respiration like Electron transport system, pentose phosphate pathway, anaerobic breakdown of pyruvic acid, and terminal oxidation.

In the provided content we will discuss the general difference between two most important mechanisms of respiration which are glycolysis and Krebs cycle.

Glycolysis is also known as ‘Embden-Meyerhof-Parnas Pathway‘. It is a unique pathway occurring aerobically as well anaerobically, without the involvement of molecular oxygen. It is the major pathway for glucose metabolism and occurs in the cytosol of all the cells. The basic concept of this process is that the one molecule of glucose gets partially oxidized into two moles of pyruvate, enhanced by the presence of enzymes.

Glycolysis is a process that occurs in 10 simple steps. In this cycle first seven steps reactions of glycolysis occur in the cytoplasmic organelles called as glycosome. While the other three reactions like hexokinase, phosphofructokinase, and pyruvate kinase are the irreversible one.

Further now fructose 1,6 -biphosphate gets splits to yield two 2,3-carbon molecules. Dihydroxyacetone phosphate, which is one of the product is converted into glyceraldehydes 3-phophate. This gives two molecules of glyceraldehyde 3-phopsphate, which are further processed to five-step payoff phase.

Pay-off phase is the energy gain phase of glycolysis, and it yields ATP and NADH in the last step. Firstly, glyceraldehyde 3-phosphate is oxidized with NAD+ as the electron acceptor (to form NADH) and an inorganic phosphate is incorporated to give a high energy molecule as 1,3 -biphosphoglycerate. Subsequently, high-energy phosphate on carbon one is donated to ADP to convert into ATP. This production of ATP is called substrate-level phosphorylation. 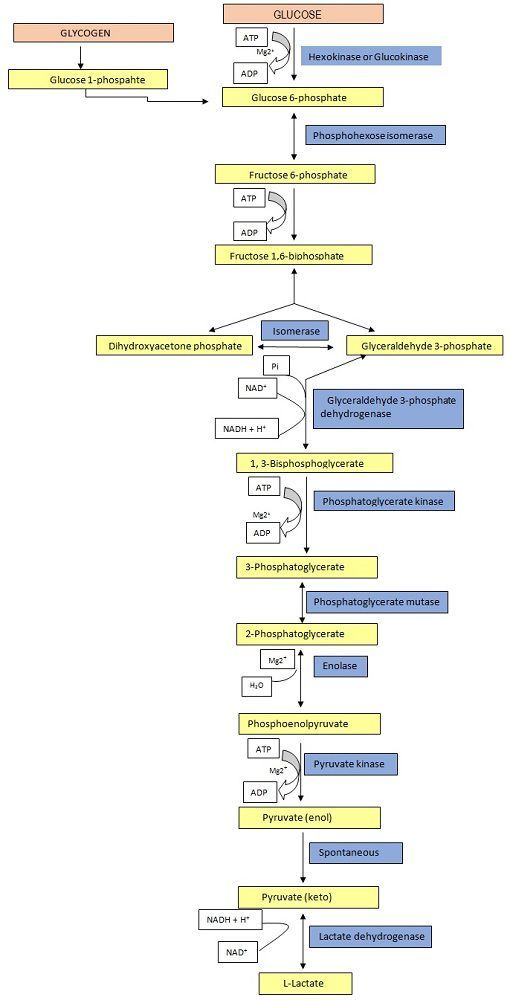 Thus the energy yield from the glycolysis is 2 ATP and 2 NADH, from one molecule of glucose.

Step 1: This first step is called as phosphorylation, it is an irreversible reaction leads by an enzyme called as hexokinase. This enzyme is found in all types of cells. In this step, Glucose is phosphorylated by ATP to form a sugar-phosphate molecule. The negative charge present on the phosphate prevents the passage of the sugar phosphate through the plasma membrane and thus engaging glucose inside the cell.

Step 2: This step is called Isomerization, in this a reversible rearrangement of the chemical structure moves the carbonyl oxygen from carbon 1 to carbon 2, forming a ketose from an aldose sugar.

Step 3: This is also a phosphorylation step, the new hydroxyl group on carbon 1 is phosphorylated by ATP, for the formation of two three-carbon sugar phosphates. This step is regulated of the enzyme phosphofructokinase, which checks the entry of sugars into glycolysis.

Step 4: This is named as cleavage reaction. Here two three-carbon molecule is produced by cleaving the six carbon sugar. Only the glyceraldehyde 3-phosphate can proceed immediately through glycolysis.

Step 5: This is also Isomerization reaction, where the other product of step 4, dihydroxyacetone phosphate is isomerized to form glyceraldehyde 3 -phosphate.

Step 6: From this step, the energy generation phase will start. So the two molecules of glyceraldehyde 3-phosphate are oxidized. By reacting with the -SH group, Iodoacetate inhibits the function of enzyme glyceraldehyde-3-phosphate dehydrogenase.

Step 7: ATP is formed, from the high-energy phosphate group that was generated in step 6.

Step 9: Enol phosphate linkage is created with the removal of water from 2-phosphoglycerate. Enolase (enzyme catalyzing this step) is inhibited by fluoride.

Step 10: Forms ATP, with the transfer of ADP to the high energy phosphate group, generated in step 9.

This cycle occurs in the matrix of mitochondria (cytosol in prokaryotes). The net result is the production of CO2 when the acetyl group entering the cycle as Acetyl CoA. In this, the oxidation of pyruvic acid into carbon dioxide and water occurs.

Krebs cycle was discovered by H.A Krebs (a German-born biochemist) in the year 1936. As the cycle begins with the formation of citric acid, it is called citric acid cycle. The cycle also contains three carboxylic groups (COOH), hence also called as a tricarboxylic acid cycle (TCA cycle). 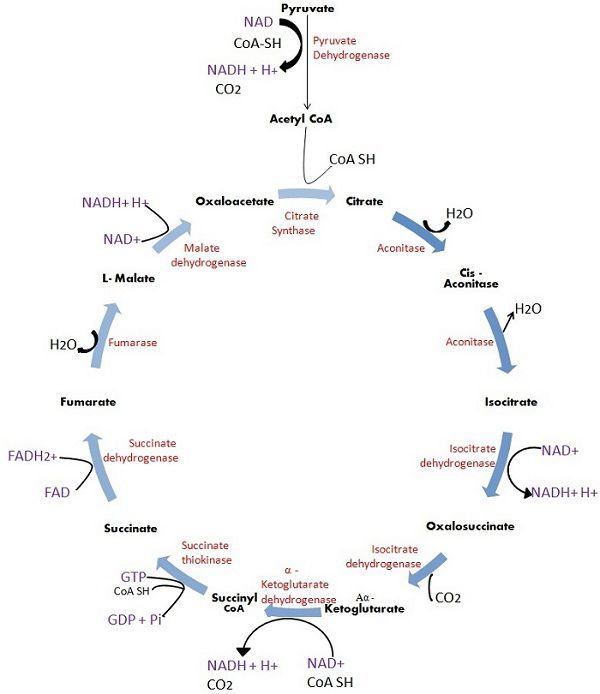 Step 1: Citrate is produced in this step when Acetyl CoA adds its two-carbon acetyl group to oxaloacetate.

Step 2: Citrate is converted to its isocitrate (an, an isomer of citrate), by the removal of one water molecule and adding the another.

Step 3: NAD+ is reduced to NA when isocitrate is oxidized and loses a CO2 molecule.

Step 4: CO2 is lost again, the resulting compound is oxidized and NAD+ is reduced to NADH. The remaining molecule gets attached to coenzyme A through an unstable bond. Alpha-ketoglutarate dehydrogenase catalyzes the reaction.

Step 5: GTP is generated by the displacement of CoA by a phosphate group and transferred to GDP.

Step 6: In this step, FADH2 and oxidizing succinate are formed, when two hydrogens are transferred to FAD.

Step 7: The substrate gets oxidized and NAD+ is reduced to NADH and oxaloacetate is regenerated.

Both the pathways produce energy for the cell, where Glycolysis is the breakdown of a molecule of glucose to yield two molecules of pyruvate, whereas Kreb cycle is the process where acetyl CoA, produces citrate by adding its carbon acetyl group to oxaloacetate. Glycolysis is essential for the brain which depends on glucose for energy.