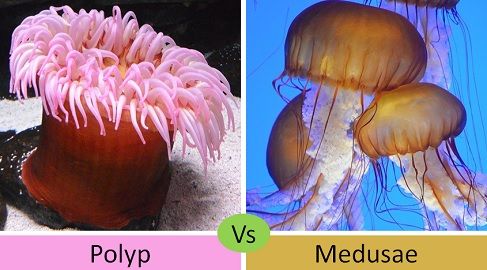 The phylum Cnidaria has about 13,000 different species. The cnidarians come into two basic forms – polyp and medusae.

The polyps are sessile tubular-bodied organisms which remain attached to the solid anchor like rocks. The main characteristic of them is the single, circular and terminal mouth that faces upwards to the water. They are primitive organisms that lack sense organs, velum and manubrium. The tentacles of polyps are located around the mouth region, forming a ring of tentacles in the upper body.

The medusae are the freely moving umbrella-shaped cnidarians. Their main characteristic is the 4-sided mouth that faces downwards. They are self-evolved species with photoreceptors, statocyst, velum and manubrium. The tentacles of medusae are present around the central body and hang downwards from the marginal ends.

This content explains the key difference between polyps and medusae in detail. So, let’s start.

Polyps are the first of the two types of cnidarians. Their main characteristic feature is the presence of a ring of tentacles around the mouth. They are sessile cnidarians which remain anchored at one position.

Polyps are tubular-bodied organisms with a free upper end and fixed bottom end. The mouth and tentacles face upwards to the water. They can be solitary such as sea anemones or can be colonial, like corals. 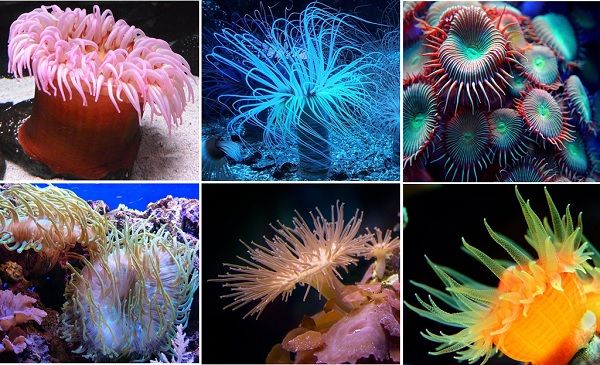 They are sessile cnidarians that remain anchored to the substrate by the adoral end. The anchor is mainly rock or solid corals. They attach via a pedal disc which is a disk-like holdfast.

The class anthozoans possess tubular stomodaeum which begins from the mouth and extent up to the gut. They can reproduce asexually. But very often they undergo sexual generation, by which they get modified into medusae.

The body of a polyp is just like a sack. Their body wall is composed of two cell layers. The outer layer is the ectoderm, while the inner layer is the endoderm. We also refer to endoderm as gastrodermis as it encloses the stomach region.

A supporting layer is present between the ectoderm and endoderm, known as mesoglea. The mesoglea is made up of structureless gelatinous material that is released by the cell layers of the body wall. The thickness of mesoglea may vary, i.e. it can be very thin or can be fairly thick. Often, it bears skeleton components formed by cell migration. 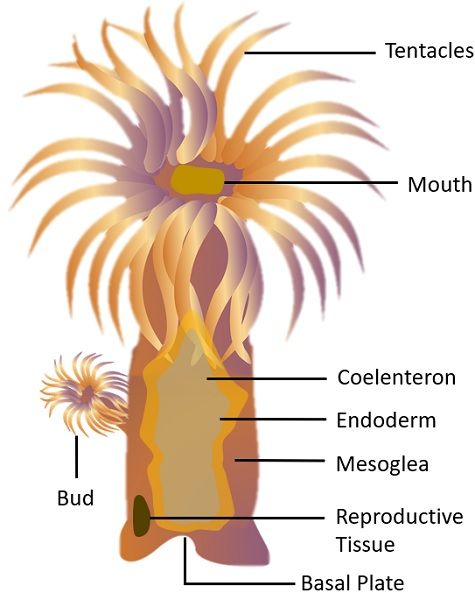 The medusae are the second type of mobile cnidarians; thus, they keep swimming the entire water body. We consider them soft bodies due to their gelatinous appearance. The external appearance of medusae is just like an umbrella or saucer with numerous filaments hanging from it.

The umbrella-like upper bell has the ability to perform muscular contractions. This helps in acquiring propulsion and locomotion for swimming. 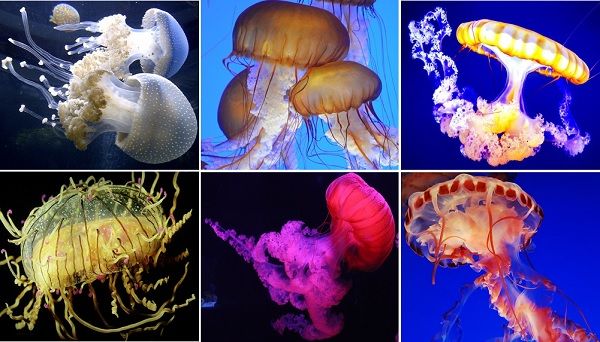 The hanging filaments are nothing but tentacles. These trailing tentacles are very helpful to the medusae as they play a part in capturing the prey as well as defending them against predators. There are several different types of tentacles present according to the different species. They also bear several receptors like photoreceptors, statocysts (Gravity receptors) etc.

The mode of reproduction in medusae is mainly sexual, yet their development process varies with different classes. For instance, the class hydrozoan is developed by budding. The class Cubozoan or Rhizostomae was developed by the metamorphosis of a polyp.

The medusae also have an outer layer as ectoderm and an inner layer as endoderm. And in between them is a thick mesoglea. 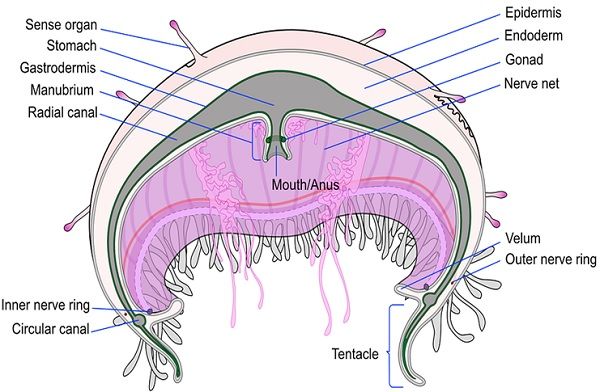 Key Differences Between Polyp and Medusae

The phylum Cnidaria comprises hydroids, sea anemones, corals, jellyfish etc. Together this phylum aids in upholding the diversity of the underwater organisms by playing the roles of food, predators and shelters for other organisms like filter feeders.

The polyps and medusae are the two types of Cnidaria whose appearance, way of functioning as well as habitat; all differ from one another. Here, you will get a detailed idea of the major characteristic difference between these two types.