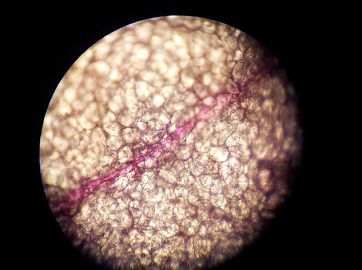 Mitochondria are known for generating energy for the cell in the form of ATP (adenosine triphosphate) by using nutrients and oxygen. The chloroplast is present in green plants and few algae, they are known as the place, where the process of photosynthesis occurs.

In the cell of the eukaryotes, there are only three organelles, which are bounded by the double membrane structure – the nucleus, the mitochondria, and the chloroplast. There is the higher level of diversity on the surface of the planet. Living things inquisitively, perplexingly uses the sources present here and grow. They have populated the land, water, and molded the surface of the earth.

Living things are not only restricted to the domain of the land, water, instead found in depth of the ocean, in the mud of hot volcanoes, beneath the frozen surface of Antartic and deeply buried in the earth crust. In this section, we will consider the two main units of the eukaryotic cells – The Mitochondria and the Chloroplast.

The first one is the most significant body present in the living cell, they are the producer of energy to the cell, and it’s organelles by the process of cellular respiration. Their shape and function resemble bacteria, even they have their own circular DNA and ribosomes and their tRNA, like that of bacteria.

The latter – Chloroplast, is the another enclosed membrane of the eukaryotic cell. These are found in selective types of the cell as said above. Chloroplast performs the function of the preparation of the food that is photosynthesis, by using the sources like sunlight, water, and air. Even it is acceptable that chloroplast had their genome and originated from the symbiotic photosynthetic bacteria.

Mitochondria is derived from the Greek word where ‘mitos‘-thread and ‘chondrios‘-granule. Mitochondria are also known as the ‘powerhouse of the cell‘ as it’s the main function is to produce energy in the form of ATP.

The mitochondria are the bean or rod-shaped structure. The diameter ranges from 0.75-3um, but vary in sizes. In a typical cell, it occupies around 25% of the total cell volume. In a cell, the number of mitochondria present depends on the metabolic requirements of that particular cell and therefore it can be thousand or a few. It is the double membrane structure, the outer and the inner membrane. 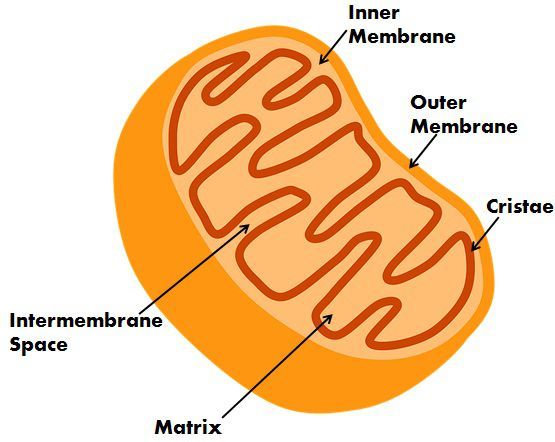 In the process of synthesizing energy that is ATP, the mitochondria use the oxygen and nutrients, this process is called as Aerobic respiration. This is the much more efficient way of producing ATP than in anaerobic respiration.

Apart from the synthesis of energy for the cell, mitochondria also help in cell signalling, regulation of cell cycle, cell growth, cell death, as well in cellular differentiation.

The exception is the mature mammalian red blood cells, where mitochondria are absent. It is believed that mitochondria used to exist as the independent prokaryotic cell once. But due to the process of endosymbiosis, they got engulfed and became the part of the eukaryotic cell. This is the reason, that why mitochondria contain its own DNA, and shows similarity with the prokaryotic cell (bacteria).

Though cellular respiration is not a simple process, the process involves three main steps: glycolysis, the citric acid or Krebs cycle, and ATP synthesis. Further, the ATP released from the mitochondria is used by the other organelles, present in the cell.

As said above, chloroplast is one of the double-membrane organelles of the cell. These are found in green plants and green algae. The chloroplast is the site of photosynthesis, having their genome. These are the complexed structure, having the size of around 10um and 0.5-2um in thickness. 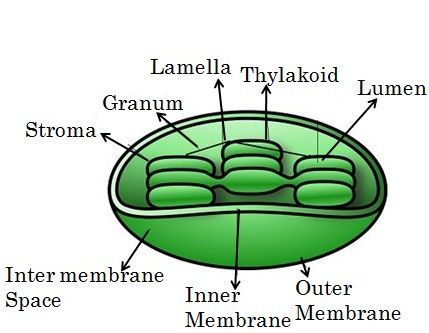 Another important part is chlorophyll, which is a green pigment and plays its role in capturing the sunlight, this is also present in thylakoid. The thylakoid membrane also contains enzymes and other light-absorbing pigments, that are used in producing energy in the form of ATP (adenosine triphosphate).

Key Differences Between Mitochondria and Chloroplast

Following are the key difference between the two most important organelles of the cell:

From the above article, we came to know that, being one of the most important parts of the eukaryotic cell, both the organelles are essential and contribute equally to the growth and function of the cell. It is also concluded that earlier mitochondria were the free-living aerobic bacteria, which became part of the eukaryotic cell due to some process.

Chloroplast, is not the part of all eukaryotic cell, as it is found in green plants and few algae. As these play the main role in process photosynthesis, through which plant prepare their food with the help of sunlight.