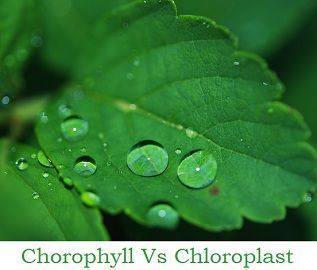 The main role of chloroplasts is to carry out the photosynthesis, containing many reactions like Light reaction and carbon assimilation reaction. Hence we can say that entire process of photosynthesis takes place in chloroplasts, whereas the role of chlorophyll is to reflect green color and absorbs blue and red wavelength. Like that of mitochondria, chlorophyll is called the ‘powerhouse‘ of the cell, as it is only responsible for ATP synthesis and other reactions.

One should have the basic knowledge of cells in order to understand their organelles and its functions deeply. As we know both chlorophyll and chloroplast are parts of a plant cell, and not of animal cells. In the provided article we will consider the difference between both entities along with the general discussion on them.

Chlorophyll is a vital plant molecule, that plays an important role in mixing and arranging the plant’s food in the process called photosynthesis. It has a similar structure to that of heme group of hemoglobin and cytochromes and is derived from protoporphyrin which contains polycyclic, plana tetrapyrrole ring.

Photosynthetic organisms contain various types of chlorophyll such as Chl a, Chl b, Chl c, Chl d. These molecules differ in their substituents group on the tetrapyrrole ring. It contains

1.The central metal ion as Mg2+.
2.A cyclopentanone ring attached with a carboxylic ester group, with pyrrole ring fused to it.
3.The pyrrole ring IV of Chl a and Chl b contains two extra hydrogen atoms. In bacteriochlorophylls rings, II and IV are in reduced form.

Chlorophyll mostly absorbs in blue and somewhat red portions of the electromagnetic spectrum, hence it reflects green color. In producer (autotrophs) these green color traps light energy from the sun, which combines with carbon dioxide and water into sugars.

This process is for the preparation of food in photosynthesis and further, it helps in gaining energy for the body growth. That’s why chlorophyll is called light-absorbing pigment or photoreceptor. 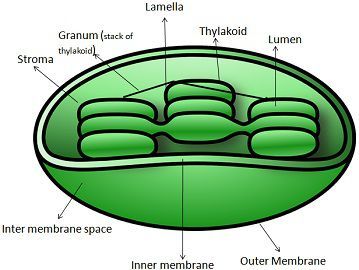 Whereas the aqueous phase of the inner membrane – the stroma contains most of the enzymes required for carbon assimilation. Thus thylakoid membrane present in the chloroplast is the location for ATP synthesis and Light reactions. This ATP is used by stroma to store trapped energy in the form of carbon-carbon bonds of carbohydrates.

As Chloroplast is found in bacteria, it divides by the process of binary fission, as occur in bacteria. The chloroplast is considered as the semi-autonomous structure and contains 70S ribosomes (prokaryotic-type).

Key Differences Between Chlorophyll and Chloroplast

Following are the key differences between chlorophyll and chloroplast:

We can say that there are many distinguishing features found in plant cell and animal cell structure, like chlorophyll and chloroplast which are present only in the plant cell, especially in green plants.

Chlorophyll is the part of chloroplast and is the light absorbing pigments which provide green color to the plants, but chloroplast traps the solar energy, which is the site of photosynthesis and other chemical reactions and works as the ‘powerhouse of the cell’ like mitochondria.