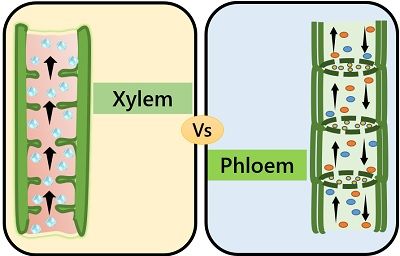 Both the xylem and phloem are complex permanent tissues. But they perform different roles in plants. The xylem facilitates the transportation of water from roots to the other part of the plant. Whereas the phloem aids the translocation of photosynthesized food material from the source to the other part.

The xylem flow is unidirectional and occurs only from roots to the upper plant body. In contrast, the phloem carries the food material in a bidirectional manner from up to down and vice versa.
In this segment, we will be learning the differences between xylem and phloem. 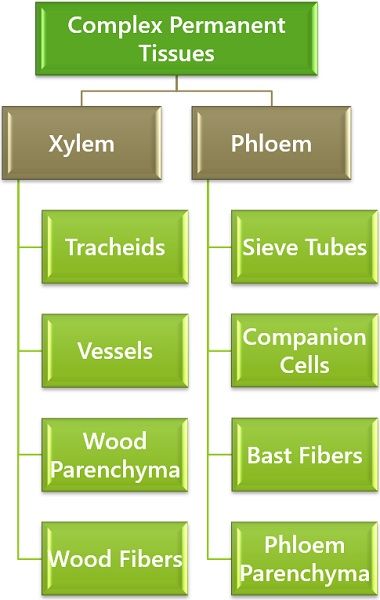 The word xylem has its origin from the ancient Greek term xylon, which means wood. This term was first given in the year 1858 by Carl Nageli. Xylem is a permanent, complex vascular bundle required to transport sap and water. They become hard with the gradual growth of a plant and transform into the wood.

The xylem tissues carry water, salt and minerals only from the root region to the upper plant organs. Thus, this flow is unidirectional only.  These tissues have to carry the materials against the gravitational pull. 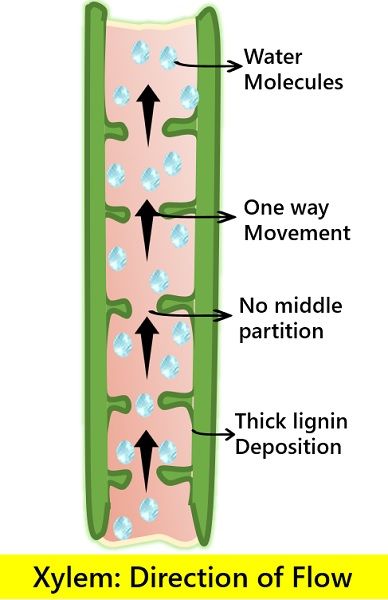 The major function of the xylem is to carry and supply the water from roots to the other plant parts. The water can act as a limiting agent in the plant’s growth, development, and productivity. It also determines the vegetation of a particular area. Thus, we can guess the importance of water transport in the plant from this.

Xylem tissues transport the water, minerals, salts and other inorganic material from roots to the different plant parts. This material flowing through the xylem is referred to as xylem sap. The system which enables this transport in the upward direction, i.e., against gravitational force, is known as capillary action. This mechanism of capillary action relies on the surface tension of the liquid.

Note: This movement of xylem sap doesn’t require any external energy, and thus, it is a type of passive transport.

All types of xylem perform the same function. But we can classify the xylem based on the type of growth- Primary and Secondary.

They are generated during the primary growth of the plant. Mainly present in the rapid growth regions like- tips of roots and shoots, flowering bud, etc. . Their function remains the same of transporting the water and sap. Along with this, they elongate the roots and shoots to make the plant longer.

They grow during the secondary growth of a plant. These xylems thereby increase the girth of the plant body that widens the tree trunks. The dark rings that determine the age of the plant are due to these secondary meristems only. They are very prevalent in two plant groups- angiosperms and gymnosperms.

The arrangement of protoxylem and metaxylem in the plant is in four patterns: 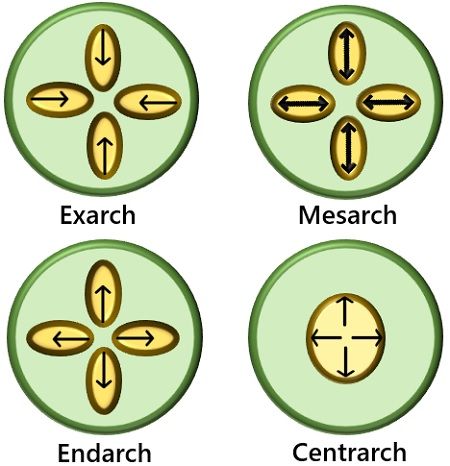 What are the Components of the Xylem?

Xylem comprises four types of cells in which, some of which are living and some of them are dead.

2. Vessels: Also known as Tracheae. These ar4e long cylindrical tube-like cells. They gradually lose their protoplasm thereby are dead at maturity. These cells are interconnected with the small holes in the common walls for the passage of material. The walls of these vessels are hard due to lignin deposition but are not very thick. The cellular ends are generally round.

4. Xylem Parenchyma: These are the only living component in the xylem tissue. Their primary purpose is storing starch and food. They help in the conduction of water over shorter distances. 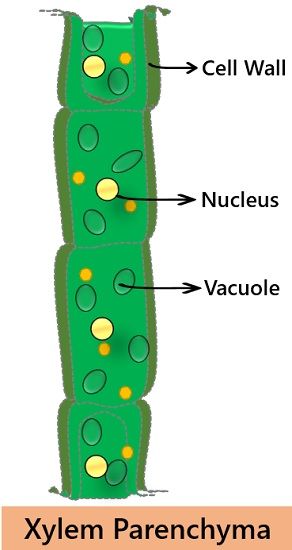 Like xylem, the term phloem also originates from the ancient Greek language. It comes from the pholoios, which refers to ‘bark’. Carl Nageli introduced it in 1858.

Phloem is the complex permanent tissue responsible for the conduction of food material in plants. Green plant parts produce organic food with naturally available inorganic matter during photosynthesis. Phloem plays the role of the conductor to transport this food material to the different plant parts for uniform growth.

Note: The process of food transportation in plants via Phloem is called translocation. 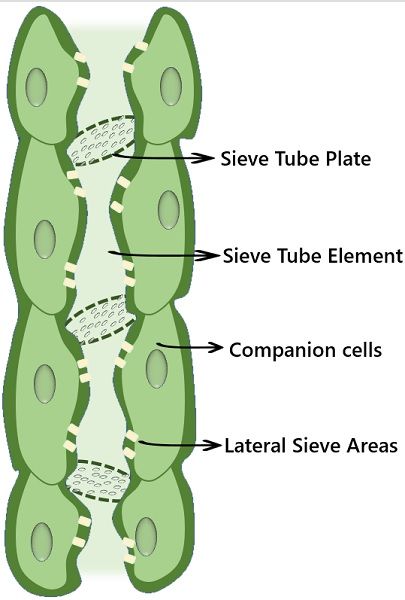 For long-distance transport of food material, the Phloem is the only tissue. The food generated in the source organs is efficiently carried to the sink organs for their sustainable growth. The translocation mechanism relies on different hydrostatic forces between the source and sink organ. Mainly the turgor pressure translocates the food assimilates.

The translocation process is an active type of transport that demands energy in the form of ATP. The Phloem utilizes the turgor pressure for transportation purposes. The higher solute concentration inside the cell will create an osmotic gradient. This will draw the water from the nearby xylem to establish the equilibrium. The now generated sugar solution will exert a high turgor pressure over the walls of Phloem. The turgor pressure pushes the soluble sugar molecules to move the phloem tube, further moving to the sink organ.

As soon as the sink gets the soluble sugar, it gets accumulated by the part where it is required. With the gradual reduction in the sugar concentration, the amount of water influx from the xylem also falls. Thus, the sink tissues experience low pressure. In this way, the food material gets transported constantly around the plant sink organs, i.e., between higher and lower pressure areas.

As we all know, the green plant part synthesizes the food and thus are the sources. While the other non-green plant parts like roots are sink as they utilize the food translocated through Phloem. Since the green leaves are part of the shoot system, the movement is from up to down.

But during early springs or autumn, the plant’s significant food sources shed off. In this scenario, the soluble sugars present in the roots move upward to nurture the growing buds and leaflets. Thereby, it is very evident that the flow of phloem transport is bidirectional, i.e., from upward to downward and vice versa. 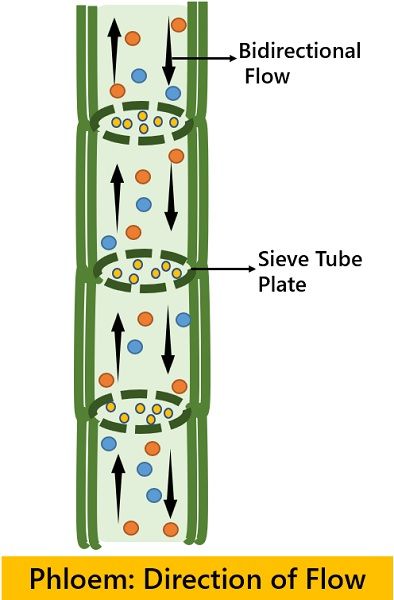 The Phloem has its prime components: 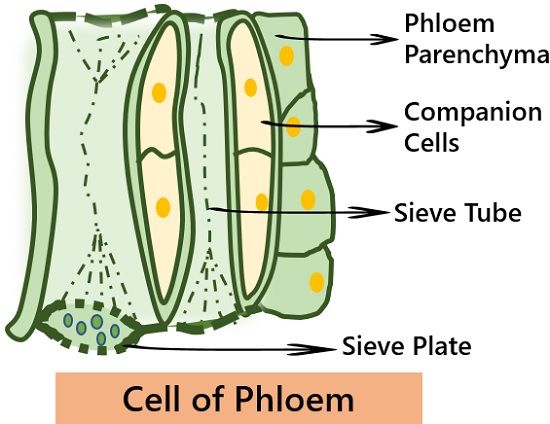 Key Differences Between Xylem and Phloem

The two most important complex kind of tissue, constituting vascular bundles is the xylem and phloem. We discuss the role that the xylem is responsible for transporting water and other soluble materials in the plant unidirectionally.

On the contrary, the role of phloem is to transport the food and other organic material produced by leaves (through the process of photosynthesis). Hence both the vascular tissues have their equal importance, which is necessary for the growth of the plants.