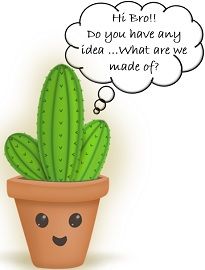 Just like animals, plants too have a unique and complex living pattern that is made possible by the numerous tissues making up their body. Plant tissues are classed as meristematic or permanent based on their structure, location, orientation, and function.

The cells of meristematic tissue are smaller, having a six-sided box-like form and a thin cell wall. Cells of permanent tissue, on the other hand, come in a variety of forms and have a rather thick cell wall due to cellulose or pectin deposition.

Another feature that distinguishes them is the existence of vacuole. Since meristematic cells do not need to store food or water, vacuoles are either very small or non-existent. However, because permanent tissues have vast food, water, or oil reserves, the vacuoles in these tissues have a massive shape and size.

In this section, we will try to demonstrate the differences between meristematic and permanent tissue, as well as the modifications and variations that the plant experiences as a result of them.


What are Meristematic Tissues?

The word meristematic comes from the Greek word ‘meristos’ that means ‘to divide’.
Definition: The tissue is composed of identical, immature, constantly diving and differentiating cells and plays a vital role in plant growth and development; such tissues are called ‘Meristematic tissue‘.

Where are the Meristematic Tissues located?

Because of their potential to divide and generate new cells, meristematic tissues are crucial for plant growth and development.  As a result, these tissues are primarily localized in the areas where the plant grows in length and girth. 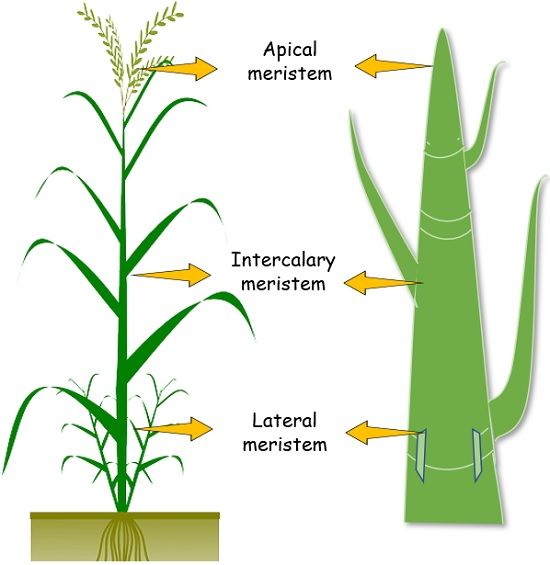 What are the types of Meristematic tissues?

The meristematic tissues can be categorized on the basis of their origination and position.

There are three types of meristematic tissues on the basis of their origination and development:

On the basis of the position of meristematic tissues, they are of three types:

What are the Permanent Tissues?

The plants are living but immobile creatures. Thus, they have certain tissues that facilitate the conduction of materials, provide mechanical support, and store the necessary products. These tissues are permanent plant tissues.

Definition: The tissues made up of a group of non-diving, already differentiated, one or more than one type of similar or complex cells; such tissues are called ‘Permanent tissue“.

Where are the Permanent Tissues found?

Permanent tissues act as transporters because they are responsible for conducting essential components throughout the plant’s body. They are also required to make the plant stronger and thicker.

To fulfil these roles, the permanent tissues can be found in practically every section of the plant, from the shoot to the root region.

What are the types of Permanent Tissues?

On the basis of cellular composition, the permanent tissues are classified into two categories:

These are referred to as simple as they are made up of only one type of cell, resulting in homogeneity throughout the tissue.

They are categorized into three different types on the basis of different parameters:

These are constructed using clusters of isodiametric cells that have an oval, spherical, or polygonal shape. They have intracellular gaps and a cellulose cell wall that is not very thick.

Collenchymatous tissue is made up of living cells with unevenly thick cell walls. Because of the significant deposition of cellulose and pectin, the cells are thick at the corners and connecting ends between two cells. 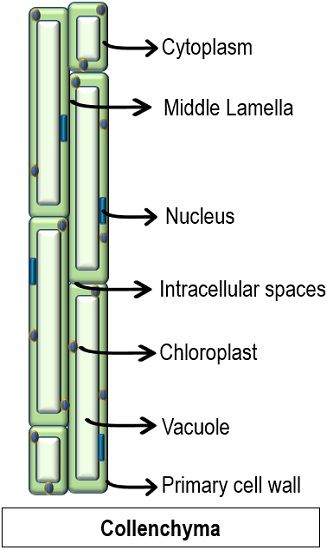 Sclerenchyma is the hard tissue that is made up of cells with very little protoplasm and a very thick cell wall. Because of the extensive deposition of lignin, the cell walls are thick. Due to this thickness, they often lack intracellular spaces.

These permanent tissues are called complex as they are made from multiple types of cells. All different forms of cells collaborate and coordinate to perform a specific function.

Complex permanent tissues are also known as vascular tissues. They act as conductors, forming a network of pipes that transport food, water and other chemicals throughout the plant.

Based on the material transported, the complex permanent tissues are classed as:

The xylem is a type of vascular tissue that facilitates the plant to move water and sap throughout its body. Plant roots are liable for absorbing water from the earth. As a result, the xylem only transports water in one way, from the roots to the rest of the plant body. 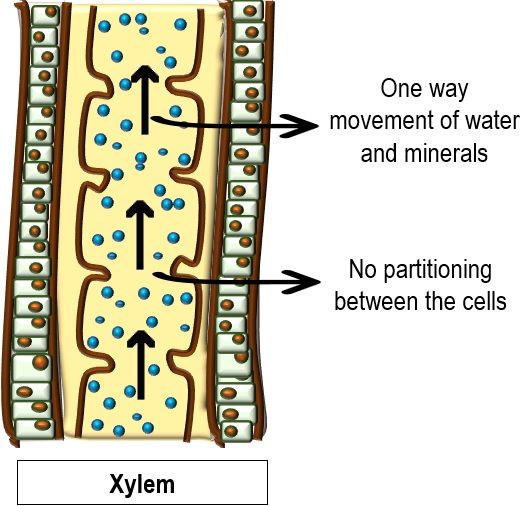 These vascular tissues translocate organic food that has been created by photosynthesis. Because the leaves (and other green portions) are the plant’s kitchen, these tissues transport the materials both ways from up to down and vice versa. Mainly from leaves to the other parts of a plant. 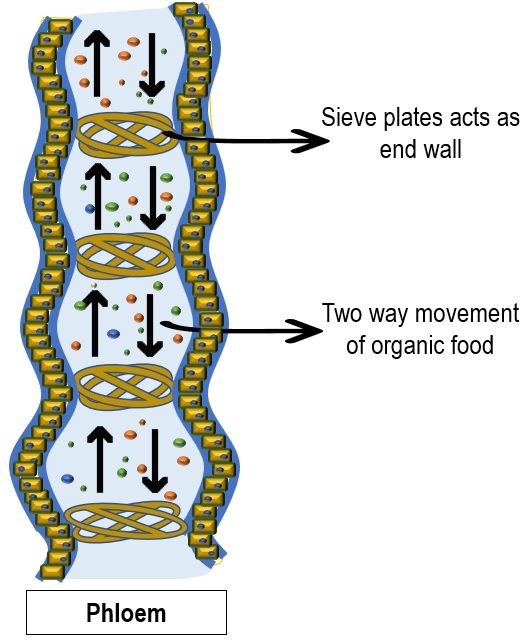 All of these cells are living except phloem fibres.

Tissues are a collection of cells that work together to perform a certain job. Plants have intricate lifestyles; thus, each and every tissue is assigned a particular role. The plant tissues are categorized as meristematic and permanent based on their division potential, purpose, and position.

Meristematic tissues are made up of identical, living cells which actively divide and differentiate to assist plant growth. They are restricted to particular locations like root and shoot apices, peripheral margins and internodes.

The other way around, the formation of permanent tissues is the result of the combination of more than one type of cell. These tissues constitute alive or dead cells, which have thick cell walls and giant vacuoles. Their prime function is to transport the essential chemical components within the plant body.

Despite the fact that the functions of both tissues are mutually incompatible, both of them must collaborate and coordinate for the plant’s proper growth and development.