People frequently get confused between absorption and adsorption as they spell similar. But the mechanism by which two substances interact with each other clearly differentiates these two physio-chemical processes.

In simple words, absorption takes the molecules, ions or particles inside its physical structure. While adsorption only attaches them to the surface without taking them inside.

Here, we will discuss some of the key differences that exist between absorption and adsorption.

Absorption is a very common term and well-known phenomenon. It is a simple process where particles of one substance enter into the empty space of the other substance.
The absorbed material remains intact within the empty spaces of other substances without any chemical interaction with the absorbing material.

It may or may not require energy. For instance, absorption via diffusion doesn’t need energy, but active transportation requires energy. 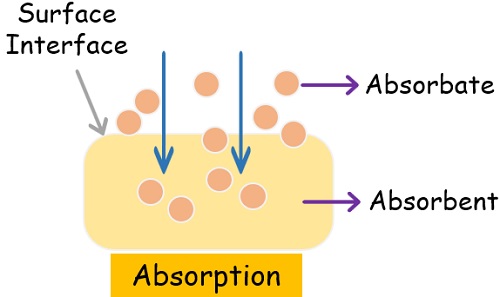 “The bulk process where one substance enters inside the physical structure of another substance is adsorption.”

There are two main components in the process of absorption- absorbate and absorbent. 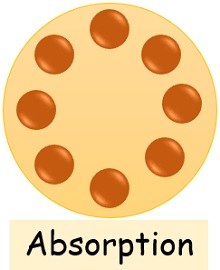 The rate of absorption varies as per the following elements:

Adsorption is strictly a surface phenomenon that is completely different from absorption. It is a simple mechanism by which particles of one substance get attracted to the particles of another substance. As a result of this attraction, the former particles adhere to the surface of the other substance.

While adsorption, a relatively small amount of the substance experiences molecular forces and gets attracted to the exterior surface of the bulk substrate.

“The phenomenon where the particles of gas/liquid substances adhere on the surface of other liquid/solid substances is known as adsorption.”

Note: The intermediate surface that serves as a platform for the process of adsorption is ‘interphase’. 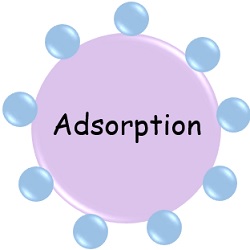 The mechanism of adsorption is similar to that of surface tension. The energy of the adsorbent particles and adsorbate neutralizes when they come in contact at the interphase.

The adsorption occurs as a result of the forces acting on the surface. Particles at the interior of the adsorbent remain surrounded by more atoms on their upper side.

But this is not the same condition for the atoms at the surface as they have no outer layer.

As a result, the inner particles remain balanced while the outer ones are unbalanced. Consequently, the unbalanced forces attract adsorbate particles to establish the required balance. This leads to the phenomenon of adsorption.

There are three types of adsorption:

1. Physisorption: It is the physical adsorption that occurs due to the weak Van der Waals forces between the particles of adsorbate and adsorbent. For instance, when the gases such as hydrogen and nitrogen get adsorbed on the surface of the charcoal, it is physisorption.

Examples of some most commonly used adsorbents 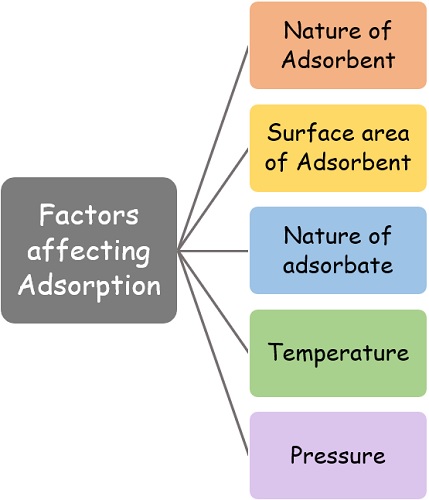 The adsorption process is useful in varied sectors, including domestic, medical, industrial and biological.

Some of the basic applications are as follows:

In some cases, the process of adsorption and absorption occurs subsequently. This implies that the adsorption is followed by absorption.
For example, when a chalk stick comes in contact with ink, its molecules adhere there due to the adsorption. But as the time passes, the chalk stick starts getting the colour of ink. This is because of absorption.

Key Differences Between Absorption and Adsorption

Absorption and adsorption are the kinds of homophones, but their meaning and application differ. This content will brief the major differences between these two processes with a comparison chart, diagrams and examples.