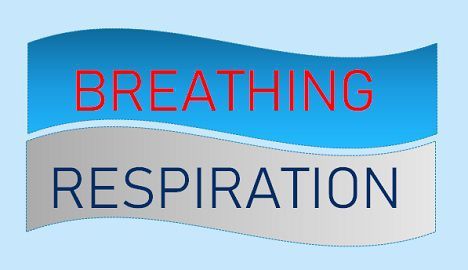 Breathing is distinct from respiration in many ways, though both are essential for living organisms. As discussed above the mechanism of breathing is associated with the respiratory organs like the nose, lungs, etc., while respiration takes place in each cell of the body.

All living beings have one thing in common, which is ‘cell‘, of course, these can be unicellular or multicellular, prokaryotes or eukaryotes. But these cells are only the building blocks and are responsible for carrying out all the internal function properly. Along with the cells, enzymes, catalyst, and other factors also play a crucial role in various processes of the body.

With the way to highlighting the points on which the two terms ‘breathing and respiration’ differs, we will also focus on their mechanism.

Breathing is voluntary, biophysical action performed by the body, to inhale and exhale the air through the lungs. The process takes place by contracting and expanding the ribcage (chest) which involves the muscles present between the ribs, and the diaphragm is one of such muscles. It is a layer of muscle, which is present between the abdominal cavity and the thoracic cavity.

The diaphragm pulls air into the body, when it moves downwards and when air rich in oxygen is reached inside the lungs (at least 20% of valuable oxygen), it is transported to the cells of the body via the bloodstream, and then the process of respiration is triggered in the cells. Breathing is also termed as ventilation.

Respiration is the involuntary, biochemical action, performed by the cells of the body. In this mechanism, the glucose and oxygen are converted into water and carbon dioxide and thus releases energy in the form of ATP.

As we all know energy is needed by the organism to perform various task physically as well as chemically, like it is used for movement, growth and repair, control of body temperature, etc. The energy is obtained by the chemical reaction known as respiration. This reaction occurs in all living beings like plants and animals cells.

There are two types of respiration, Aerobic and Anaerobic. In the aerobic respiration, oxygen and glucose are required to produce water and carbon dioxide and releases energy. This reaction takes place in mitochondria of the cell.

Anaerobic respiration is required when we do hard exercises or running, or in the case when there is insufficient oxygen to carry out the aerobic respiration. Though the energy production is less than aerobic respiration, and it also produces lactic acid, which is responsible for causing tiredness and pain which results in muscles cramping.

Anaerobic respiration also occurs in microorganisms like bacteria and Yeast which are useful for the fermentation process. These are used in making brewers and wine, while carbon dioxide is used in making bakery products.

Key Differences Between Breathing and Respiration

Following points will exhibit the essential differences between breathing and respiration:

From this article, we can say that breathing and respiration are not synonymous of each other, though they are a vital process taking place in the living being. We also came to know that breathing is an exchange of gases between the outer environment and lungs, it is done to absorb oxygen and transfer it to the cells, which further use for producing energy by breaking down of glucose and this is called as respiration.