The inhalation and exhalation are the two basic mechanisms involved in the process of breathing. These processes facilitate the exchange of oxygen and carbon dioxide.

During the process of inhalation, the diaphragm contracts and moves in a downward direction. And the ribs move outwards and upwards. These movements cause an increase in the intrapulmonary volume and the expansion of the thoracic cavity.

As the volume inside increases, the intrapulmonary pressure falls down. So, in order to balance it, the gas molecules travel from the outer atmosphere into the lungs. This process is referred to as inhalation.

In contrast, the diaphragm relaxes and moves in the upward direction during exhalation. The ribcage moves in and down to its normal positioning. These changes lead to the contraction of the thoracic cavity and reduce the intrapulmonary volume.

When the volume decreases, the internal pressure automatically increases beyond atmospheric pressure. Thereby leading to the movement of gas molecules from inside the lungs to the outer atmosphere. This process is termed exhalation.

In this post, we will study the difference between the process of inhalation and exhalation in brief.


Components of the Respiratory Tract

The lungs remain surrounded by a type of serous membrane known as visceral pleura. Above which there is another serous layer surrounding it called parietal pleura. Between these two layers, there is a pleural cavity filled with pleural fluid.

The bones enclosing the entire respiratory system form a cage-like structure called a ribcage. The ribs remain interconnected by the intercostal muscles.

The breathing mechanism relies on one most important phenomenon that any gas tends to move from the area of higher concentration to that of lower concentration. You can understand it similar to that of diffusion.

The atmospheric pressure outside the body remains constant at 760 mmHg. Similarly, the intrapulmonary pressure inside the lungs is also 760 mmHg complementing the external pressure. 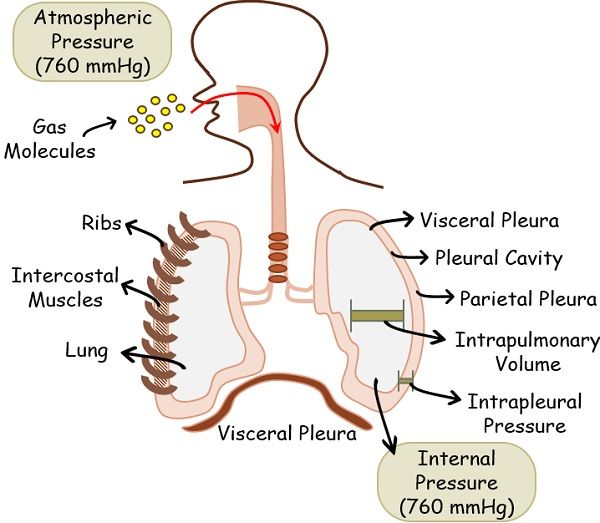 The term inhalation simply means to inhale the air inside. The process of inhalation is also known as inspiration.

The process of inhalation begins when the diaphragm contracts in a downward direction. The intercostal muscles between the ribs stretch, pulling the ribcage upwards and forwards.

These movements expand the area of the thoracic cavity and the intrapulmonary volume inside the lungs increases. This led to the decreased intrapulmonary up to 759 mmHg, i.e. 1 mmHg negative difference below the atmospheric pressure.

And as we know that the gases tend to move from higher to lower pressure zone. Thus, the air will start flowing from the outer environment inside the lungs down its pressure gradient to establish the balance again. 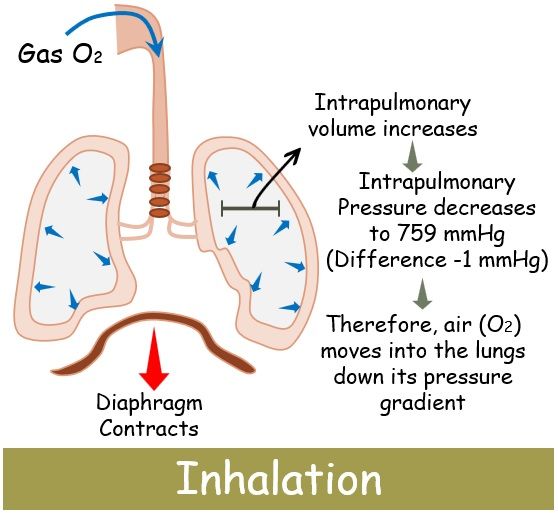 Do you know, What happens inside the lungs?

As soon as the lungs expand, air enters through the nose or mouth. This air travels downward through the windpipe and into the lungs. The air certainly reaches the alveoli, after passing through bronchial tubes.

The air passes to the nearby capillaries (blood vessels), through the thin walls of the alveoli. Now, this air (oxygen) moves to the blood from the air cavity with the help of a protein called haemoglobin.

Simultaneously, on the other side, the carbon dioxide also shifts from capillaries to air sacs. The movement of gas is through the pulmonary artery into the bloodstream from the right side of the heart. Further, this blood rich in oxygen is carried to the pulmonary veins through a network of capillaries.

Exhalation is the process where the body exhales out the air from the lungs. The process of exhalation automatically begins after inspiration.

As soon as the inhalation ends, the diaphragm relaxes and comes to its original position. This causes the rib cage to move inwards and downwards, thereby decreasing the area of the thoracic cavity.

Ultimately the lungs contract, and the intrapulmonary volume inside decreases. This decrease in volumes leads to the increased intrapulmonary pressure inside to 761 mmHg. The pressure increases by positive 1 mmHg from the outer atmospheric pressure.

The randomness of the gas molecules taken in via inhalation rises, intensifying the pressure. Gradually, the area in the chest gets decreased and air rich in carbon dioxide is forced to move out of the lungs.

So as per the rule, the gases, including air, tend to flow from higher to lower concentrations. Thus, the air molecules start moving from the lungs to the outer environment down its pressure gradient to balance again. 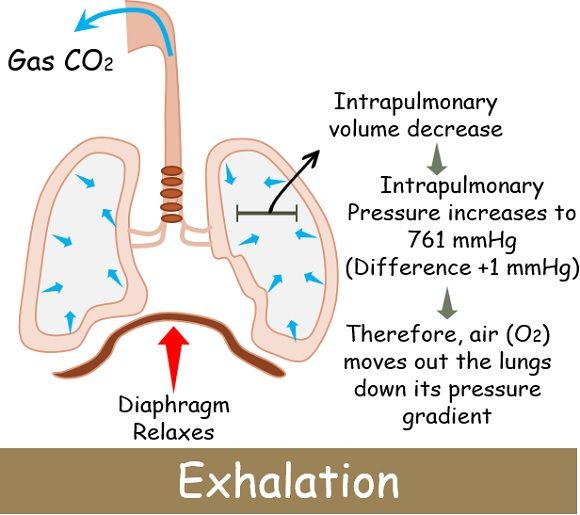 Key Differences Between Inhalation and Exhalation

Simply we can say that the giving and taking process is called breathing. In this process, while breathing we take in air rich in oxygen from the atmosphere and give out the carbon dioxide back to the atmosphere. This air (carbon dioxide) is utilized by the plant during the daytime in the process of photosynthesis. And hence the cycle goes on continuously, which is significantly important for all living beings.