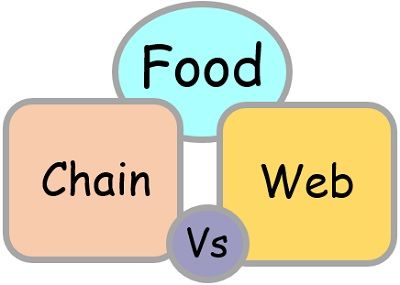 Both the food chain and food web are the systems that portray the actual energy flow process in an ecosystem. The existence of our earth relies on this energy circulation between different organisms.

The food chain is a simple representation that illustrates the linear passage of nutrients and energy. The producers initiate this energy flow and it ends with the apex consumers. In contrast, the food web is a detailed presentation that depicts the interconnection between several food chains.

In a food chain, one trophic level’s organism solely depends upon the single preceding trophic level. Here, every particular organism has its specified consumer. Thus, if any of the organisms is removed, it might disturb the whole energy flow. For this reason, the chances of instability in the environment increase.

Whereas, in food webs, one trophic level never completely gets dependent on a single species. Here, the one organism serves multiple roles, i.e., of a producer or a consumer. Thus, the removal of a species never causes significant damage to the ecosystem.

This section will emphasize key differences between the food chain and the food web.


How does the energy flow in the ecosystem?

Energy is the ultimate need of all living organisms on the earth. The absence of energy will cease all the metabolic, physiological and physiochemical activities of the living world. The energy constantly flows from one trophic level to another in the ecosystem. This proportion of energy that circulates defines the energy flow or calorific flow.

For any ecosystem, the sun serves as the primary energy source that possesses 100 % energy. The sun supplies about 85 % of its energy to the plants. Of which, plants only absorb 1-2% of the energy to perform photosynthesis. 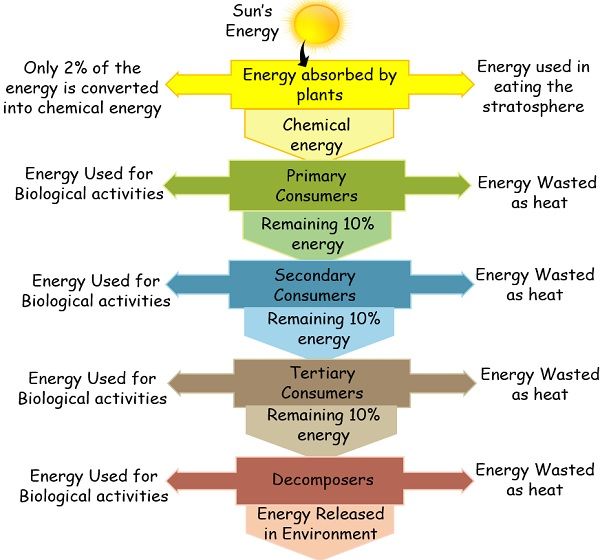 Ten % law: This law proposes that a large proportion of energy deteriorates in the form of heat at every trophic level. And only 10 % of the actual is transferred to the subsequent trophic level.

What is a Food chain?

The food chain is the most elementary and uncomplicated way to represent the energy flow. It is a linear pathway that manifests the movement of nutrients and energy from one trophic level to the next.

Almost all the food chains begin with the producers that are at the basal level. These producers are generally green plants that are capable of performing photosynthesis.

Sun provides its solar energy to the plants which they convert into chemical energy. This chemical energy is then transmitted to the succeeding trophic level. And this way, the flow of energy goes on.

This sequence or series of events depicting who eats whom in a hierarchical way is known as the Food chain. 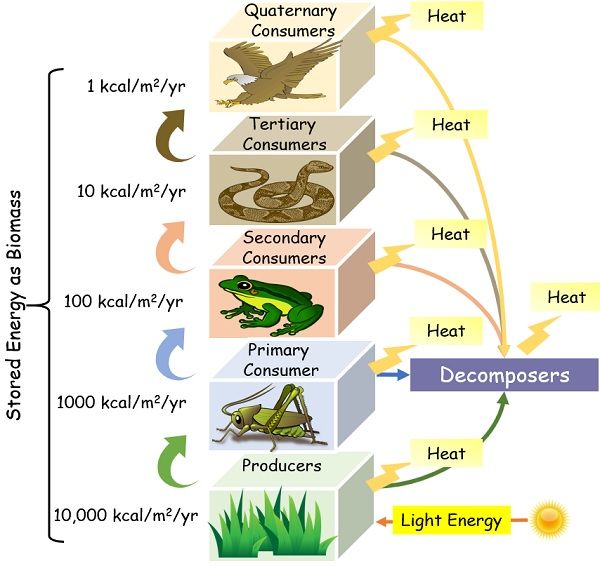 We can define the food chain as:

For example, if the tiger only survives over deer, then the decrease in the number of deers will immensely influence the tiger population.

There are three types of food chains:

2. Parasitic Food Chain: Here, the food chain begins with herbivores and ends with the smaller parasites. The energy flows from larger organisms to smaller organisms, i.e., from host to parasite. 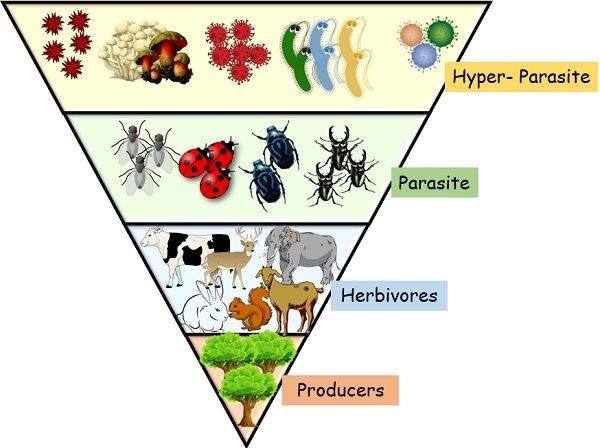 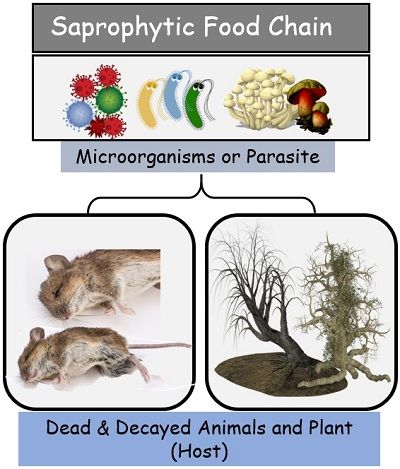 What is a Food Web?

The food web is a complex representation of the energy flow that summarizes all kinds of basic food chains. It portrays the actually occurring interactions among the various species in the real world.

It is a more realistic and dynamic tool to reveal the several different approaches by which the biotic factors stay connected. The food web is not an isolated or linear sequence in any ecosystem. Instead, it is interconnected and interlocked and has multiple trophic levels at the same time.

The Food web is often referred to as a consumer-resource system. It is formed when various food chains operate simultaneously. 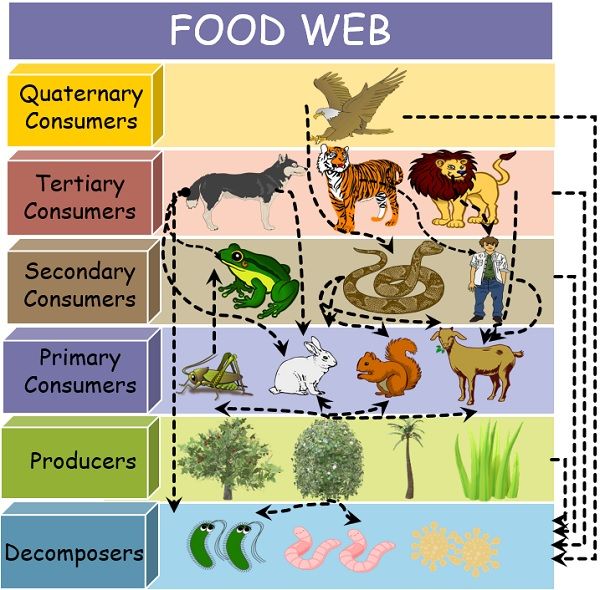 We can define the food web as:

“A complex zigzag representation that exhibits the energy circulation between the multiple trophic levels all at once”.

It infers the availability of biotic communities on the basis of abiotic factors like temperature, photoperiod, etc.
For example, Certain species are seasonal specialists. They decouple themselves from the food chain for their survival. Like in winters, migrating to different places arresting their metabolic action through

Or through aestivation in summers.
This food seasonality impacts the other group of species as they are now bound to feed on the available sources.

These are certain species that decide the stability and sustainability of the ecosystem. Elimination of these organisms might lead to the collapse of the food web.

For example, Grizzly bears are among the top predators in forest ecosystems. The collapse in their number will severely impact the food web.

Given below are the important point which differentiates the Food Chain and Food Web:

Food chain and food web are ecological food maps that define the direction of energy flow. Both of them serve the purpose of understanding the relations between the biotic community. These concepts determine the real picture of the interaction in the environment. But their use might slightly vary as per your need.