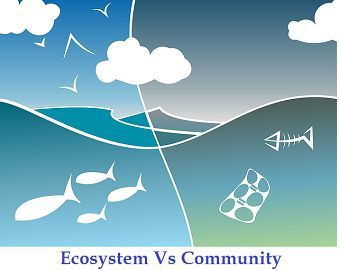 The basic difference between Ecosystem and Community is that Ecosystem consists of various communities which include living as well as non–living components interacting with each other, whereas interaction of different individuals of populations of different species living in a particular geographical area is called Community. The community consists of only biotic factors only.

Our Earth is the only planet comprising life from the microscopic organisms to the large animal.To understand life better with its management, activity, and organization, it is mandatory to know about the few terms like biosphere, biomes, ecology, community, population, and individual.

Among them, there is a heap of confusion between Ecology and Community, as they have a very thin layer of difference but matters a lot. So with the help of this article, we will try to differentiate between the two along with a brief summary.

Ecologist defines ‘Ecosystem is the atmosphere where biotic and abiotic factors interact with each other.’ Here biotic factors include all kinds of living beings like small microorganisms to the big one, interacting with non-living factors which involve sun, river, ocean, mountains, rocks, clouds, etc.

Ecosystems can be of various sizes and can be aquatic, terrestrial, or marine. Ecologist uses two parameters which are resilience and resistance; Resilience is said when there is a disturbance in an equilibrium of the ecosystem, Resistance is returning or the state of equilibrium of an ecosystem.

Each Ecosystem is unique in itself, but it has a few standard components, which are

All living thing varies with one another in different aspects, but it’s not easy them to survive alone hence need the support of others. Therefore community can be defined as interactions of living organisms (biotic components) with different types of species living together in the same environment as well in a particular region.

The community is a part of the ecosystem only, which consist of populations of different types of species together. There is the level of hierarchy which is followed to reach the top level called ‘Biosphere.’ The biosphere is the point where all the biomes, ecosystems meet, and it is a sum of all the factors right from the individual level to the biomes.

Key Differences Between Ecosystem and Community

Ecosystem and Community are the part of the Biosphere, but they differ in their composition, following are the substantial difference between them:

The biosphere consists of all significant levels which include entire things of the earth right from individual to biome and is well organized; it is the combinations of all the ecosystems, community. As we all know that individual can’t grow alone, everyone depends on each other for one or the other things.

As above discussed an ecosystem is the diversity of many communities of organisms where they interact with living (biotic) as well as nonliving (abiotic) thing whereas community contains the variety of populations of different species linking with each other in a region.