The adhering property of an atom, in order to arrange themselves in a most stable pattern by filling their outermost electrons orbit. This association of atoms forms the molecules, ions or crystals and is referred to as chemical bonding.

There are two categories of chemical bond on the ground of their strength, these are primary or strong bonds and secondary or weak bonds. Primary bonds are covalent, metallic and ionic bonds, whereas secondary bonds are the dipole-dipole interactions, hydrogen bonds, etc.

On the way of highlighting the difference between the three types of bonds, we will be reviewing about their nature along brief description.

The covalent bond is observed in an element which lies towards the right of the periodic table which is non-metals. Covalent bonds involve the sharing of the electrons between the atoms. The pairing of the shared electron, produce a new orbit around the nuclei of both the atoms referred to as molecule.

There are strong electrostatic attractions between the two nuclei of an atom and the bond is formed when the total energy while bonding is lower than the energy which was earlier as individual atoms or nearby electronegative values.

The covalent bonds are also known as molecular bonds. Nitrogen (N2), hydrogen (H2), water (H2O), ammonia (NH3), chlorine (Cl2), fluorine (F2) are some of the examples of the compounds having covalent bonds. Sharing of electrons allows the atoms to obtain the stable outer electron shell configuration.

As a hydrogen molecule, H2 contains two hydrogen atom which is linked by the covalent bond with oxygen. These are the attractive forces between the atoms occurring in the outer most orbit of the electrons.

Due to the presence of the delocalized or free-electrons of the valence electrons, Paul Drude came up with the name “sea of electrons” in 1900. The various characteristics properties of the metals are; they have high melting and boiling points, they are malleable and ductile, good conductors of the electricity, strong metallic bonds, and low volatility.

The metals in the outer most orbit have only a few electrons, therefore by losing such electrons the metal achieve the noble gas configuration and thus satisfy the octet rule. But on the other hand, the valence shell of non-metals have only 8 electrons and therefore by accepting the electrons they attain noble gas configuration. The total net charge in the ionic bond must be zero. The acceptance or donation of the electrons can be of more than 1, in order to satisfy the octet rule.

Let’s take the prevalent example of the Sodium Chloride (NaCl), where the outermost orbit of the sodium has one electron, while chlorine has seven electrons in the outermost shell. 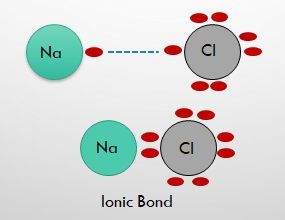 Given below are the points which differentiate among the three types of strong or primary bonds:

In this content, we studied the different types of strong bonds and their various properties by which they vary from one another. Though they have certain similarities too. The study of these bonds is essential to identify them and can use them carefully and wherever needed.