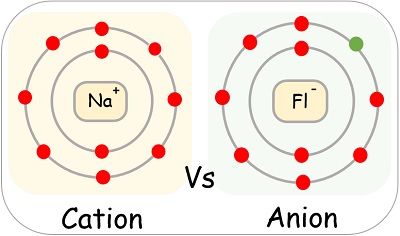 We can divide the ions into two categories: cation and anion, based on the charge they bear. However, they both get generated from a neutral atom.

The cations consist of more positively charged protons than that of negative electrons. And due to this extra positivity, they have a positive charge. In contrast, the anions are negatively charged as they possess more electrons than protons.

Most of the time, the metals are eager to donate the valence electrons, so as to stabilize their octet. Thus, they are considered electropositive. And have a tendency to form a cation.

Oppositely, the non-metals are electronegative. And thus, they accept the electrons to fulfil their octet. Therefore, they tend to make anion.

In this context, we will learn the primary differences between the cation and anion in detail. 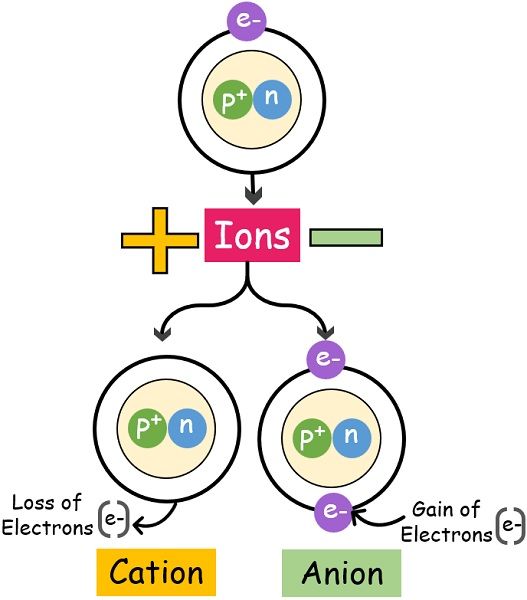 
What are Ions? And how are they formed?

We can define ions as “A charged particles due to an unequal number of protons and electrons.

Our earth comprises several different elements exiting in various forms. However, these elements aren’t stable much in their atomic state. The atoms are neutral bodies with no charges. In order to stabilize themselves and match the stability of noble elements, they transform into an ionic state.

The atom either gives out or takes in the electron to become an ion. Moreover, the negative and positive charges generated have attraction between them. This leads to the formation of compounds with ionic bonds. 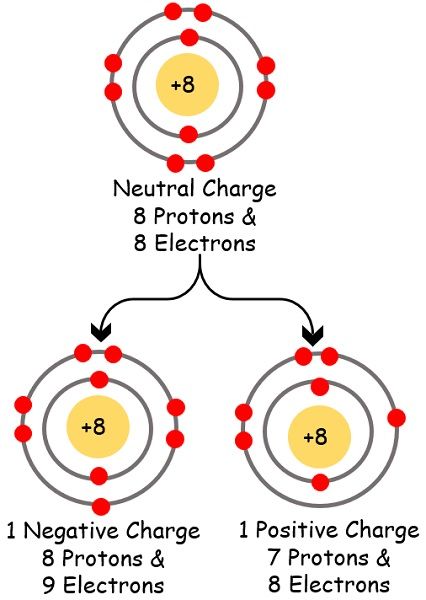 The ions with permanent positive charges are cations. They have more positive protons than that of negative electrons. Thus the overall charge of the atom becomes positive. We refer to this as a cationic atom.

Every atom in this universe wants to stabilize. In order to do so, the electropositive atoms donate their valence electrons. In this way, they balance and match E.C. of the nearest noble gas.

The atom removes the electrons with a lower affinity. Due to this removal of electrons number of electrons reduces thereby decreasing the negative charge. In contrast, the number of protons rises which elevates the positive charge of the atom.

As soon as this happens, the neutral atom transforms into a cation.

An electropositive atom will search for a receiver that is devoid of electrons and will donate its electrons to it. Generally, this character is present in metals. They tend to give electrons and gain a positive charge.

The negative electrode attracts the cations towards itself as the electricity passes during the electrolysis reaction.

We will learn the formation of the cation with the help of an example.

Let’s take the example of sodium having the electronic configuration as:

In order to stabilize its octet, the sodium atom gives away the 1 electron of its valence shell. As the atom has a lower affinity to that electron, it readily detaches and moves to the electronegative one.

As soon as this happens, the sodium remains with 10 electrons and 11 protons. Due to the higher number of positive charges, the sodium will become cation. Now its E.C. will change as:

Another example is magnesium with E.C. as:

It is also an electropositive element. And thus, it donates two of its valence shell electrons to become a cation.

After becoming a cation its E.C. will change as:

Some more examples of Cations

The ions that possess a negative charge are anions. In cases, where the atom is trying to stabilize itself by gaining electrons to complete the octet.

A neutral atom becomes an anion when it attracts one or two electrons to its valence orbit. Due to the gain of extra electrons, the number of negative charges increases. In contrast, the number of protons becomes less thereby lowering the positive charge.

Due to the elevation in the negative charge, the neutral atom transforms to anion.

In order to gain the electrons, there should be a donor who is willing to donate the electrons. If the donor atom will have a lesser affinity towards some electrons, it will pass these electrons to others. And will become stable.

The elements which tend to produce an anion are referred to as electronegative elements. This is because they always have a scope to add electrons in the valence orbit to attain stability. Non-metals being electronegative readily produce anions.

The gained negative charge is depicted with a (-) symbol written over the top right of the element.
For example, Cl–, Fl–, etc.

Note: It is not always necessary that the non-metals form anion only. There are certain exceptions like NH4+. It has no metallic element but still, it is cationic. 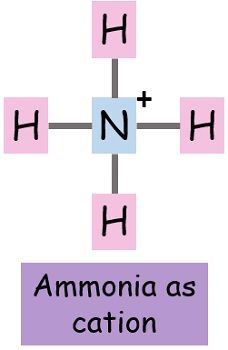 Similarly, carbon which is considered a non-metal can serve both the role of cation and anion as the requirement. 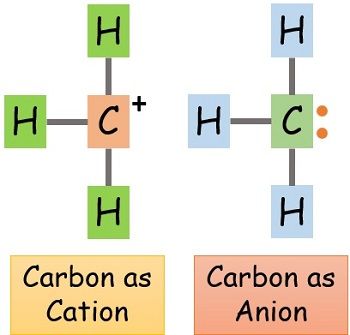 We will understand the formation of the anion with the help of examples.

Let’s take the example of chlorine with Electronic configuration as:

It is a non-metal with an electronegative tendency. Thereby is ready to attract 1 electron to achieve the nearest noble gas configuration. It possesses 7 electrons in its outermost shell, thus it needs three electrons to stabilize its octet.

As soon as, it attracts the 3 electrons to the valence orbit, it will transform into an anion. This is chloride ion with E.C. as:

Another example can be seen of fluorine. It is also a non-metal with electronic configuration:

Here, also the fluorine requires only one electron to fulfil its valence orbit and gain the E.C. of the nearest noble gas.

Some more examples of Anions

Key Differences Between Cation and Anion

Cation and anion are among the common words of chemistry. But if we go in-depth, there are many other similar terms too, like neutrons, protons, electrons. These are the subatomic particles of an atom, which is the most tin particle and is invisible to the naked eyes. Ions are formed of such atoms or groups of atoms.

As we discussed above that the ion tends to be stable if it has an equal number of protons and electrons, but when it loses or gains the protons or electrons, it gains the positive or negative charge and is said as cations or anions. In this article, we discussed the ions differentiated by the net charge held by them.