Both the gymnosperms and angiosperms are significant groups of kingdom Plantae. But they widely differ in their appearance, growth, characteristics, and reproductive pattern.

The gymnosperms on one hand bear the naked seeds. But the seeds of angiosperms are enclosed within the case or a covering of fruit. Gymnosperms have cones or strobilus as their reproductive organs. Whereas, the flowers are the reproductive entity in angiosperms.

The angiosperms make your surroundings beautiful by growing flowers. They may be unisexual or bisexual. While the gymnosperms are non-flowering plants and are strictly unisexual plants.

The xylem and phloem of gymnosperms lack vessels and companion cells respectively. In contrast, these structures are distinctively present in angiosperms.

The following context will elaborate on key differences between the gymnosperms and angiosperms.

The angiosperms are the most developed plant phylum. More than 25,000 species the angiosperms have been found until now. And they constitute around 80 % of all the known green plants. This vast diversity ranges from small weeds to gigantic trees.

The word Angiosperm has its origin from the Greek words Angio (case/vessel) and Sperma (seed). They are flower-bearing species with unique accessory characteristics. They have complex structural organization and elaborate reproductive mechanisms.

Angiosperms have diversely spread to all environments involving natural and artificial ones. They can readily adapt to severe ecological conditions. Thus they even are present at higher altitudes of the Himalayas.

On the basis of environment, they are of four prominent types:

4. Epiphytes: Also referred to as Air plants. These plants grow on the surface of other plants. And consume the nutrients and moisture from them.
Example: Tiger orchids. 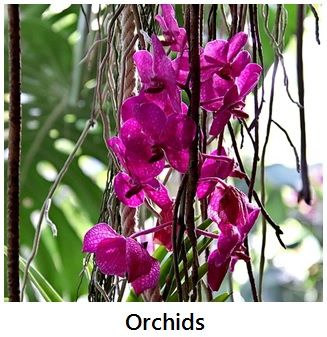 The reproduction in angiosperms takes place by two methods:

They possess the tendency of totipotency. With this ability, a single cell is capable to give rise to the entire plant body.

These reproductive organs can be present in one single flower i.e., bisexual. Or separately in two distinct unisexual flowers.

The gynoecium produces the female gamete called ovules. These ovules lie inside the ovary. On the other side, the pollen grains are the male gametes. And are found enclosed in the pollen sacs of the anther.

At the time of fertilization, the pollen sticks on the stigma and pass-through style to fuse with the ovule. This leads to the formation of a zygote that further transforms into a seed.

The seeds can now produce a new generation of plants. In this way sexual reproduction in angiosperms takes place.

To adapt and survive the various environmental conditions, the plant parts get modified.

We can classify angiosperm into two major groups:

Some features of monocotyledons:

2. Dicotyledons: These plants possess seeds with two cotyledons. They are sub-divided into 342 families.

Some features of dicotyledons:

The term gymnosperm was first introduced by Theophrastus. And a scientist named Robert Brown kept them under a separate group. It is assumed that they aroused around 200 million years ago in the late Paleozoic era. And were very prevalent while the Mesozoic era, especially Triassic and Jurassic periods. It is the smallest group in the plant kingdom including 900 species under 70 genera.

The word Gymnosperms came from Gymnos (naked) and Sperma (seed). As the name implies, they comprise the seeds that have no outer covering i.e., they are naked. This is because ovules are completely exposed pre and post fertilization. The leaves of gymnosperm modify into sporophylls. These sporophylls bear exposed seeds.

The gymnosperms are perennial plants that remain green throughout the year. They stay alive for hundreds of years. They are dominant in equatorial countries that have tropical climates. Like Srilanka, India, Africa, South America, South East Asia, and China.

They grow in almost all kinds of landforms. For instance desserts, forests, alpines, and even snow-covered regions have plenty of them. This is because of their high order adaptability.

For example, the spiny pointed leaves avoid the gathering of ice on their surface.

The reproduction in gymnosperm depicts the alteration of generation. This means they have both the diploid and haploid stages within their life cycle. They have a dominant sporophytic phase that lasts for a longer duration. While the gametophytic stage is for a relatively shorter duration. This is because the gametophytic phases only monitor the formation of gametes in the reproductive organs.

The microsporangium inside the male cone or microsporophyll has male microspores. These microspores perform the mitotic division to generate male gametophytes i.e., pollens.

The pollens germinate to produce a pollen tube as soon as land on the female cone. The pollen tube has two sperms, among them, one degenerates. And the other one gets fertilized with a female gamete to produce a zygote. Zygote turns into an embryo which further develops into naked seeds.

We can classify gymnosperm into two subgroups:

Key Differences Between Angiosperms and Gymnosperms

We all know that life on earth and the successful survival of many organisms depend on plants.  This is because we all living entities rely on them for our basic needs. Thus, it becomes more important to get a thorough knowledge about them. Angiosperms and gymnosperms being the groups of the plant kingdoms are important as they occupy more than 80 per cent of the whole kingdom.

But in terms of vegetation, the angiosperms dominates the earth surface specifically terrestrial habitat than any other group. It doesn’t make gymnosperms less significant. They are important in the biological cycle in an equal manner.