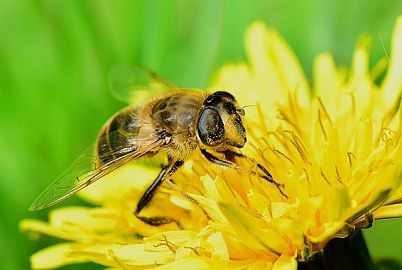 Continuation of life would not have been possible without the presence of plants, as directly or indirectly every organism depends on them. Like the various other organisms which reproduce sexually, the same way flowering plants also do. To forward their characters to other generation and to increase their population size, the plants mainly reproduces in two ways- Pollination and Fertilization.

In this process, flowering plants reproduce by combining egg cells and sperm cells, to form a zygote. This zygote matures into the seeds and grows the next generation. Female egg cells are present in the ovary while male sperm is present in the pollen grains.

In this article, we will be going through the important points which distinguish these two processes along with some more additional information on them.

Pollination is the germination of pollen on the stigma. It is the process of transferring of pollens from the male organ to the female organ of the same or different flower.

The male organ, anther produces the pollen grains containing the male genetic material. Anthers are located at the tip of a stalk known as a stamen.

Stigma is the organ containing the female part, which receives the pollen grains. This is present at the tip of the female organ called as pistil. This will help in sending the sperm cell from the stigma to the ovary which contains the eggs or ovules.

An example of this kind is maize plant, which has staminate and pistillate flowers on the same plant. Such kind of species is called as monoecious. 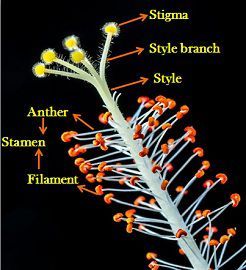 Although the remaining 4% of species produces, staminate and pistillate flowers on separate plants, so these are considered to be dioecious (two houses). Pollination can be of two types: Self-pollination and Cross-pollination.

Self-pollination – The stigma (female part ) receives the pollen from the flower of the same plant. It is commonly seen in Arabidopsis thaliana, Capsella rubella, Bulbophyllum bicoloratum. This is also of two types: autogamy and geitonogamy.

Cross pollination – The stigma receives the pollen from the another plant of same species. This method is commonly used in increasing the variety of the plants, especially vegetables, fruits and flowering plants.

Transfer of pollens from the anther to the stigma by various agents such as insects, butterflies, moths, etc. Other agents are winds, birds, and animals. The process of pollination was discovered by Christian Sprengel in the 18th century.

In the process of fertilization, there is a union of sperm and egg; it is the mechanism after pollination. Each sperm and egg contain half of their hereditary material, which further unite to develop a new plant.

When the pollen grain come in contact with the stigma, a tiny tube is generated along with the sperm. This tube gets fit into another pipe like structure called as the style of the female pistil.

This tube further expands from the style to the opening of the ovary, where the sperms get collected. When these sperm and egg get fuse completely, the egg fertilizes and develop into a plant seed (zygote). The process of fertilization occurs deep inside the flowering plants.

Double fertilization – This is the very distinct process, pursued by the angiosperm plants. In this process out of two sperms, one sperm fertilizes the egg to form the zygote (syngamy). While the other sperm combines with the secondary nucleus (triple fusion) to form a triploid nucleus (3n). This is also called as primary endosperm nucleus.

Hence the fusion of the two male gametes with different nuclei of the embryo sac is called as double fertilization. The fertilized egg fuse to become the zygote, which develops into an embryo.

Key Differences Between Pollination and Fertilization

Given below are the substantial key differences between the two important process of reproduction:

So we can say that flowering plants reproduce through two ways – pollination and fertilization. The former one is followed by few plants, while the latter is the very common procedure and thus followed by almost every plant, in fact, every living organism present on this earth.

Pollination is the simple process of transferring the pollens to the stigma of plants, though this procedure is of different types. In general, fertilization involves the joining of male gametes (sperms) with that of the female gamete (egg), which results in the formation of zygote. It is the common process which is followed by not only plants but also by animals and other living beings.