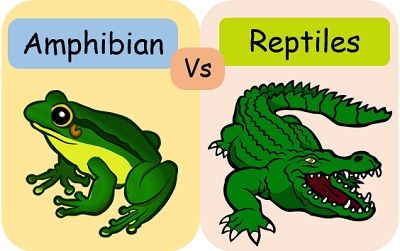 Both the amphibians and reptiles belong to the phylum chordate, thereby having well defined vertebral columns. But still, they greatly differ in their living habits, structure, reproduction cycle and even habitat.

The class amphibians comprise the animals like toads, frogs, and salamanders. They can survive easily on land and water as they have optional gills or porous skin to breathe along with lungs. Whereas the class Reptilia include snakes, lizards, and turtles. They are strictly restricted to the land because they only comprise lungs.

The skin of an amphibian is soft, delicate, moist, thin, semi-permeable and porous. In contrast, the skin of the reptiles is hard, scaly, dry, thick, and with no pores.

Due to the porous skin of amphibians, they are extremely susceptible to environmental toxins, especially in water. Whereas because of the thick, hard and impermeable skin layer of the reptiles, they remain protected from the pollutants and toxins of the environment.

Here, we will discuss the major differences between amphibians and reptiles along with a comparison chart, characteristics and examples.

There are around 3000 different species of amphibians existing on the planet. They are unique due to their dual life both as aquatic and terrestrial creatures.
They are cold-blooded vertebrates that are present either on land or in freshwaters.

There are no marine forms of amphibians. 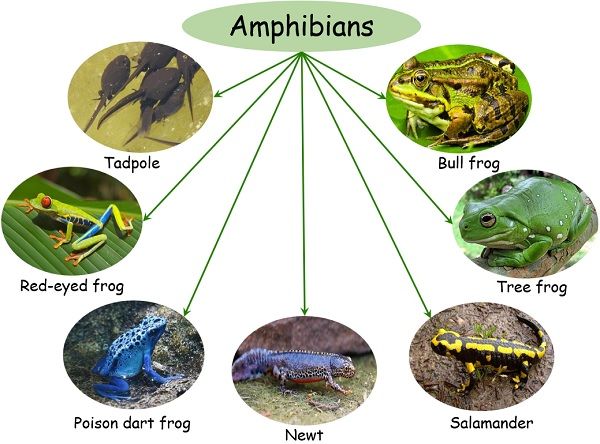 Lifecycle of an Amphibian

Almost all of them have two distinct phases of their life cycle. The amphibian must spend one phase of its lifecycle in water.
The first phase is the larval phase, where they are present in fish-like aquatic creatures. In the second phase, it acquires maturity and becomes an adult. As soon as it transforms into an adult, it moves to its terrestrial habitat. Later, they again come back to the water at the time of breeding.
They lay the eggs and sperm in the water and get fertilised. Further, the fertilised egg gives rise to a tadpole larva.

There are three prominent types of the amphibians:

The amphibians are the ectothermic organisms which they rely on external sources to regulate their body temperature.

General characteristics of the Amphibians

The amphibians are capable of living efficiently on both land and water. In order to attain this unique ability, they have undergone several adaptations that make this dual survival process easy. 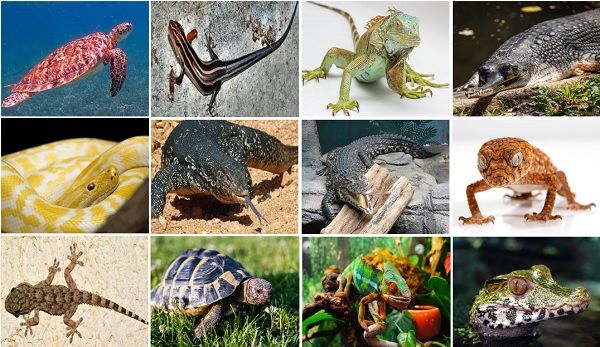 Examples of some common Reptiles

Generally, most of them reproduce sexually, but some can even reproduce asexually. The fertilisation of the egg occurs internally. They lay eggs and thereby are oviparous.
All the activities related to reproduction take place inside the cloaca.

Key Differences Between Amphibians and Reptiles