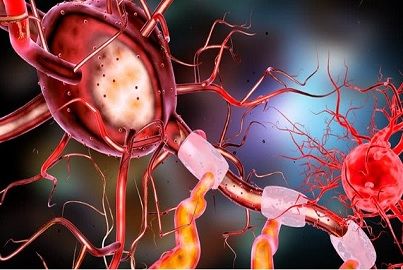 When you rub your palms, do exercises, hit a ball, there is the involvement of afferent and efferent neurons that are responding to the stimulus, and so you are taking actions accordingly.

Interneurons are the third kind of neurons that act as the mediator between the two neurons, though being the part of the central nervous system; it creates a bridge between the afferent and efferent neurons and work coordinately to send the response against any stimulus.

Both the types of neurons are the part of the peripheral nervous system and consists of the dendrites, dendrons and the cell body; also these neurons play a vital role in responding to the sensory stimulus and transmits signals between organs and brain or spinal cord.

The working of this nervous system is very simple like that of computer, it takes input and gives output, so input is any action on which our system provides reaction in the form of output.

Let’s take an example, that while walking on the road, your eyes saw that car might hit you, and so you jump or make the side of that way immediately. This was done because your eyes quickly send the signal to the brains that there can be something wrong and so your brain instantly send a message to the muscles of your leg to move out of the way.

Another example is, if you put your hand on top of the fire (burning candle or any flame), you will immediately remove it, this was again the action took by your brain on your senses.

Our body has various types of neurons, and they keep on working continuously, so the neurons that receive signals from the sensory organs (like skin, ears, tongue, eyes and nose) and then further transfer it to the central nervous system are the afferent neurons. The other neurons that work in sending the signals or messages from the central nervous system to the organs or limbs are the efferent neurons.

In this context, we will be going to discuss the about these two types of neurons (afferent and efferent), their ground of differentiation with a brief description.

Afferent neurons, also known as sensory neurons. These neurons play a role in sensing the stimulus, and within the fraction of seconds, it sends information or signals to the central nervous system about the stimulus.

Sensory inputs include any smell, taste, feelings or emotions, which is carried from the receptor point to the spinal cord and then to the brain.

Efferent neurons, also known as motor neurons. These types of neurons play a role in sending signals or information from the central nervous system to trigger the action.

It happens sequentially like after the sensory inputs are sent to the brain, it further conveys signals to the glands and muscles for the motor response through the efferent neurons.

The following are the critical points to get the differences between the afferent and the efferent neurons:

Afferent and Efferent are similar sounding words and may create confusion to understand for the layman, as there are very fewer variations between the two terms. But these neurons are essential, in sensing and responding to any actions, like if we open a refrigerator and we found the basket of rotten vegetables, we will quickly remove it.