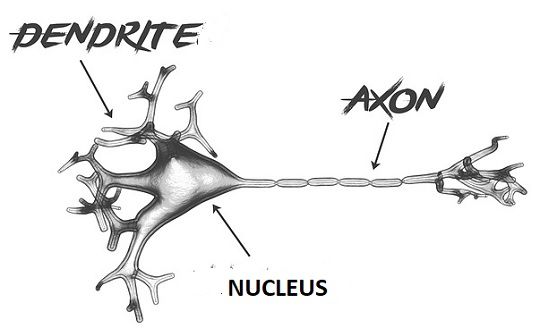 Neurons or nerve cells or neurones are the most basic and essential part of the nervous system and brain. These cells are specialized in sending and receiving the motor commands and sensory inputs, respectively to and from the outer environment. In short, they relay and transforms the electrical signals at every action done by our body.

Above that, nerve cells are responsible for our thought process, so they define or represents our way of thinking, that how we react and take actions in each and every step.

The outgrowth or the extended part of the nerve cell or neuron is called a dendrite. As said above that dendrites are spread or branched like the shape of a tree, and there are many dendrites in one nerve cell. These branches help and support in receiving signals from the other synapses.

The main function of the dendrite is to receive the nerve impulse or signals coming to form other synapses and forward it to the cell body. Dendrite signals or electrochemical messages are in the form of neurotransmitters, sent by other neurons through the special receptor present on the exterior of dendrites.

Dendrites are non-myelinated, due to short-projections and tapering ends. Dendrite was discovered by the ‘Wilhelm His (Mall 1905), he was Swiss anatomist in the year 1889.

The nerve fibre or axon is the critical part of a nerve cell (neuron) that carries signals or information in the form of nerve impulses from the cell body to the outer environment. As said, the nerve cell has only one axon, which long slender projection and connects it with other muscle, gland cells and other neurons.

The length of axons are quite long, and some may be as long as the spinal cord to the toe. In the vertebrates, axons are enclosed within a myelin sheath and result in an increase or quick transmission of impulse; like some large axons transmit impulse at the speed of 90 metres (300 feet) per second. Presence of this myelin (fatty substance) is responsible for white matter of the brain.

The axons have side branches known as axon collaterals, these help in sending the same information to other neurons. These collaterals are extended in the same way as the roots of the tree, which has sub roots that splits as the terminal branches; and each of their tip has synaptic terminal.

The communication point for the neurons are the synapses, that is the junction between the axon terminals and cell bodies or dendrites of the other cell. At this point, the electrical signals coming through axons are converted into chemical signals, with the help of neurotransmitter and then again converted back into electric signals and transfer to other neurons.

Key Differences Between Dendrite and Axon

Following points are essential one to differentiate the two most important part of the nerve cell, which are dendrite and axon:

So, from the above content, we can say that dendrite is the afferent while axon is the efferent components of the nerve impulses and work in sending and receiving electric impulse. As we know dendrites have a shorter length than axons, although axons are myelinated dendrites are not, this enhances the speed of sending the signal to other cells.