Leaves perform crucial functions like photosynthesis, storing food and water etc. But they can vary in their shapes, sizes, colours, arrangements, and patterns based on different environmental conditions. On the basis of these differences, we can broadly classify the leaves as-Simple and Compound.

The simple leaves are the one which bears a single leaf blade or lamina that remains undivided. The lamina consists of margins, but they are not deeply incised upto the midrib.

On the other hand, the compound leaves consist of segmented leaf blades, i.e., the lamina remains divided into small leaf-like projections called leaflets or pinna.

Stipules are present at the base of the simple leaf. In contrast, they are not present near the basal end of each compound leaf.

Every simple leaf comprises of an axillary bud at the axis. In contrast, the compound leaf has no axillary bud.

Here, we will discuss the key differences between the simple and compound leaves with a comparison chart, characteristics and structure.


What are Simple Leaves?

A simple leaf is basically a single unit that consists of no division or segmentation of the leaf blade. It is one flat undivided structure that remains attached directly to the stem via petiole. And since it forms no further sub-division of itself and remains simple in structure, thus we refer to it as a simple leaf.

Generally, the simple leaves are visibly distinct from compound leaves because of their size, arrangement and segmentation. But there are certain exceptions where it becomes difficult to distinguish between simple and compound leaves. Thus, the ideal way to identify whether the leaf is simple or compound is by the presence of an axillary bud. 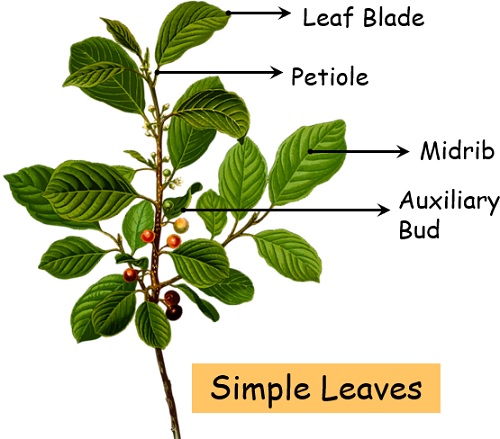 Examples of the plants having Simple Leaves

There are many examples which will explain the pattern the simple leaves have. Some of the common examples are:

Based on the edges of a simple leaf, it can be of three prominent types: 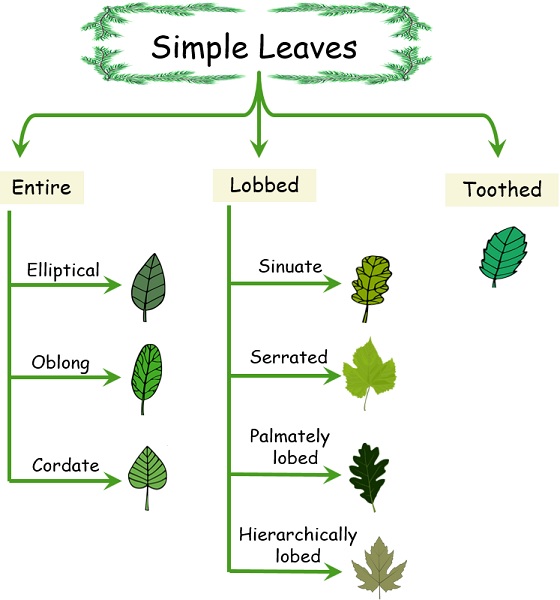 The simple lobed leaf consists of segmentation lobes, but they don’t extend to the midrib.

What are Compound Leaves?

The compound leaves are those where the lamina or the leaf blade remains divided into small leave like structures named leaflets.

The leaflet is also known as the pinna.

Multiple leaflets remain attached to the main stem via a modified midvein called the rachis.

The compound leaves are easy to identify, but the best way of identification is the absence of axillary buds at the end of each leaf. 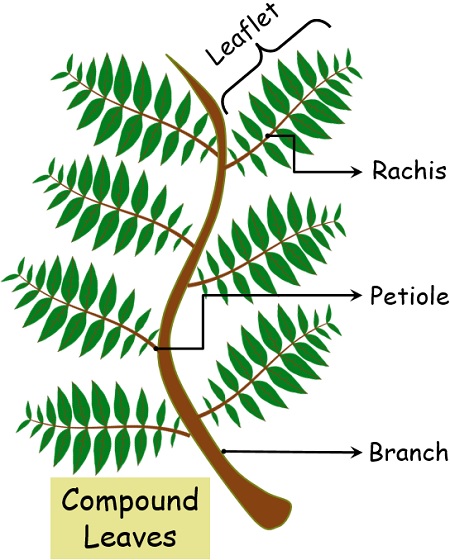 Some advantageous properties of compound leaves are:

Examples of plants having Compound Leaves 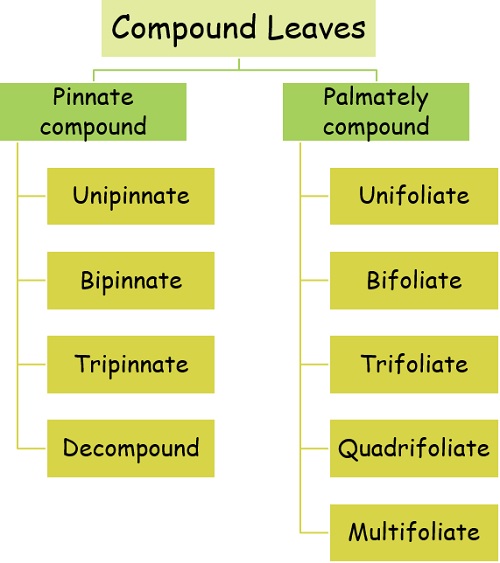 The term ‘pinnation’ refers to the sub-division of a leaf into leaflets. The pinnate leaflet arrangement can be either evenly paired or oddly paired.

In the pinnate leaves, the arrangement of the leaflet is opposite and even are paripinnate leaves. The rachis at the ends (termination point) is sprout with two leaflets. For example, Mahogany, Tamarind, and Candle bush are a few examples.

In pinnate leaves where the leaflets are opposite and oddly arranged are imparipinnate leaves. Here, the rachis at the end sprouts with the single leaflet.
Example: Pecans, Roses, Acacia are some examples.

Based on the pinnation arrangement, pinnately compound leaves are of three types: Unippinate, Bipinnate, and Tripinnate. 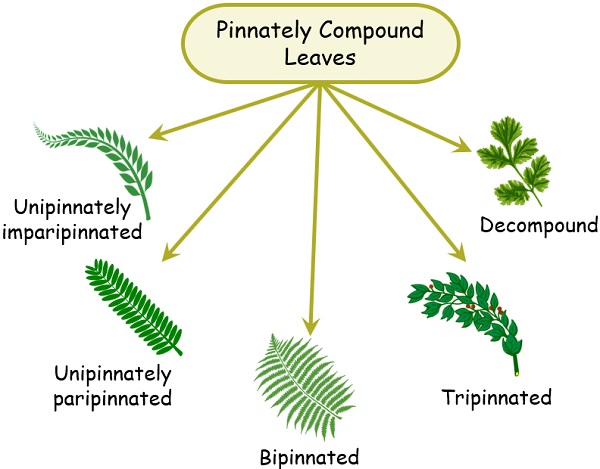 The leaves where leaflets arise from the single point of the petiole are Palmately Compound leaves. Here, the arrangement of the leaflets is similar to the fingers of the palm, thus they got the name “palmate”. 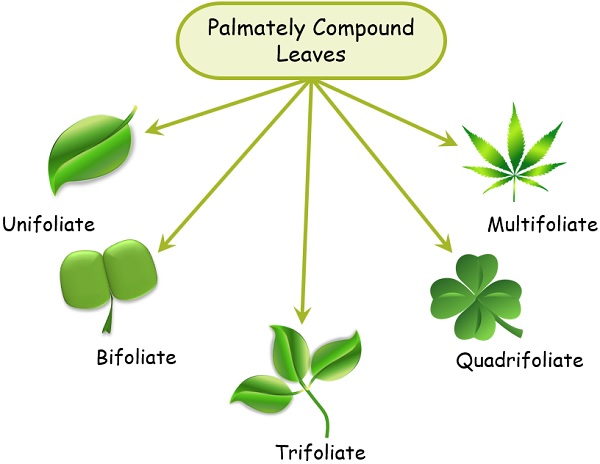 We can easily distinguish between simple and compound based on the structure of leaf blades or lamina. The above context is the overview of the identification of the leaves and how they can be classified by the arrangement of the leaflets. This will help you identify the plant species just by the structure and orientation of its leaf.