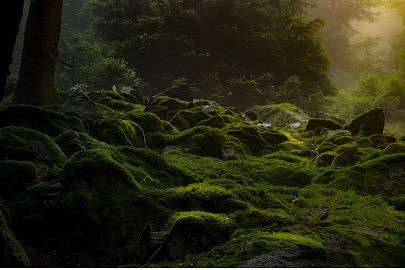 Liverworts and Mosses are the non-vascular and non-flowering plants that are found in wet and terrestrial environments. Though numerous essential differences lie between them. For instance, Liverwort belongs to the division – ‘Marchantiophyta‘ or often term as’Hepaticophyta’, while mosses fall under division – ‘Bryophyta‘.

Secondly, liverworts have thallus or foliose that are green leaf-like arrangement hook-up with the stem, whereas mosses are simple, small and leafy arrangement present around thallus that display spiral or radial symmetry.

Non-vascular plants like hornworts, liverworts and mosses and some algae, are categorized as plants which are very small in size and do not have the functionality like the advanced plants have; As these plants lack the transportation system for the exchange of gases and waters and other material. These plants do not bear fruits, flower or wood. Non-vascular plants reproduce by spores instead of seeds.

Although the non-vascular plants have specific specialized tissue for the transportation of waters and other materials, as lignin is absent in these tissues and so they are not categorized as true vascular tissue like those found in ferns, gymnosperms, angiosperms and lycophytes.

In this article, we will be going to take the points that differ the liverworts from the mosses and also a brief discussion on them.

Unlike the other plants, liverworts differ from the typical plant by having a single layer of the cells. They also vary by not having stomata, which has the use of gaseous exchange for the process of photosynthesis in the advanced plant. 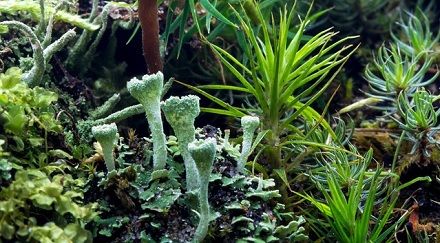 Liverworts can be leafy or thalloid, and the first one is the simple form of the species by the latter one has the complexity as they have multiple thick layers of green tissues known as thallus.

Liverworts are the flattened plants that grow across the upper layer of soil, mountains, rocks and on the other plants. The dominating phase is the gametophyte, while the sporophyte phase occurs for a short duration. 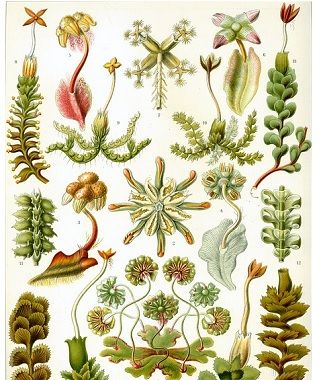 Instead of the roots, liverworts have rhizoids, which are hair-like structure and support the plant in anchorage to the surface, and in absorbing water. So, liverworts have two parts the upperside and upper. First one is for photosynthesis, and so it is green in colour, while the second part consists of the rhizoids.

As discussed above, the liverworts belong to the division ‘Marchantiophyta‘, and makeup around 8000 relatively diverse species all around, out of which majority is of the leafy liverworts species.

Earlier, Liverworts were also categorized under ‘Bryophyta’ with Hornworts and Mosses, but with the in-depth research and gaining knowledge about them, they (liverworts) were classified under different class.

The plant reproduces by using spores, for the fertilization process, the sperm travel through water or wind to the egg of the other plant. The fertilized eggs develop into spores and get dispersed.

Likewise the liverworts, Mosses also have rhizoids and reproduce by spores. Mosses are present in wet environments like alpine, rainforest and wetlands. These can be commonly seen in wet areas and grow their colonies on sidewalks, brick walls, driveways and other human-made structure. Their favourable condition to grow is the wet climate. 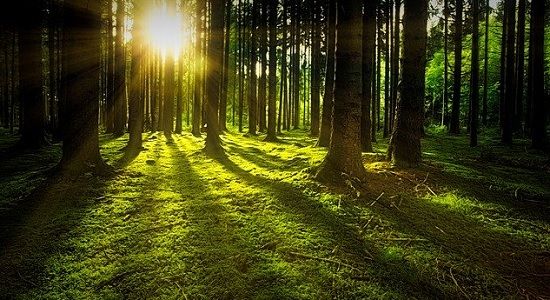 Mosses are categorized under the division of ‘Bryophyta‘ and have sub-division ‘Musci‘. There are approximately 14,500 species of the mosses found all around the world and constitutes around 75% of the total Bryophyta species.

The gametophyte containing sperms cells are covered by the thin layer of water, travel to another gametophyte for fertilization with eggs. The fertilized egg will grow into a sporophyte, which will later develop into spores.

Key Differences Between Liverworts and Mosses

Following are the essential points to differentiate the liverworts and the mosses:

In this article, we came to know about the non-vascular plants which are liverworts and mosses, on which points they differ and how are they similar. We also discuss their structure and their method of reproduction.

Also, such plants are essential to the environment, as they are the habitats of the many insects and invertebrates. They are also the food source for many of them. They also help in retaining and filtering water, and removes CO2 and stabilizes the ground.