Beginning genetic material i.e., the template is different in all three types of PCR– regular, RT PCR and qPCR.

The basic PCR utilizes normal double-stranded DNA as a template. Whereas RT PCR permits only works with RNA as a template. qPCR is the most advanced version that is capable of working with both DNA and RNA as templates.

PCR, RT PCR and qPCR have become a normal part of human life after the covid pandemic outbreak. Thereby it becomes important to have a thorough understanding of these molecular biology techniques.

People certainly get confused between these terminologies and consider them synonymous. This content emphasises key differences between these three techniques.

PCR facilitates the generation of several billion identical copies of DNA. Thus, it can be considered analogous to a “Photocopy machine”.

It enables the scientists to assess, amplify and analyse very short fragments of DNA even from trace amounts of sample. It plays a significant role in modern scientific domains like:

The PCR technique exploits the DNA polymerases enzyme to function. DNA polymerase bears the unique property by which it can synthesize the complementary strand using a template DNA.
The process of amplification occurs in a machine known as ‘Thermocycler’. The thermocycler provides the required range of temperature zones for the reaction.

A variety of ingredients are required for the PCR reaction, each having a specific and significant role. Some of the significant components are-

The PCR has an intricate procedure that is carried out in three essential steps at their distinct temperatures, respectively. These are- 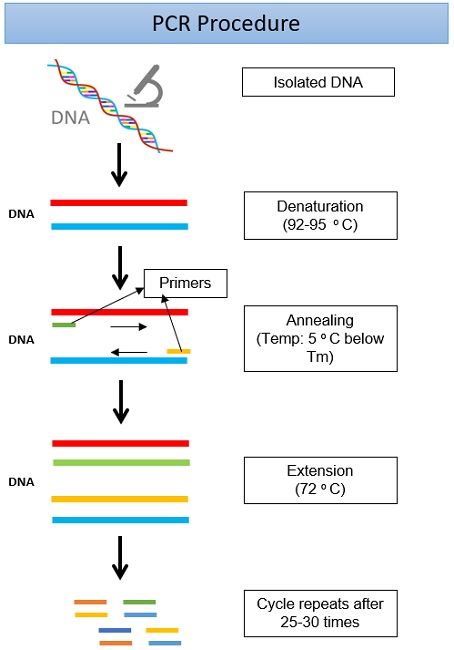 These three steps are repeated in the form of a decided cycle, which are prescheduled in the thermocycler machine. The cycle number of the reaction varies as per the sample used and required product yield.

As soon as the PCR reaction is completed, the results can be visualised with the help of agarose gel electrophoresis. The DNA will be obtained in the form of bands that can be seen under the U.V. transilluminator.

RT PCR or Reverse transcriptase PCR is a modified and modernised version of a basic PCR. The elementary PCR assisted the amplification of only those organisms having DNA as their genetic material. However, RT PCR eliminates this obligation. RNA is used as the beginning template in the case of RT PCR, allowing the amplification as well as detection of RNA also.

The RT PCR technique generally utilised the strength of the reverse transcriptase enzyme to revert RNA into complementary cDNA form. This probability proved to be an ultimate tool for RNA related researches and diagnostics. 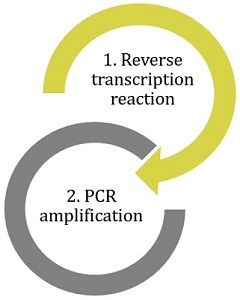 Being single stranded, RNA is highly unstable in nature and therefore is difficult to work with. The supplementary step of the RT reaction helps in subduing this problem.

In the first step, the RNA fragment is reversely transcribed into its complementary cDNA with the help of an enzyme reverse transcriptase. This cDNA now plays the role of template in the subsequent step of PCR amplification.

The major steps involved are:

Note: The quality, quantity and purity of the RNA template are the key benchmarks for performing the RT PCR as it is an exquisitely sensitive technique.

Definition of Real-time or qPCR

This variant of PCR is predominantly used for the quantification of nucleic acid and therefore is known as Quantitative PCR. This is the only PCR that can assert the exact amount of DNA or RNA present in the respective sample.

qPCR is a nuclear-derived method based on fluorescent dyes, radioactive probes and most frequently isotopic labelled markers. The underlying principle behind qPCR is the use of fluorescent dyes and labelled probes that aid the detection of a proportionally increasing amount of amplified product. 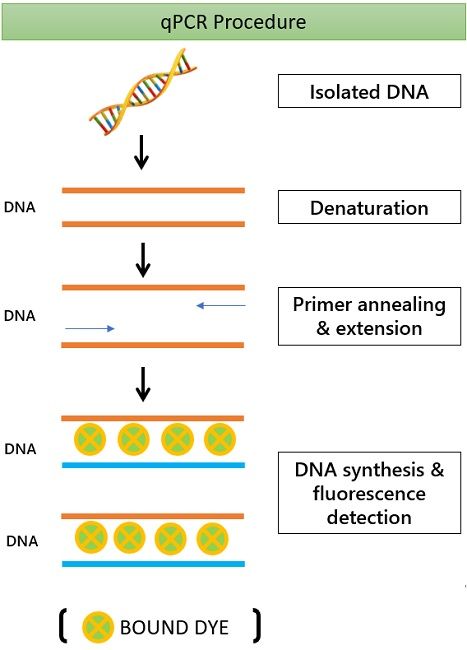 There are two major approaches for qPCR –

There are two vital advantages of this technique –

A sole disadvantage of the qPCR is that only one specific kind of product in a sample can be amplified and detected at a time.

The above content can be summarised based on the following point–

Either PCR, RT PCR or qPCR, these techniques serve as the backbone of the modern and revolutionised biological world. They literally have transformed the passage of conventional research and have made it simpler in many ways.

There are several advantages of RT PCR and qPCR over the traditional PCR method as they permit to work with RNA, helps in the quantification of nucleic material etc. yet the traditional PCR proves to be a reliable tool as it is easier to use, simpler, cheaper and requires less expertise to work on.