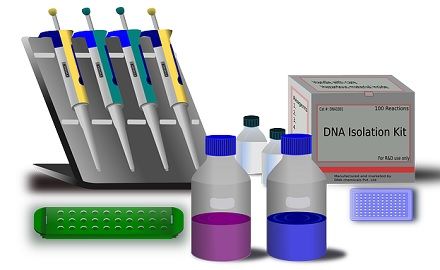 Southern blotting is the first detection technique which is used to identify the specific DNA sequences in the provided tissue or blood sample and is named after the scientist who developed it, ‘Ed Southern in the year 1975.

Northern blotting is the technique used to know the gene expression of the provided sample by identifying the specific RNA or mRNA molecules; it was developed by David Kemp, James Alwine and George Stark in 1977 at Stanford University. Western blotting is a sensitive assay used in the detection of proteins in the given sample, and Stark’s group developed it.

Blotting techniques are a widely used method for the specific identification of desired nucleic acid (DNA and RNA fragments) and proteins from the numerous molecules.

This technique involves immobilization of the sample of molecules of nucleic acid on the support of nylon membranes or nitrocellulose. It is a hybridization technique for the identification of specified genes, proteins or nucleic acid (DNA, mRNA) during multiple stages of gene expression.

The general process that is followed in blotting is in simple four steps, and firstly the sample is homogenized; secondly, separation of target molecules is done by an electrophoresis membrane; thirdly transferring of molecules to nylon or nitrocellulosic membrane and lastly, identification or hybridization of molecules is made.

In this article, we will observe the critical differences that lie between these three techniques, along with their description.

This is the first nucleic acid blotting technique. Ed Southern developed it in 1975. The process is briefly described in the following points:

There is numerous application of the Southern Blotting like it is used in gene analysis, genetic disease, infectious agent, mutation, RFLP, identification of any specific gene, and also in victim identification, DNA fingerprinting, criminal and rapist identification, paternity testing.

Likewise the southern blotting the process is same here, as RNA is subjected to the electrophoresis, and then by blot transfer and hybridization and autoradiography.

The only issue which arises here is that the RNA molecules do not easily bind with the nylon membrane or nitrocellulose papers. So, blot transfer is performed by advanced or modified nylon membranes or nitrocellulose papers and are used widely. In autoradiography, the blot-transferred RNA molecules are easy to detect, after they hybridize with a labelled oligonucleotide or DNA probe.

Although, this technique theoretically seems to be good, for determining the number of genes in the given DNA sequence. Still, there are few drawbacks like the presence of introns and exons in the sequence; secondly, genes may give origin to one or more transcripts.

This technique is widely used in disease diagnosis and gene expression.

Western Blotting technique is used for the identification of the amino acid sequence in the mixture of proteins. It is also known as immunoblotting or protein blotting. Here proteins are separated into SDS-PAGE (Sodium dodecyl sulphate polyacrylamide gel electrophoresis), as per their molecular weight and it follows the principle of immunochromatography.

Then proteins are transferred to nitrocellulose paper and are detected by using primary and secondary antibodies and substrate. George Stark’s group developed this technique in 1979 at Stanford University.

It is widely used in HIV test to check anti-HIV antibody in the sample of human serum; also used in Hepatitis B, HSV 2 infections, Lyme disease, Creutzfeldt-Jakob disease test, and to test the amount of protein present in any sample.

Upcoming points will exhibit the essential differences between the three types of techniques used in the laboratory for detection of DNA, RNA and protein and gene expression.

From this article, we can conclude that these techniques were developed to identify different molecules present in blood like DNA, RNA and protein, they can also be used for identifying particular gene expression. Hence, they all are equally important and have vital aspects from a biology point of view.