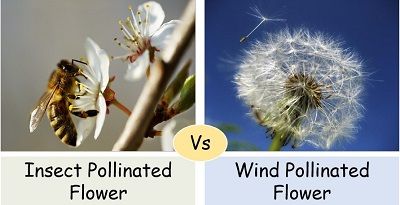 The insect-pollinated and wind pollinated flowers highly vary in their structural appearance.

The flowers are large-sized for insect pollination with vibrant bright colour petals. These flowers possess many nectar glands that continuously release the nectar. For this reason, they have a very sweet and fragrant smell. These all factors make the flower attractive for the insect to come and sit over the flower.

On the other hand, there is no need to lure anybody for wind pollination. Thus, the flowers are tiny, inconspicuous with unattractive dull dark coloured petals. They lack nectar glands and thus are devoid of the sweet smell of nectar.

The quantity of pollens produced by both the flowers also varies. Entomophilous or insect-pollinated flowers have much probability of reaching another flower for fertilization. Thus, these plants produce a lesser amount of pollens comparatively.

In contrast, the pollens are less likely to reach the right spot as the Wind drifts them to somewhere else. Thus, in order to increase the chances of fertilization wind-pollinated flowers generate a huge amount of pollens for hit and try the method.

Here, we will discuss the major differences between these two types of flowers with the help of a comparison chart, characteristics and examples.


What is Pollination? And why is it necessary?

Pollination is the process of transfer of pollen grain from stamen to the stigma of the same or different flower. There are some agents that facilitate the process of pollination, they are pollinators.

Almost all the plants rely on pollination for the transfer of the male gamete to the female stigma which can further lead to their fertilization.

For pollination to occur rightly, factors like the floral and inflorescence architecture are greatly important. Similarly, the plant height, floral position, location of the reproductive organs etc. are some prominent characteristics that influence pollen dispersal and capture.

What do you mean by Insect Pollinated Flower?

Insects can be the most irritating creature on the planet if they want to be! They can create a nuisance of all kinds that persuade you to kill them so that you can enjoy your buzz-free life.

But no organism on the earth is worthless; it will have its duty assigned by mother nature. Similarly, the insects are allotted the major work of Pollination.

Almost 75% of the plant species present on the globe rely entirely upon the insect for their gametes to pollinate. This makes them utterly crucial as we all depend on plants for our survival.

The insect-pollinated flowers are simply those flowers where the insects are responsible for carrying the male pollen from another to the stigma of the same or different flowers. 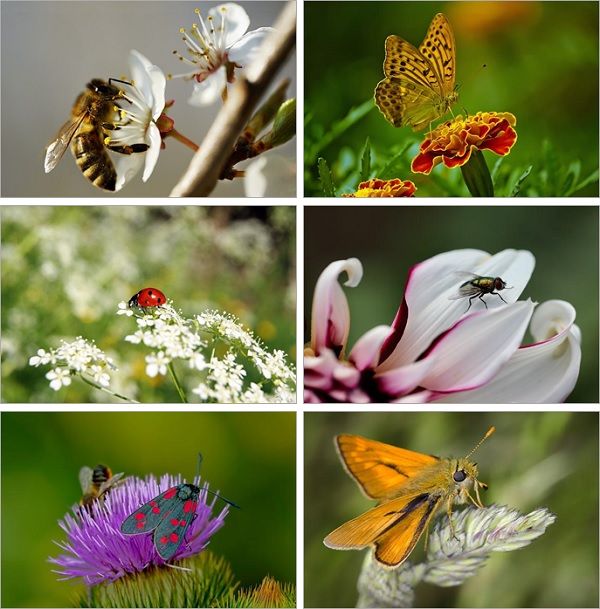 We refer to insect pollination as entomophily. Therefore, these flowers are often called entomophilous flowers.

How does the process of insect pollination occur?

The insect needs to come close to the pollens so that they can get stuck on its body surface. And when it moves from one flower to the next in search of more nectar, it will carry the pollens along.

Plants tend to attract insects through their beautiful flowers. The bright colours and the sweet fragrance of the nectar appeal to them towards it.

As soon as it reaches another flower, the pollen brush over the stigma. And if the flower is of the same kind, the further process of fertilization takes place.

What do you mean by Wind Pollinated Flower?

Most of the biological research focuses largely on insect-pollinated flowers. But we can’t ignore the fact that the Wind facilitates pollination in those areas where the pollinators are scarce. It is the type of pollination where the plants use Wind as the pollinating agent that carries the pollens to the desired location.

Around 10 % of the plant species depend upon the wind for the transfer of the pollen grains from one flower to another.

As the Wind is present always and everywhere, thus there is no need for the plant to do any specific structural modification to lure the pollinator.

Even though this method of wind pollination seems simple and fascinating but is quietly uncertain. The probability that the pollen will land at the right spot is low. You can understand it as a “hit and try method”. The direction of the wind might take the pollens away from the destination. For this reason, they are substantially less efficient.

We refer to the pollination by the wind as anemophily. Thus the flowers getting pollinated by Wind are anemophilous flowers. 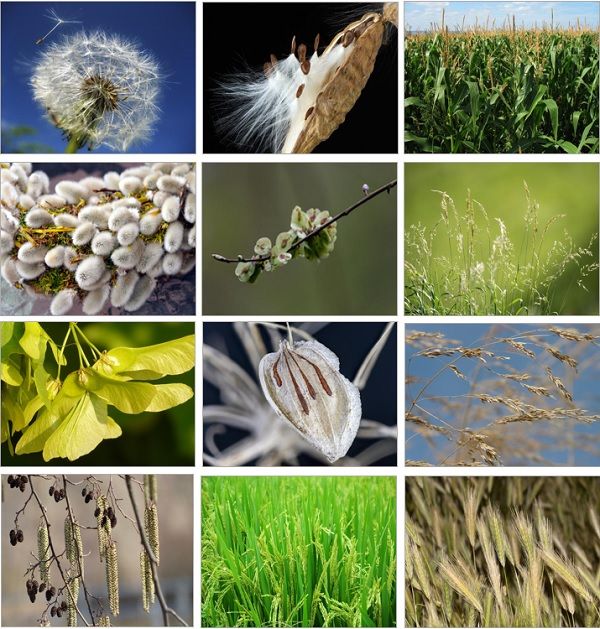 How does the pollination by Wind occurs?

The anther of these flowers hangs on the outer sides. As soon as the wind blows and hits the anther, releasing several lightweight tiny pollens into the wind. They move along in the direction of the wind and reach the stigma of another flower of the same kind.

Pollination is a very important topic in botany which tells us how the biotic and abiotic factors rely on each other. Both the insect and wind-pollinated flowers have their own significant characteristics which are briefly described in the above context.