IgM is the first antibody to be produced in response to any antigen (foreign particle) invasion, while IgG is most abundantly found antibody in the human body. IgM is the largest immunoglobulin among all, with pentamer units and ten antigens binding site. IgG are responsible for humoral immunity and is a monomer unit which is lighter and smaller, with two antigen binding site. Due to the smaller size of this antibody, it is able to travel through the bloodstream.

Our Immune system is one of the most effective defense mechanism in the body. It can recognize foreign particle and protect our body by eliminating these foreign particles, which is also termed as ‘Antigens‘ against which antibody are been produced by the body.

Antigens can be a protein or a carbohydrate that evoke immune response resulting in the development of ‘Antibodies‘ also called as Immunoglobulins. These immunoglobulins are proteins produced by B- lymphocyte namely IgG, IgA, IgM, IgD, and IgE. In this article, we will discuss the difference between two immunoglobulin namely IgM and IgG.

All Immunoglobulins (Ig) or antibodies are proteins developed by B-lymphocytes. IgM is the largest antibody, found in blood and lymph and developed by plasma cells. 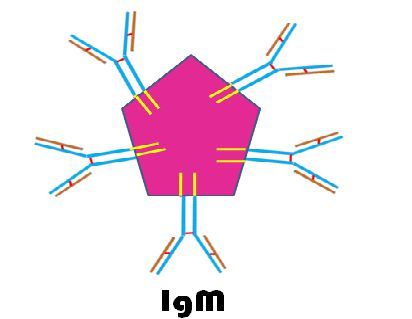 It’s a pentamer composed 5 Y-shaped units joint together by polypeptide chain. IgM also has ten antigen binding site with the heavy chain as mu ( μ) and light chain of kappa ( κ) and lambda (λ ). However, only five are functional antigen binding sites. As the size of IgM is larger as compared to other immunoglobulins, hence their presence is only 5- 10% of total blood serum.

The effect of IgM is temporary and they disappear, after 2-3 weeks of their production. High level of IgM may give rise to parasitic infections, kidney damage, rheumatoid arthritis, hepatitis, mononucleosis. Even if the level of IgM in the newborn is high it means the child had already caught an infection in the mother’s womb before the birth.

Low level of IgM results in few types of leukemia, myeloma, and some inherited diseases. So we can say that the presence of IgM marks certain kind of infection in the body.

The presence of IgG is 75%-80% in total blood serum. It is most abundantly found in the body, produced by white blood cells. IgG is the smallest antibody among all consisting of only single Y-shaped monomer unit. It also has two antigen binding site and heavy chain of gamma (γ ) as the well light chain of kappa (κ ) and lambda ( λ). 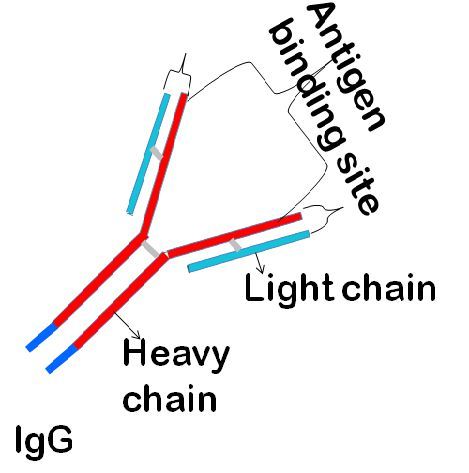 IgG is the long-term response to any disease or infection. It is of four types IgG1, IgG2, IgG3, IgG4. Due to small size, it can travel through the blood and most importantly IgG is the only antibody that can cross the placenta and transfers mother’s immunity to the developing embryo. IgG is produced at the later stage of infection, but their effect is for a long time and helps in complete eradication of infections or diseases.

Thus IgG plays an important role in producing the secondary immune response against any antigen, promoting opsonization, phagocytosis and in fighting with viruses and bacteria.

High level of IgG in the body means a long-term infection like HIV, multiple sclerosis, multiple myeloma. Low level of IgG results in kidney damage and few types of infections.

Key Differences Between IgM and IgG

Following are the key differences between IgM and IgG:

Immunoglobulin (Ig) or Antibodies are the proteins produced in B-lymphocytes, to fight against any infections, there is five kind of antibodies, and all plays a vital role in fighting diseases and are very specific to these antigens, these antibodies are of different size, having light and heavy chains.

IgM is the first antibody to fight against, and attack of viruses or bacteria whereas IgG reacts later but help in the permanent eradication of antigens by enhancing phagocytosis or opsonization.