Our body comes in contact with millions of disease-causing pathogens throughout the day. But still, we are not ill or infected all the time. The credit for this goes to our immune mechanism i.e., our immunity. We have two sorts of immunity-Innate and Acquired.

Both of them are very essential for the healthy survival and well-being of an individual. But they widely differ in their appearance and working mechanism. The most significant difference between them is their time of occurrence.

Innate immunity on one hand is present in our bodies from the time of birth itself. In contrast, a person acquires adaptive immunity by gradual exposure to pathogens during their life span.

Innate immunity is a first-line defence mechanism of our body. Thus, its primary motive is to immediately cease the proliferation of the pathogen inside the body. It, therefore, generates a broad spectrum, rapid and non-specific response.

In contrast, the purpose of adaptive immunity is to recognize the foreign pathogen and produce an ultimate solution to get rid of it. For this reason, it takes a long time to generate any response. The response generated is delayed but very specific.

Innate immunity identifies the foreign antigen but is unable to memorize it and thus, the response produced doesn’t last for long. On the other side, the response of adaptive immunity remains long-term due to its ability to remember the pathogen. Thus, on the second encounter of the same antigen, the response sustains due to the production of memory cells.

In this section, we aim to elucidate the key differences between innate and acquired immunity along with a comparison chart. 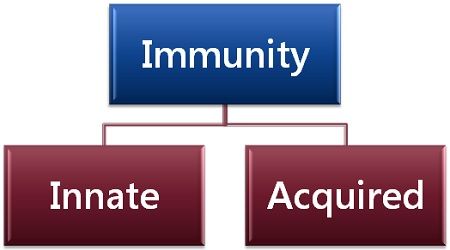 What is Innate Immunity?

The human body comes in contact with millions of potentially hazardous, infection-causing agents all the time. Our body doesn’t have enough time to wait and analyze the situation and then react. In this time lag, the pathogen might become more powerful and might increase its number in an exponential manner.

To avoid such a scenario, the body has instant machinery that responds as soon as the pathogen encounters. We refer to this machinery as innate immunity.

This immunity is phylogenetically older and evolutionary as its elements are successfully discovered in almost all multicellular entities including some invertebrates.

“It is the type of immunity that serves as a first-line defence mechanism against any foreign antigen”.

The prime motive of this immune mechanism is to prevent the infection at a very early stage. Thereby ceasing the pathogen from causing any further damage to the body.

Innate immunity prevents the entry of pathogens into our bodies. As the pathogen enters inside, this immunity tries to stop its further growth. And also prevents the establishment of the infection. It also works efficiently to clean out the cellular debris of both the host and pathogen.

The response is non-specific and is produced by pattern recognition molecules (PMRs). These PRMs express a broad spectrum response against foreign invasion. It tries to eradicate the foreign antigen. Thereby hindering the establishment of infection until specific adaptive immunity comes into play.

Relation between Innate and Adaptive Immunity 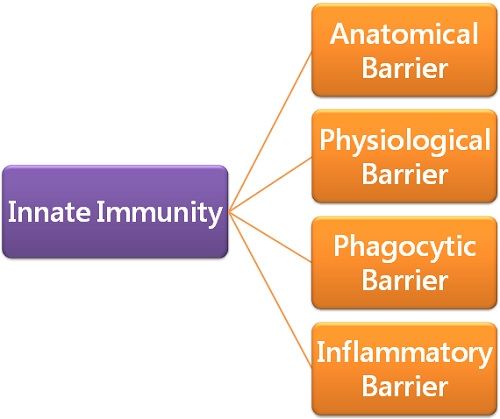 These are the structural features of the body that make defensive lining between the internal body and the external environment. These features reduce the chances of entry of pathogens inside the body. Thereby, decreasing the probability of disease or infection.

Our body has many phagocytic cells like macrophages, neutrophils and monocytes. These cells are highly reliable innate defence barriers. They are capable enough of digesting unwanted exogenous and endogenous particles. This process of elimination is phagocytosis.

The process of phagocytosis required the following steps: 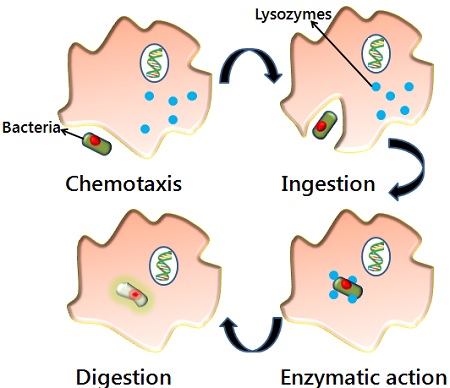 Inflammation is a non-specific localized defence response. It occurs when our immune system fights against invading organisms. Inflammation occurs over abrasions, pathogenic attacks, chemical imbalances, or metabolic disturbances in cells. It manifests the symptoms like redness, itching, pain, swelling, and heat at the site of invasion or injury.

What is Adaptive Immunity?

Sometimes a foreign antigen is successful in bypassing innate immunity. In such a case, there is a need for a specialized targeting mechanism that is capable of shooting the exact size bullet to kill the foreign entity. This mechanism is the Adaptive immunity of our body.

Adaptive immunity is evolved around 500 million years ago in jawed fishes. This immunity is not found in lower organisms and is only restricted to vertebrates.

In contrast to innate immunity, the adaptive one is not present in our bodies by the time of birth. Instead, we acquire it gradually during the life span by encountering different antigens. This encounter produces specified receptors that deliver the required response.

“It is the immunity that develops over time as a result of exposure to numerous types of antigens.”

Some cells possess specific markers to identify the self and non-self antigens. And to notify immune machinery not to attack the self ones. While telling it to produce a response against those who are recognized as non-self. This utterly unique property is referred to as self-tolerance. This prevents our immune system to harm our own molecules. This self-tolerance can be a failure under certain circumstances. Such a situation leads to autoimmune diseases.

The acquired immunity fabricates an antigen-driven response. The immune machinery analyzes the antigen thoroughly and discriminates among the other antigens. Further, it produces a response against that respective antigen. This ability to distinguish the antigens makes acquired immunity more specialized.

The immune system has a great potential to make massive diversity of antibodies. This lets it recognize millions of unique antigenic structures.

It is an essential characteristic ability of this immunity to memorize the antigen’s first exposure. It allows us to generate a quick and more powerful response to the repeated encounter. 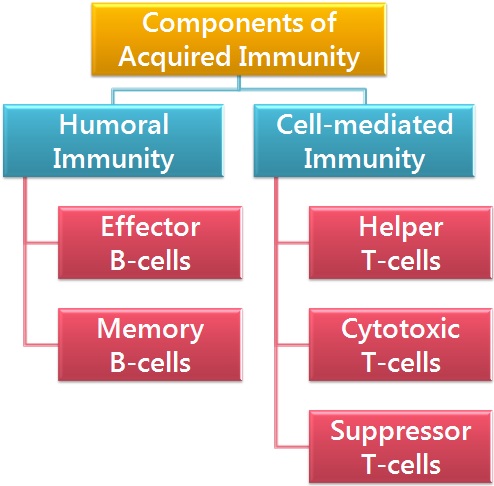 There are two prominent types of acquired immunity:

This is the immunity that an individual directly develops as a response to antigenic stimulus. Here, the body’s own cells generate the antibodies either due to infection or vaccination.

It is a time taking process that slowly forms the antibodies concerning a particular antigen. But it is a durable and long-lasting immunity.

Passive immunity refers to the intake of already made antibodies inside our body. It provides an instantaneous aid to curb the infection. Antibodies are directly injected into an individual to get a faster immune response. Although it is a trouble-free method it might cause certain issues too. 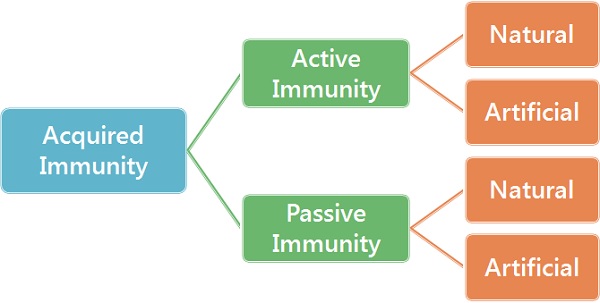 Immunity serves as a defence barrier that wards off the damage from diseases. It protects us from a certain number of deaths by getting ill. This immunity is of two main types- Innate and adaptive. Innate is present from our birth. It produces a non-specific and faster response. Whereas the adaptive one is attained through exposure to the antigens. It generates a specific but slow response.