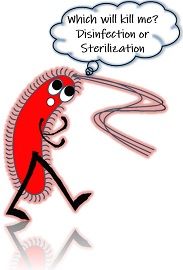 Following the covid eruption, you may have come across the terms disinfection, sterilization, and even sanitisation at regular intervals. All of these phrases refer to antimicrobial procedures aimed at eradicating pathogenic microorganisms and other infectious agents.

Disinfection is a common and simple method of decontamination that we employ on a daily base. On the other hand, sterilization is predominantly linked with medical, industrial, and scientific areas and is not performed very frequently for household purposes.

Sterilization can be thought of as the most advanced approach for ensuring the elimination of all pathogenic living forms. In contrast, disinfection just decreases the germ count to a non-threatening level rather than entirely removing them.

However, you must first understand the significant differences between these procedures before deciding which kind of asepsis is best for your situation. In the following context, we will try to point out the differences between sterilization and disinfection, including a quick description, types, and instances.


Why is disinfection or sterilization necessary?

We are surrounded by a plethora of microflorae. For instance, a gram of dirt has approximately 40 million bacteria, and a human mouth carries more bacteria than the whole world population. It is evident from this that microorganisms are an inseparable and unavoidable part of our lives.

The majority of microorganisms live in peace; however, some are hazardous to human health. For the sake of a healthy lifestyle, these hazardous pathogenic florae must be eradicated. Disinfection and sterilization are procedures used to clean the air, water, and surfaces in order to remove them.

“The antimicrobial process that targets to reduce the quantity of undesirable contaminating microbial fauna to a non-threatening level except for bacterial and vegetative spores is known as Disinfection.”

Disinfectants: Chemical substances which are used for disinfection are known as Disinfectants.

There are several other disinfectants like aldehyde derivatives, quaternary ammonia compounds, peracetic acids and so on. These all have their own advantages and disadvantages and are used at different places as per the condition.

“The antimicrobial technique used to eliminate any type of contamination, such as bacterial, fungal, and virus cells, as well as bacterial and vegetative spores, is called sterilization.”

In comparison to disinfection, sterilization is a highly technological approach for decontamination and cleansing. It necessitates specialised knowledge as well as specified equipment. It is a costly way of decontamination but is the most effective and promising way of ensuring environmental safety.

The sterilization process can be classed into five categories: 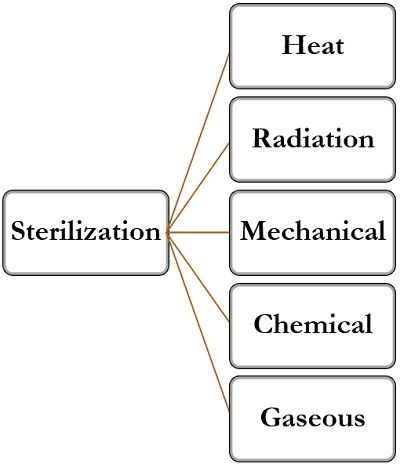 Heating is one of the most ancient, simple and reliable methods of sterilization. It is highly preferred due to the following advantages:

Heating basically kills the microorganism by either coagulating or oxidising the protein components of a cell. This process of protein inactivation is called denaturation. A substance when is exposed to heat for a longer duration, the cellular components shrink, and the microbial cell eventually dies.

Heat sterilization can be employed in two ways: 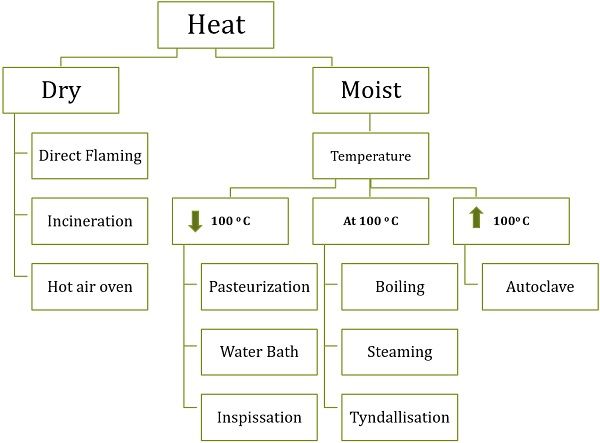 Moist Heat Sterilization
Here the substance to be sterilised is subjected to hot water vapours or steam. This method generally coagulates the protein molecules leading to the deactivation of normal functioning inside the cell.

Moist heat sterilization can be achieved by the following techniques:

Autoclaving:  This works with the principle of steam under pressure (121 oC; 15 lbs). The instrument used here is called an autoclave, which is a large vessel made of steel, wood or glass.
The autoclave is filled with water upto a certain level. As soon as this water boils, the steam is generated. This steam creates pressure in the chamber. The heat as well the pressure both kill the microbes effectively. 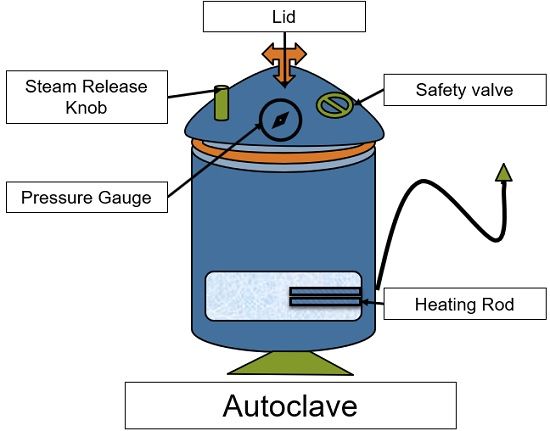 For thermally stable material, dry heat sterilization is preferred. During moist heat sterilization, some metallic equipment is at high risk of corroding due to moisture. Dry heat is the best option in these situations. Non-aqueous preparations, powders such as talc, porcelain goods, sharp metal tools, oils, fats, and other non-aqueous materials are commonly are sterilised by this.
It is performed in three common ways:

A cost-effective, intriguing, and user-friendly sterilization procedure that is mostly used to sterilise liquid materials such as water, drinks, and laboratory fluids.

Filtration is an effective method of sterilising heat-sensitive liquids. When a fluid passes through the filters, any unwanted particles are held inside. The liquid obtained at the bottom is sterilised quickly and easily.
It entails the use of several types of filters (pore size – 0.2 to 0.5 um) with varied pore sizes that are selected based on the substance to be sterilised. 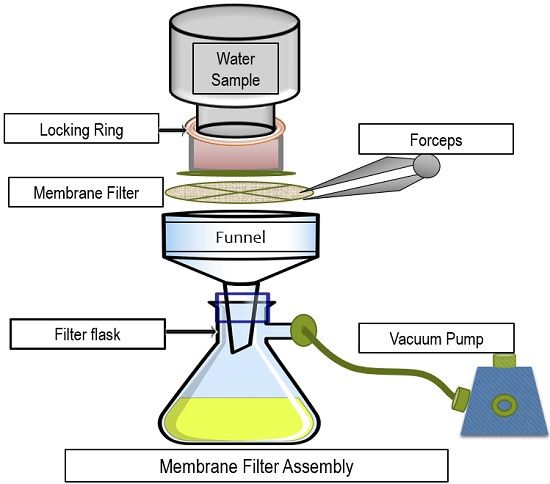 Examples of some filters are:

Radiations are lethal to living entities because they can infiltrate the cell, damaging nuclear material and essential biological macromolecules. The object to be sterilised is exposed to direct radiation during the radiation therapy process. As a result, all microbiological contamination on the surface is destroyed.

Although it is a very successful procedure, it has the potential to generate unwanted mutations, DNA breakage, or depolymerisation in those who use it. Therefore, you need to wear specialised safety gadgets while operating this technique. 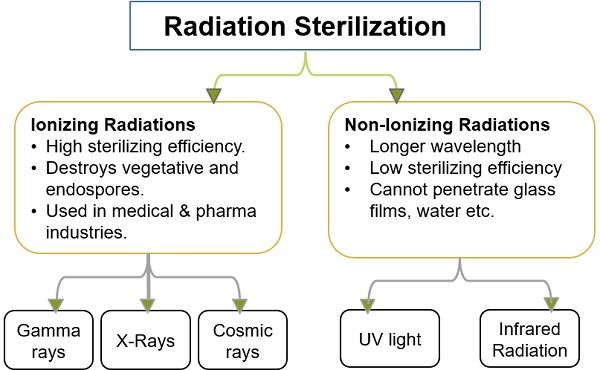 It is preferred for items that are vulnerable to heat and radiation. Chemical sterilization is commonly accomplished by immersing the apparatus, tools, and equipment in a liquid sterilant. This kill both the microorganisms and the spores they produce. As these sterilants can be hazardous to humans, thus this approach must be closely regulated.

The biggest downside of this procedure is that the equipment frequently reacts chemically with the sterilant, causing damage to its composition.

Examples of some chemical sterilant

Ortho-phthalaldehyde (OPA): It has a fast-acting antimicrobial activity. With 12 hours of immersion time, 0.55 per cent of OPA concentration is deemed optimum. It’s a reusable item that doesn’t emit any noxious odours after use.

Glutaraldehyde: To destroy all types of spores and microbiological contaminants, it requires a more extended immersion period (approx. 22 hours). This is because it has a low penetration efficiency. As a result, its application is restricted to low-contamination zones.

This method of sterilization involves the treatment of objects with the chemical sterilant in gaseous form or vapour state. This method is advantageous since it does not involve heat exposure, which eliminates the risk of unintended damage. Due to the lack of moisture, the risk of corrosion or chemical reaction is also reduced.

Plasma gas sterilization: Inside the confined chamber, vaporised H2O2 gas plasma is used to disinfect the apparatus, equipment and tools. All of the microbial life on the surface is destroyed as soon as the gas is released inside. The technique is environmentally benign and safe because it produces water and oxygen as by-products. Although it ensures full sterilization, it is quite costly due to the specialised and delicate machinery used.

Key Differences Between Disinfection and Sterilization

The most important takeaway from the preceding information is that both approaches try to decontaminate the environment from undesired materials such as microorganisms, disease-causing pathogens and their spores. The sterilization proved to be a more potent mode because it can kill even the most difficult-to-kill spores. It is, nevertheless, usually favoured in hospitals and research facilities where contamination cannot be tolerated.

But, sterilization is not only costly and time-consuming, but it also exposes the product to serious harm after repeated usage. Disinfection, on the other hand, is a cost-effective and user-friendly approach for larger surfaces.

As a result, it becomes crucial to assess the scenario and determine which strategy is the best fit for you, as both have their own advantages and disadvantages.