People often get confused between prism and pyramid due to their very similar appearance. But there are plenty of differences that distinguish them into two geometrical categories.

The prism, on one hand, has two bases that are congruent to each other. Its sides are rectangular in shape. As well as these sides are perpendicular to both the bases.

In contrast, the pyramid is a structure with only one polygonal base. Its sides are triangular in shape. These sides meet at the common meeting point, i.e., vertex.

There is no apex or apical point in prisms. Whereas the apical end or the apex are typically found in pyramids.

The prism is generally made up of glass or crystal. Thus, it manifests the phenomena like refraction or rainbow spectrum of light. For this reason, it deals with geometry as well as optics.

In contrast, the pyramids are made of a variety of substances and not just only of glass. Thus, it may or may not exhibit the split of light in a rainbow spectrum.

In the following section, we will briefly learn key differences between prisms and pyramids.

What is a Prism?

You can imagine the prisms just like cylinders with pointed edges and a polygonal shape at the bases. The prisms fall under the subclass prismatoid.

We can define a prism as “A prism is a polyhedron structure having an exact number of faces equivalent to that of sides of its polygonal base.”.

For more easy understanding, you can remember the three basic properties of prism:

Prisms are named according to their respective bases. For example, a prism with a triangular base will be a triangular prism. 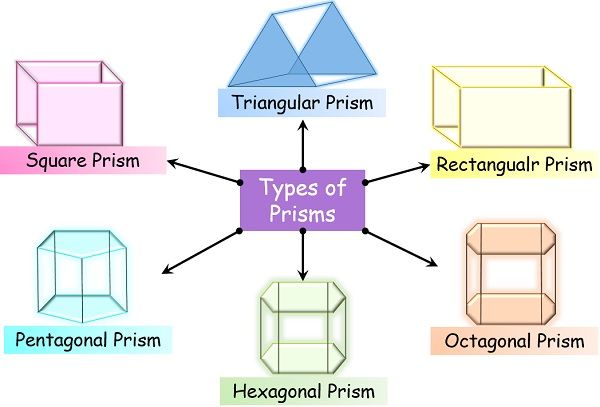 Note: However, the sides are not perpendicular to the base in some prisms. We refer to such prisms as oblique prisms.

In the case of a soda can or pipe-like structures, the bases are curved instead of flat. This makes them different from prisms.

Inflate any 2-D polygonal shape to make it 3-D. For example, to draw a triangular prism, make a triangle base. Duplicate the triangle a few inches away in a parallel manner. Further, join the points of the original triangle to the corresponding points of a duplicated triangle with the help of a ruler. You can highlight the bases by colouring or shading.

You can calculate the volume of the prism by multiplying the area of parallel bases by the height of the prism.

Volume (Prism) = Area of base x Height of prism

As the prisms are generally of glasses or crystals, thus their surface is highly sharp and polished. For this reason, they manifest the phenomenons like refraction and reflection. And the phenomenon of splitting the white light into its constituent seven rainbow colours.

Thus, prism is helpful in studies related to optics and geometry.

What is a Pyramid?

You can understand a pyramid just like a cone with a specified polygonal shape at the bottom. They are basically polyhedra consisting of a polygonal base with a triangle on each side.

You might have heard about the “Pyramid of Giza” in Egypt and Paris’s “Pyramide du Louvre“. People think of pyramids just as these monuments, but instead, the pyramids are all around you. Towers, tents, temples, toys etc., are often pyramid-shaped.

There are two major criteria for any structure to be a pyramid:

There are different types of pyramids on the basis of the respective shapes of their base. For instance, a pyramid with a pentagonal base is a pentagonal pyramid. 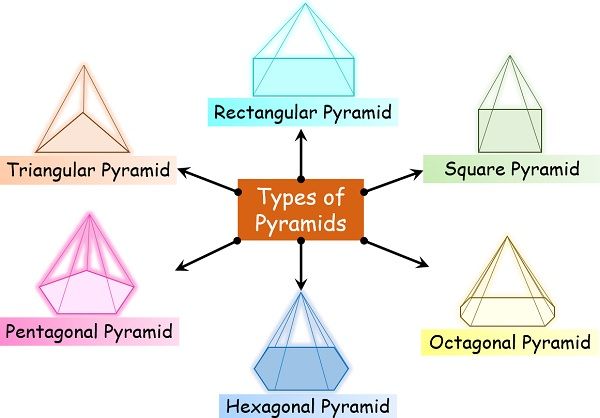 You can simply draw a pyramid by taking any polygonal base and joining the vertices of the base to the apex.

For instance, draw a slanted parallelogram as a base to make a basic right pyramid. Point a small dot parallel to the centre of the base. Now with the help of the ruler join all the vertices of the base to the apex point taken above. You can mark or shade the base to make it more distinct.

Surface Area of the Pyramid

Lateral Surface Area of the Pyramid

Total Surface Area of the Pyramid

This can be calculated taking half the sum of the products of perimeter and height and the area of the pyramid’s base.

Volume of the Pyramid

You can calculate the volume of a pyramid by multiplying 1/3 to the product of the area of the base and the height of the pyramid.

The pyramids are vital structures in the fields like geometry. These pyramids form the shape of some elementary things around. Thus, knowing about them in detail helps to assert our surrounding shapes.

Key Differences Between Prism and Pyramid

Both prism and pyramid are polyhedrons but they greatly vary in their structures. They are present everywhere around. This post will help you understand the basic criteria to distinguish between this nearly same structure which might often confuse you.