The animal has a cord or backbone in their body structure are chordates. Contrary, Non-chordates are the animals without backbone or notochord, this the vital difference between chordates and non-chordates is that the.

These animals belong to the different phyla of the animal kingdom. Also being same at the multicellular level, there is a lot of difference between patterns of organization of cells in this kingdom. Lower animals like coelenterates, sponges differ in cellular level of organization, at the organ level (radial and bilateral) Platyhelminthes and other members differ.

While higher animals like arthropods, annelids, mollusks, comes under Non-chordate and Aves, Reptiles, mammals fall under chordates, they all differ in some of their special physiological function and other unique features like body symmetry, digestive, circulatory or reproductive system, etc.

In this article we will consier some important points which distinguish the chordates to that of non-chordates:

Chordate is derived from the Greek word, where chord means ‘cord or string’, ata means ‘bearing’. Chordate varies in range only till 49,000 of the species. It is commonly predicted that there are 2500 species of amphibian, 6000 reptiles, 9000 birds, and around 4500 mammals. Chordates very in size from medium to large in size, also from gigantic blue whale and the smallest fish.

The chordates are considered among the most ecologically successful and largest animals, existing today. They are able to occupy in any types of habitats and have made themselves adaptable to many kinds of situation, which make them fit to survive.

Chordates are found in fresh water (aquatic), sea (marine), in the air (aerial) or on land (terrestrial), from the poles to the equator. Birds and mammals have a constant body temperature due to which they are able to survive in cold climate, this is the quality, which no other animal has.

Some fundamentals features of chordates are:
Pharyngeal slits – These are the paired lateral gill clefts, which used to be present in all the chordates at some stage of their life. It is an opening, which connects from the inner side of the throat to the outer side of the neck.

Dorsal nerve cord – It is a rod kind of flexible structure connecting the brain with organs and lateral muscles. It lies just above the notochord. It is present dorsally in the body, extending lengthwise in the body.

Post-anal tail – An extension of the body that extends beyond the animal’s anus.

Non-chordates are also the part of kingdom Animalia. All animals share similarities among them, but apart from it, there are many distinct features too. The uncommon appearance of body system like digestive, reproductive, circulatory, the absence of notochord, pharynx not perforated by gill-slits make them differ from the chordates. Even the nerve chord which is present, is double, bearing ganglia and ventrally present, their heart is also dorsal in position. 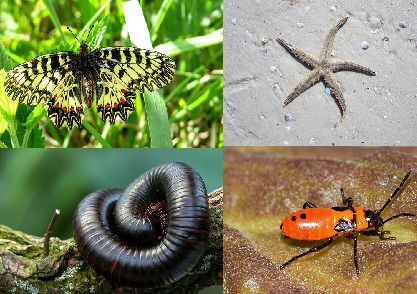 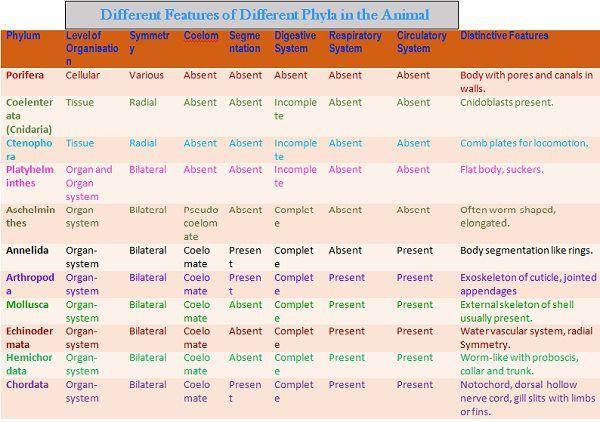 Key Differences Between Chordates and Non-Chordates

Following are the substantial key differences between the two:

Complexities at cellular, physiological and functional level, is the noticeable difference among all kinds of animals. These features empower us to classify them broadly. From the Porifera which is at lowest level among the kingdom Animalia to the highest level of Chordata, development was been noticed at every stage, this may be due to the adaptations or changes in the environmental condition in which they use to live.

So, from the above article, we conclude that there is diversity in every form of life, and they all are characterized by some or the other distinct character whether they are lower animals like Porifera, Coelenterata, Annelida or higher like Mammals, Aves, Reptiles, etc.