Asthma and Bronchitis are both the disorders of respiratory tract but occur due to different reasons with varied symptoms and consequences. Bronchitis leads to the inflammation and swelling of the airway. On the other side, asthma causes the tightening and constriction of the air passage. In both cases, the oxygen intake is reduced.

Bronchitis may last longer for more than two years or maybe curedin a couple of weeks. contrarily, asthma cannot be cured permanently and thus remain for a lifetime.

During bronchitis, the bronchial tubes are filled with thick mucus that clogs the airway making the movement of air slower. In asthma, the respiratory muscles contract leading to the condition of Bronchospasm. This spasm will restrict the easy movement of air.

The following content will provide the basic differences between Bronchitis and Asthma with the help of a comparison chart, a brief description, symptoms, causes, treatment and prevention.

Bronchitis is a disease of the respiratory tract that cause oedema and inflammation in the bronchial tubes. These tubes are the passage for carrying air in and out of the lungs. During bronchitis, this passage is partially blocked due to the development of thickened mucous and excessive cough.

Diagram of the airway in Bronchitis 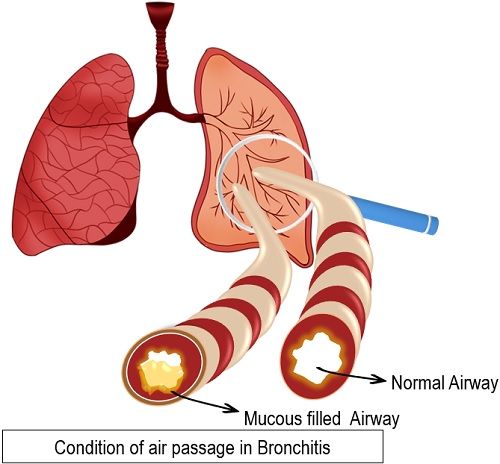 There may be several causes for bronchitis depending on the area you live in, i.e. your surroundings, exposure to microorganisms, toxicity in the air etc. Some of the main risk factors are:

The doctor can diagnose your bronchitis easily through a physical examination of the body.  He may ask you about your symptoms and history of the disease. If necessary, he may suggest you to perform some tests to get a clear picture of the scenario.

There are two main types of bronchitis based on their level of contagiousness.

This is the common type of bronchitis usually caused by viral infection. It is comparatively a short-term infection and is easily curable.

The infection leads to cold, cough with mucous, occasional fever etc., generally occurs in case of allergies, continual contact with dust, smog, smoke etc. It lasts for about 1-2 weeks. But can turn into a severe issue if not taken seriously and can be worsened by smoking.

This is long term bronchitis that causes severe damage to the respiratory organs, mainly to bronchial tubes. It not only damages air passage but also and weakens lung tissues. Tobacco smoking, exposure to chemical fumes or toxic gases for a longer time etc., are the prime reasons behind this.

The recovery from this is prolonged, and the chances of complete eradication are significantly less.

The treatment depends on the level of infection as well as on the type of bronchitis you are suffering from.

Acute bronchitis being less infectious and less contagious that recover on its own within a few weeks. It can be easily cured with basic measures like:

On the other hand, chronic bronchitis needs proper medical support to be completely cured. It being COPD has very low chances of successful eradication.
But the symptoms can be treated using various methods such as adequate medications such as mucolytics, bronchodilators, steroids; pulmonary rehabilitation; surgery; oxygen therapy or by using all of them.

In severe cases, the doctors also suggest you use an airway clearing device to clear the thick mucus and inhalers in case you have breathing issues or wheezing.

Asthma is one of the major non-communicable diseases. It is a long-term respiratory disorder that leads to the narrowing or blockage of the airway, ultimately making the breathing process difficult. It’s a chronic condition of the lungs that doesn’t get cured easily and thus can be life-threatening if not taken seriously.

What happens during Asthma?

In a healthy individual, the muscles of the air passage are relaxed, allowing the air to move easily while breathing. But in an asthmatic person, this airway or the respiratory tract becomes narrower because of the tightening and the inflammation of the surrounding muscles.

The following conditions may arise in the case of Asthma:

What is an Asthma attack?

The asthmatic attack is the stage where the muscle bands surrounding the air path are triggered to constrict and tighten. This situation is termed as “Bronchospasm”.

During the attack, walls of the air passage are swelled and inflamed, leading to thick mucus production. This narrowing of bronchial passage and blocking due to mucus cause shortness of breath referred to as asthmatic attack.

The asthmatic symptoms are as common as any other respiratory disease symptoms. Some significant symptoms include:

Note: Asthma cannot be considered as a typical allergy or an autoimmune disorder. However, it occurs due to the over-reaction and over-activeness of the immune system towards certain elements. These elements are called as triggers.
The triggers can worsen the condition of the asthmatic patient by excessive stimulation of the immune response. Common triggers might include- dust particles, pollens, grass, animal fur, smog, smoke, chemical fumes, strong fragrances like deodorant, perfumes, soaps etc. The change in the weather conditions can also trigger the asthmatic response.

Diagram of the airway in Asthma 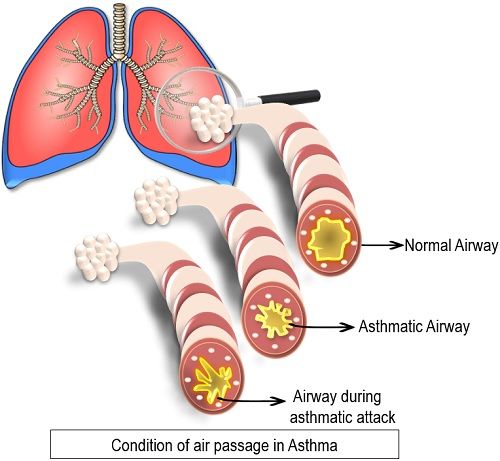 Many of the factors have been described by the healthcare provider as the causative agents of Asthma. Some of the reasons are mentioned as follows:

Based on the level of severity, the healthcare professionals categorize Asthma as:

Asthma is a treatable disease but necessitates attention. If not taken seriously can be really hazardous. Its treatment generally involves:

Key Differences Between Bronchitis and Asthma

Distinguishing between both the disease is important so that person can get the appropriate treatment and thus help in preventing it from further spreading. So following are the key differences between Bronchitis and Asthma are as follows:

From above discussion, we can say that Bronchitis and Asthma share the same symptoms but different causes. Regardless that both the medical case results in inflammatory airway conditions, usually smokers or the person who is in regular contact with the smokers suffer the most.

The only difference in these diseases is their characteristics where Asthma is the worst problem among them as it is incurable and lifelong and still exact cause is unknown. Even bronchitis patients are at risk of getting asthma as their immune systems get low due to which they have many chances, so care should be taken.