Both Bioremediation and Biodegradation are microorganism governed processes. They deal with the hazardous chemicals prevailing in our environment. But both of them differ widely based on their functioning and biotreatment potential.

Biodegradation is a self occurring process. This process biotransforms the toxins into their simpler non-toxic form by using microorganisms. It is a slow process that doesn’t require any human intervention.

Whereas Bioremediation is a human-driven process to remove and reduce environmental toxins. It works by exploiting the ability of microbes to digest and consume the toxin through their metabolic processes. It is a faster method requiring technical experts to carry out the experiment.

In this section, we will discuss key differences between Biodegradation and Bioremediation. 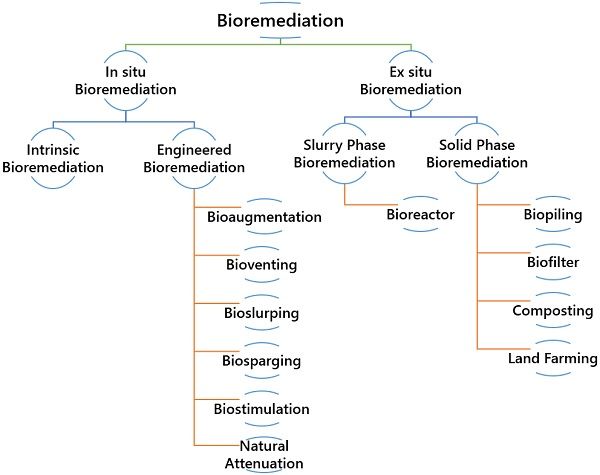 Biodegradation is a simple biological decay process that occurs due to microbial action. This phenomenon recycles the toxic organic debris in non-harmful compounds. The microorganism decomposes the contaminants to replenish the environment with ample nutrients again. So, we can say that it is a natural waste management system.

Microbes are the chief recyclers as they control all the environmental biogeochemical cycles. They break down the pollutants into simple substances through their metabolic processes. The end products are non-toxic compounds like carbon dioxide and water.

Microbial fauna, including bacteria and fungus, play a significant role in Biodegradation.

The following factors impact the process of Biodegradation:

Among the above factors, the chemical nature of the compound determines the biodegradation process.

Desired gene coding for a particular degradative enzyme may be present in chromosomal DNA or in the plasmid. In some cases, both chromosomal and plasmid DNA participate in the biodegradation mechanism.

1. Biodeterioration
The surface level deterioration transforms the physical and mechanical properties of the contaminant. Here, the material comes in contact with the environmental factors. This causes the weakening of the material. This process eases the other process for microbial consumption.

This lytic process cleaves the polymer by breaking down the chemical bond. Long and branched polymers break down to produce several oligomers and monomers.

This is not a mandatory process that always occurs. Under certain circumstances, the organic by-products get converted into inorganic matter. This process is mineralization. 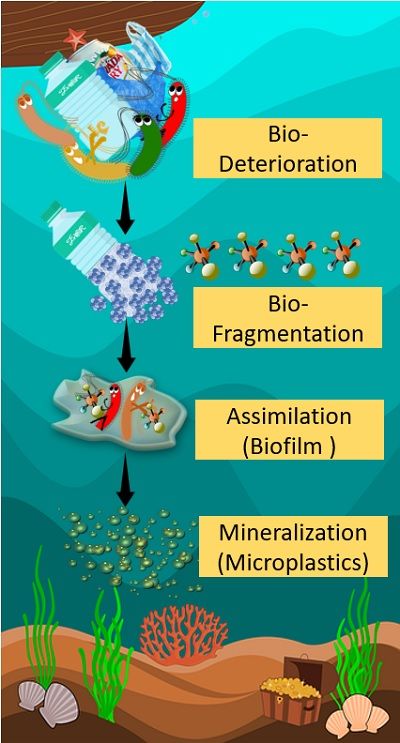 Bioremediation is a division of biotechnology. It refers to the human-induced microbial degradation of the toxic compound. It employs the use of microbial fauna to clean the polluted zones.

We know that the microbes are the invisible workforce that is fighting pollution. But this war between pollution and microbe is very slowly executing. Due to this, Bioremediation becomes a problem-solving approach here.

Bioremediation enhances the average growth of microbial fauna. capable of biotransformation at the pollution site. This deliberate growth transforms the toxins into harmless products. It requires proper human assistance and requires accurate monitoring. 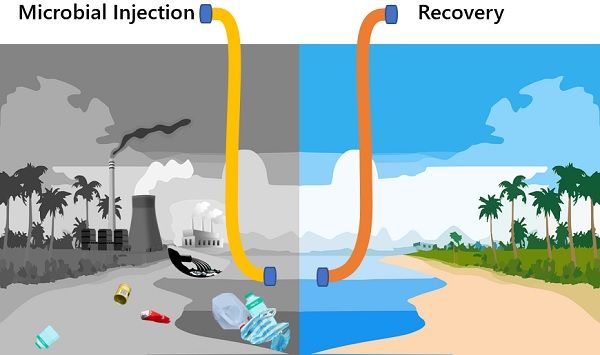 Two methods attain the environmental clean by the Biodegradation:

It is a direct approach for the removal of the toxins like xenobiotics directly from the site of pollution. For this process, the extra nutrients are supplied at the site. This increases the growth of microbial fauna.
At the time of growth, the microbes consume pollutants as their food. They have a certain metabolic potential to digest them. And also convert harmful compounds into simple non-harmful molecules.

We can further divide it into two types:

Advantages of in situ bioremediation

Disadvantages of in situ bioremediation

Here, we collect the pollutants from the pollution site into specially designed place. After that, we treat them with specified microbes. It is an advanced process that has provided successful results. This process overcomes the problems related to in situ remediations. 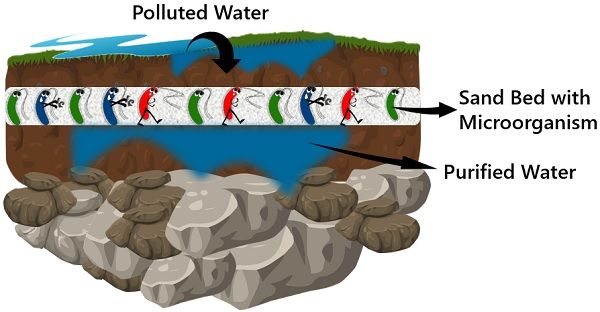 Types of Reaction in Bioremediation

2. Anaerobic: This process works in the absence of oxygen. Here, the anaerobic microbes perform in the remedial process. It is a cost-effective technique but is a slow process.

Some examples of anaerobic bioremediation reactions are:

3. Sequential Bioremediation: It includes both the aerobic and anaerobic reactions to curb the remediation process effectively. This is also employed to decrease the toxicity level of certain compounds.

For example, tetrachloroethane and tetrachloromethane need sequential Biodegradation for their decomposition.

With advancements in science and technology, humans are continuously developing their living standards. As a by-product, we produce much more toxic waste than that can be naturally treated by nature. After the industrial revolution has witnessed the emergence of a new and more hazardous chemical toxicant.

In this scenario, the conventional biodegradative pathways need backup strategies like Bioremediation. The process of Bioremediation comes under synthetic biology. It produces potent molecular tools with microbial fauna. These engineered tools and systems are the biological adaptation. They can tackle these pollutants and maintain environmental homeostasis naturally.

Key Differences Between Biodegradation and Bioremediation

Both the processes have their importance in the environment. Problems regarding pollution are constantly increasing. Therefore, the natural and slow bioremediation process might not be sufficient. Thus, both Biodegradation and Bioremediation are applied as per the site’s pollution level.