Bacteria and Fungi come under different categories; the former one is the prokaryotic cell while the latter one is Eukaryotic cells. Apart from this, there are many differences between them like bacteria need a host to live, and they can be autotrophs as well as heterotrophs, whereas fungi grow their own and are heterotrophs which depend on others for their food. Bacteria do not have nuclear membrane enclosing nucleus, while Fungi (eukaryotes) have well- defined nucleus surrounded by the nuclear membrane.

Bacteria and Fungi shares some similarities also like, like they both reproduce and are living, they both can be parasitic and are microscopic too. Below we will discuss the general differences between both the microorganisms, with their different features.

Bacteria are prokaryotic microorganisms, considered as first organisms on earth evolved around 3.5 billion years ago. They can be either autotroph (which can prepare their food by the photosynthesis process or chemosynthesis) or heterotrophs (which depends on their host for nutrition). Bacteria exist in three shapes which are spherical (e.g., cocci), rod-shaped (e.g., Vibrio), and spiral (e.g., Spirochetes) and reproduce asexually by binary fission method or by conjugation.

They are useful in releasing nitrogen to the plants, in decomposing organic matters, used in the fermentation process for making cheese, curd, and yogurt, though sometimes causes illness (tuberculosis, salmonella, strep throat), spoiling of food and contamination of water.

Fungi are the eukaryotic organisms, which can be unicellular (yeasts) or multicellular (hyphae), evolved 900 million years ago and derived from protists. They exist in the thread-like structure called hypha when these hyphal structure grows and form a thick mass; it is called mycelium. 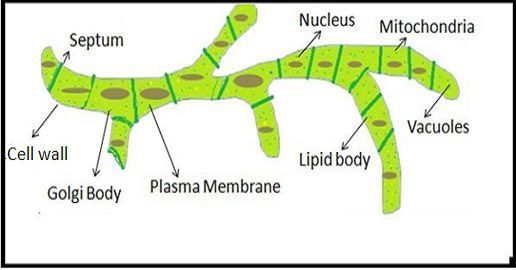 Fungi are heterotrophic organisms, and consume organic carbon for their nutrient. They secretes hydrolytic enzymes, by spreading in soil and rotten wood, feeding off the organic remains. As they obtain their nutrition from dead and decaying materials, they are considered as saprophytes. Fungi reproduce sexually as well asexually, by developing branches, fragmentation, budding or by spores formation.

Some fungi are used for making antibiotics (penicillin), some are used as edibles and used for making bread, but they are also responsible for some plant and animal diseases may spoil food also. 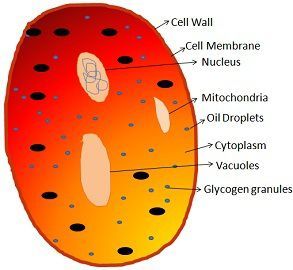 Following are the components of fungi:

Key Differences between Bacteria and Fungi

Following are the substantial differences between bacteria and fungi, which can avail in knowing them better:

From the above discussion, we can say that the microorganisms which are found everywhere, can sometimes be harmless or harmful. They both have different cellular makeup and differ in their functions too. In ecology also they play the important role where some bacteria help in the fermentation process, fungi help in making antibiotics while some may be harmful by causing disease like tuberculosis, strep throat, skin infection, athlete’s foot.