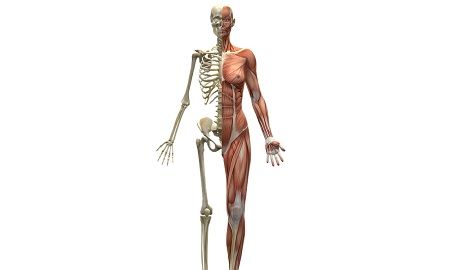 Actin is the collective molecules of protein from which thin bands are formed. On the other hand, Myosin is the group of protein by which thick bands are formed. Actin and Myosin are responsible for various types of cellular movements, and the most striking one is the muscle contraction, that provides the best-model to understand the role of actin and myosin.

Now, to know the function of actin-myosin, it is necessary to gather bit information about muscles contraction. The cellular and molecular movements in the body are dependent on the muscles cells. Vertebrates have three types of muscles cells – smooth muscles, cardiac muscles and skeletal muscles.

Skeletal muscles contain numbers of the muscles fibres, these are a group of numerous cells, that fused to give rise to the single large cells at the time of development. The muscles cells contain numerous nuclei, and its cytoplasm contains myofibrils, that consist of the cylindrical bundles of thick and thin filaments.

Therefore, it is said that myosin and actin together work at the time of the muscles contractions, where myosin is the precursor protein that plays its critical role in converting the chemical energy (ATP) into mechanical energy. In this article, we will provide vital differences and the points on which actin and myosin vary with their similarities.

As discussed above, the two primary protein filaments found in muscles are actin and myosin. It is one of the essential components of the cellular cytoskeleton, especially in eukaryotes. It is a highly conserved protein having the molecular weight of 42kDa.

As actin filaments play a primary role in the formation of the dynamic cytoskeleton of the cell, hence it provides the movement and shape also to the cell. The cytoskeleton also delivers communications with the neighbouring cells, also supports the interior surrounding within the cell.

Myosin is another type of protein filaments that works in the presence of calcium ions. Myosin is known to generate the force that is required during muscle contraction. So, it is also known as motor protein.

Myosin has three parts: head, neck and tail, and is composed of numerous light chains and two heavy chains. The globular head region has the binding site for the ATP and actin, and the neck part has alpha-helical region wheres tail has other binding sites. Head region converts ATP to ADP, by the enzyme ATPase.

As soon as the nerve sends signal muscle cell for the muscle contraction, the myosin and actin get activated. After that, the myosin starts working in releasing energy (ATP) and further the myosin along with actin filaments slide past each other.

Tropomyosin and troponin are other two muscles protein that temporary fuse with the actin and myosin for the muscle contraction. This working can be understood by the ‘sliding filament theory’.

Actin and myosin also play a critical role in nonmuscle cells. There are two actions performed consecutively by the muscles, which are contraction and relaxation. The contraction results in shortening of muscles and results in movement, while relaxation returns the muscle to its original length.

Key Differences Between Actin and Myosin

Following are the few though essential differences between actin and myosin:

So we can say that apart from the muscle contraction, actin and myosin play a vital role in cell biology by participating in cell division, in functions of nonmuscle cells, etc. Myosin is thicker than actin and has darker striations. The working of muscle contraction can be understood by sliding filament theory.