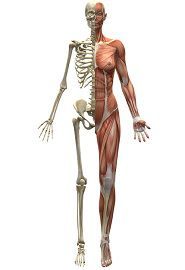 Locomotion and movement are the main features of the organisms, whether it is unicellular or multicellular. For this action, there is the particular type of tissues known as muscular tissue, and the cells are referred to as the muscle cell. These muscular tissues are formed from the embryonic mesoderm. These tissues are coordinately working with one another and thus support the movements of the body, and its various parts.

In the provided article we will be studying the basic difference between the two types of muscles and a brief description of them.

Voluntary muscles occupy around 40% of the body weight. They are the under the control of the peripheral and central nervous system. The striated or skeletal or striped are the other names of the voluntary muscles. In the body of an individual, these are found in the bundles of muscle fibers. These are long and are present near the bones.

The bundles of muscle fibers present are bounded by the sarcolemma, which contains sarcoplasm, sarcoplasmic reticulum, and are uninucleated. The entire muscles are covered by the epimysium, which is the kind of connective tissue. Each end of the muscles is attached to the bones, through the tendons. There are dark, and light bands present between each running fiber called as myofibrils.

Structure of the Voluntary muscles

(i) As it is said, muscles fibers are the thread like, unbranched, and cylindrical, their range varies from 1mm to 30 cm.

(iii) Sarcoplasm – It resembles the cytoplasm of the cell, and as it is present in the muscle fiber, it is called as sarcoplasm.

(iv) Syncytial – Below the layer or sarcolemma, nuclei are present, these are oval and flat in shape.

(v) Sarcosomes – Apart from nuclei, cytoplasm, there are many types of enzymes, fat drops, and also mitochondria or sacrosomes, also endoplasmic reticulum or sarcoplasmic reticulum, golgi bodies, and other organelles.

Also known as unstriated or unstriped muscles. They are also known as visceral muscles as they are present in the walls of internal organs like urinary bladder, uterus, alimentary canal, etc. They are not under the control of one’s desire called as involuntary muscles.

The cells of muscles fibers are long, thin and spindle-shaped, though structurally very simple. There is oval nucleus present in the center of each cell. The nucleus is surrounded by the sarcoplasm. There are long, thin, parallel filaments present in the sarcoplasm is called as myofibrils. These muscles do not show dark and light bands, although actin and myosin are present.

Given below are the substantial difference between the Voluntary and involuntary muscles:

We discussed the voluntary and involuntary muscles, and their importance also. We also found that both the muscular system is not only required for the movements or locomotion, they also protect the body from external shock. Thus these are important for the body.