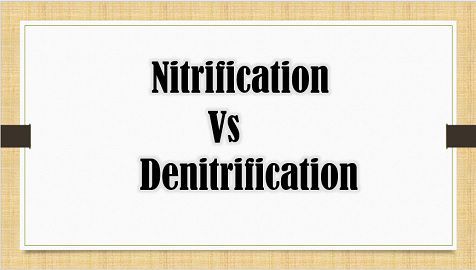 Both the steps are a significant part of the nitrogen cycle, which is one of the most important cycles for our atmosphere. Around 78% of the atmosphere contains nitrogen, which is even an essential biological molecule found in proteins and nucleic acid and thus marking it important part of all living being.

The nitrogen cycle is completed in five simple steps: nitrogen fixation, nitrification, assimilation, ammonification, and denitrification. In this article, we will be discussing the two steps only and how they differ from each other.

Nitrification is an oxidation process (loss of electrons or gain of the oxidation state by an atom or compound takes place). This process starts with the ammonium which gets oxidized into nitrite (NO2-), this action is performed by the bacteria Nitrosomonas sp. Later on, this nitrite (NO2-) gets oxidized into nitrate (NO3-), and this action is performed by the Nitrobacter sp. 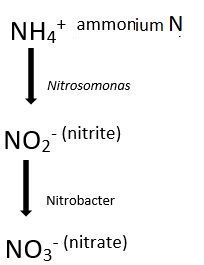 The bacteria are autotrophic, and the reaction is performed under aerobic condition. The importance of this step in the nitrogen cycle is the conversion of ammonia into nitrate, as nitrate is the primary nitrogen source present in the soil, for the plant. Though nitrate is toxic to the plants.

The activity of nitrifying bacteria gets slower in acidic solution, and are best at pH between 6.5 to 8.5 and temperature vary from 16 to 35°C.

Denitrification is the reduction process, where the nitrate is removed in the form of nitrogen and is converted to nitrogen gas. The action is performed by bacteria like Bacillus, Aerobacter, Lactobacillus, Spirillum, Pseudomonas.

The bacteria are heterotrophs, and the action is completed under anaerobic condition. Even the small amount of oxygen may hamper the process, but there is a need of organic carbon. Denitrification is useful for wastewater treatment, aquatic habitats.

The denitrification is performed best at pH between 7.0 to 8.5 and at the temperature between 26 to 38°C.

Given below are the important points which differentiate both the process:

We all know that nitrogen is the substantial part of the atmosphere, as well as plants and animals also. As nitrogen cannot be used directly and so is transferred in through various sources. In the provided content we focused on the distinction between the nitrification and denitrification and found variations in their products and needings.