Pathogenic microbes like bacteria, viruses, etc., are the prominent reasons behind communicable diseases. Whereas non-communicable ones occur due to metabolic dysfunction or inheritance.

In this context, we shall discuss the differences between communicable and non-communicable diseases. And the global issues that they cause, as well as how to control and avoid them.

What are Communicable diseases?

“Diseases that can easily be communicated from one organism to another, either directly or indirectly, are known as communicable diseases”.

Communicable diseases are also known as contagious or transmissible diseases. They get transmitted from one host to another either by direct or indirect means.

These diseases readily spread among a large group of individuals in a very short span of time. For which they are referred to as mass killers.

Communicable diseases are not completely seasonal. But still, environmental variations affect most of them.

For example, malaria spreads rapidly due to the humid rainy climate. This is due to the fact that a humid climate is ideal for mosquito reproduction.

Communicable diseases impact a large proportion of the population overall the globe. Several factors contribute to this widespread proliferation such as:

Thus, such transmissible ailments become a threat to the health of the entire human race.

Millions of people get infected, and thousand die due to these contagious diseases. South Asia, Central Africa, North America and Europe are highly prone to such diseases. These diseases impose a burden on the health of individuals. Also, they hamper the economy and social well-being of any country.

The transmission of these diseases can take place in two ways:

Direct transmission spreads from one organism to another through direct close contact.

Note: Touching common surfaces like elevators, doorknobs, switchboards, etc. spread these contagious diseases. For instance, the infection bearer sneezed on a surface. This will leave the pathogen containing droplets there.
If a healthy man touches that surface, he might intake those pathogens by touching his mouth or nose.

Indirect transmission requires the passage of pathogen through the biotic or abiotic components.

When a pathogen enters a healthy individual, it takes time to multiply and adapt to the internal environment. This period of time is called as the Incubation period.

There are no specific signs or symptoms of the disease during this time. As soon as this time period expires, the diseases’ symptoms begin to manifest.

There are four primary stages of any communicable disease:

These infectious diseases pose a significant hazard to public health worldwide. The poor countries or even the developing ones suffer a lot due to:

These issues make it mandatory to prevent these transmissible health hazards from happening.

Certain preventive measures to control these diseases are:

What are Non-Communicable Diseases (NCDs)?

Non-communicable diseases or NCDs are also referred to as chronic diseases. They are non-transmissible, i.e. they are not conveyed from the carrier to the others by any means of exposure.

These diseases might not travel from one to another, but that doesn’t mean they are not hazardous. Contrary to communicable diseases, they last for a longer period of time. 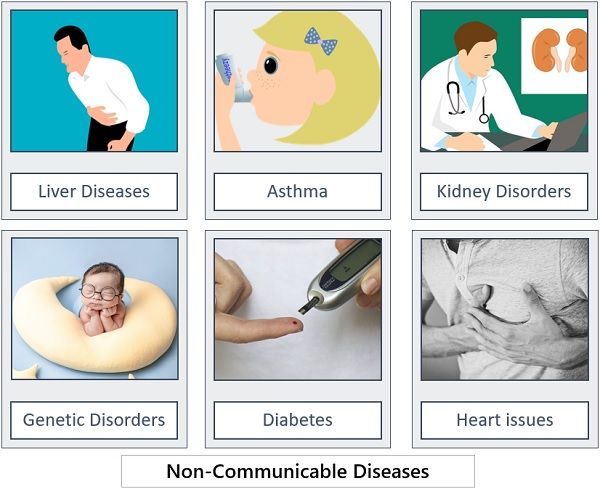 Control and prevention of Non-communicable diseases

To reduce the influence of NCDs on the global society, there is a need for a comprehensive approach. This approach should be applicable to a broad range of populations. One of the effective ways to control NCDs is to lessen the risk factors related to them.

Cheaper and efficient management of these diseases is a must for their eradication. Early detection, screening and treatment of NCDs can prevent their explosion up to a great extent.

Depending on the disease, we can treat NCDs by conservative method or with surgery.

Both of them impose an equal burden on the health of individuals worldwide. Also, these diseases can impact the social well being and the economic state of the country. Thus, it becomes important to prevent them irrespective of their nature.