Both centipede and millipede belong to the phyla Arthropoda and sub-phyla myriapods. The myriapod is a Greek terminology that means ‘Numerous feet’. And since the centipede is a hundred-legged worm while the millipede is a thousand-legged worm, therefore they fall under this category.

What is a Centipede?

The term centipede has its origin from two Latin words, ‘Centi-hundred’ and ‘pedis- foot’. Thus, often refer centipede as the ‘Hundred-legged worm’. It has its scientific name as scolopendra. And it is a member of class Chilopoda (Comes from the Greek word ‘Chelios meaning lip).

Their legs are always present as an odd number of pairs. This implies that no species of centipede possesses exact hundred legs in reality. 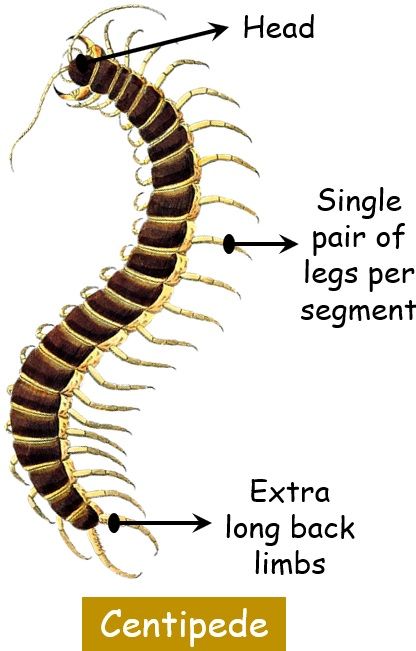 The centipedes are flat-bodied worms with hundreds of legs. The approximate length is around 4-12 inches. They are generally dark brown or yellowing grey in colour.

No any landform on the earth is devoid of centipedes. This is because of their ability to survive in a vast range of climatic conditions. This includes arid deserts, wet rainforests, even wooden logs, litter around your house etc.

The centipedes are predatory carnivores with venomous bites. They survive over smaller insects. This venom helps them in catching small insects like ants cockroaches.

The first pair of limbs, called maxillipeds, are elongated forward from the body to cover the mouth. These limbs are venomous and are a sharp claw-like structure. The maxillipeds help to paralyze the prey and make the killing faster.

The centipedes are ‘Opisthogoneate‘ as their genital opening is at the caudal end of the body. They have a single genital opening, but they do not copulate.

Instead of mating, the male centipede releases and collects the spermatophores (sperms) in bundles. And the female centipede has to absorb these sperm on finding them. The males do a courtship dance to lure the female for absorbing the sperm.

After the fertilization, the female lays around 10-50 eggs at a single time. The egg discharge process occurs mainly in temperate places in springs or summers.

The time required from conception to hatching varies with species ranging from one to several months. Mother centipede lives with the eggs to secure them from danger and fungus. Later as the eggs hatch, it leaves.

In some species, the mother stays even after the hatching of young centipede for protecting them.

Centipedes use their fast-moving skills to evade their predators. They bear poison glands that discharge venom in danger.

They tend to bite that cause allergic responses like itching, swelling, redness etc.

What is a Millipede?

The millipedes also fall under the phylum Arthropoda and class Diplopoda. Its scientific name is Julus. The term millipede comes from the Latin language that stands for ‘thousand feet’. Whereas, Diplopoda comes from two Greek words ‘Diplo-two’ and ‘pedis-foot’.

These are prevalent abundantly with around 80,000 different varieties. In reality, there are no species with exact thousand legs, as the name suggests. But yes, there are several hundreds of legs found over their body. The highest number of legs recorded is 750.

Millipedes are often jumbled with centipedes. But they both are widely distinct from one another. 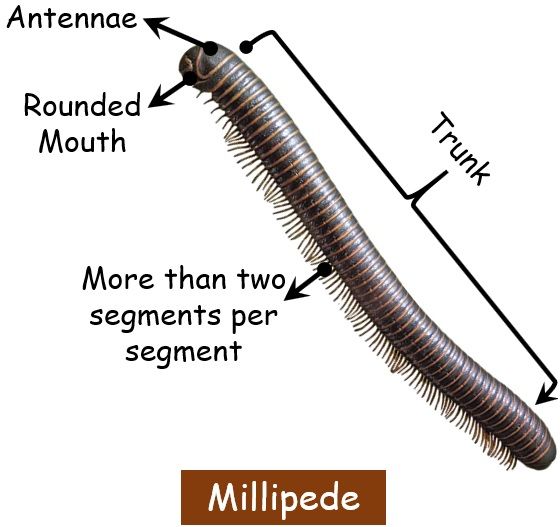 Being terrestrial arthropods, the millipedes prefer the wet and humid areas as a habitat. They are predominantly found in the soil of gardens and flower beds, decomposing plant waste, wet wooden logs etc.

The millipedes are scavengers. They feed over the dead and deteriorating matter. Thus, also referred to as detrivores. For this reason, they serve the role of ecological agents for the decomposition and nutrient cycle of soil. Millipede readily consumes the roots and leaves of small saplings.

Millipedes are generally sub-cylindrical in shape with rigid and non-flexible bodies.

Their length ranges from 1-8 inches. And their colour is brighter black or brown.

Millipedes only bear a single genital opening. These are ‘Progoneate’ with the reproductive opening at the anterior end of the body. More specifically, around the 3rd segment. They copulate via gonopods that are copulatory organs located at caudal segments.

Here, both the male and female mate together. The gonopods pass the male gametes inside the female body. The female lays about 10-300 eggs at a time.

Although the millipedes are not poisonous, they bear some toxic chemicals or corrosive fluids. The millipede secretes these fluids as their defence mechanism.

The toxins can cause harm to humans if touched. It can cause itching, burning and some allergic responses. In case of a threat, they curl their body into a spiral. And discharge a foul smell that drives the predators off.

Key Differences Between Centipede and Millipede

We often encounter several creepy crawlies in our daily lives and are confused by their similarities. The same problem is with centipede and millipede. They both are significantly distinct but are often jumbled together.

This section provides some of the most basic and fundamental traits that distinguish them. Along with that, we also provided a brief description of their shapes, structure, habitat, structural characteristics etc.