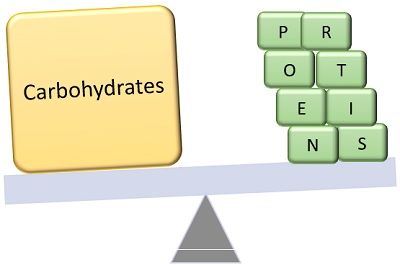 The carbohydrates act as fuel or a source of energy for the cells. The subsequent phases of carbohydrate metabolism generate energy molecules. Our bodies use this energy to conduct all mechanical, physical, and metabolic tasks.
Whereas proteins facilitate a range of metabolic functions. For example:

Carbohydrates are sugars (Saccharides) by nature. Their monomeric unit is a monosaccharide connected by a glycosidic bond. In contrast, proteins constitute amino acid residues linked together by peptide bonds.

The primary elements found in carbohydrates are hydrogen, oxygen, and carbon. However, proteins also contain sulphur, nitrogen, and phosphorus in addition to these three.

In the following context, we will discuss the differences between carbohydrates and protein. Along with a comparison chart, types, daily requirements and roles in our bodies.

All our body parts, even each cell has to perform several tasks for the optimal functioning of our body. For this, energy is the most important thing provided by the food we intake. The significant component in our food that supplies energy are carbohydrates. Therefore, their requirement is in a larger proportion. 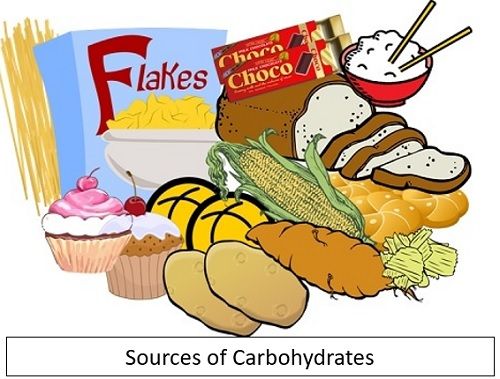 “Carbohydrates are carbon, hydrogen, and oxygen-based molecules. They help our body to meet its energy needs”.

How many carbohydrates must you eat every day?

Carbohydrate consumption has no set limit that applies to everyone. Their intake value varies depending on the individual’s age, sex, health, and purpose.

On average, each one of us should consume 225-325 grams of carbs on a daily basis. This accounts for roughly 45-65 % of our daily calorie intake. This value may be higher or lower depending on one’s health and calorie requirements.

How does your body process carbohydrates?

The digestive system breaks down the complex carbs into simpler sugars i.e., glucose. Later, these glucose molecules enter the bloodstream.
Further, processes like Glycolysis and Krebs cycle catabolize these molecules to produce energy. This energy produced serves as fuel for our bodies.

What will happen due to excess carbs?

The amount of carbohydrates you consume determines the level of sugar in your blood. As a result, eating too many carbohydrates might raise blood sugar levels. This situation leads to hyperglycemia, i.e. diabetes. 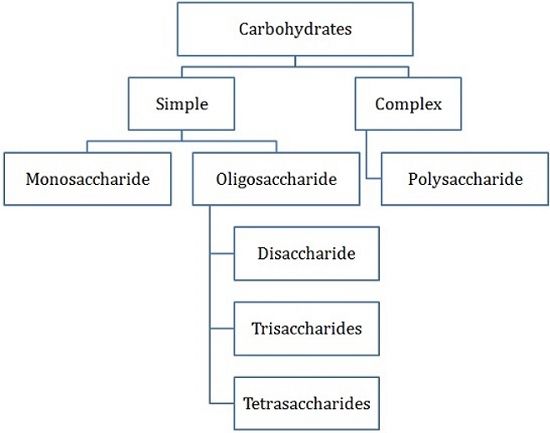 Carbohydrates are scientifically classified on their products of hydrolysis as:

1.   Monosaccharides: These are polyhydroxy aldehydes or polyhydroxy ketones. They are basic and simplest carbs. They cannot be further hydrolyzed into form simpler forms.

2.  Oligosaccharides: Their formation occurs by linking a definite number of monosaccharide units. During this process, the water molecules get eliminated.
Based on the number of monomeric units connected together, they can be subdivided into:

Note: Due to the indefinite number of monomers, we can assume their number as ‘n’.
Example: Starch, cellulose, glycogen etc.

People often develop a myth that carbohydrate intake is responsible for their fattening. As a result, they avoid carbs at all costs. However, this misconception is not entirely correct. Anything consumed in excess has negative consequences.

Suppose your diet deprives carbs, then your body will take extreme efforts to meet its energy need. For this, the body will feed on stored carbohydrates in muscles. It will chemically break down the proteins till they resemble and behave like carbs.

In such a case, the body struggles to remove the unneeded proteins as a by-product. For this reason, the body suffers acute weakness, muscle loss, and strain on the kidneys.

Proteins form a significant part of our diet as well as of protoplasm. As a result, their name is derived from the Greek word protos, which signifies primary. The living body can survive in the absence of carbs and fats but won’t be alive with a protein-deficient diet.

The proteins are intricate, nitrogenous organic compounds. They are present in all plants and animals as they create their body’s framework. Animals have a higher amount of proteins (about 19%) as they are the structural unit of animal tissues.

The living body comprises a variety of proteins. Each looks different and plays a unique role.

For example, skin, muscles, horns, hair, feathers, nails, hoofs and much more. These proteins are constantly repaired and renewed throughout your life. 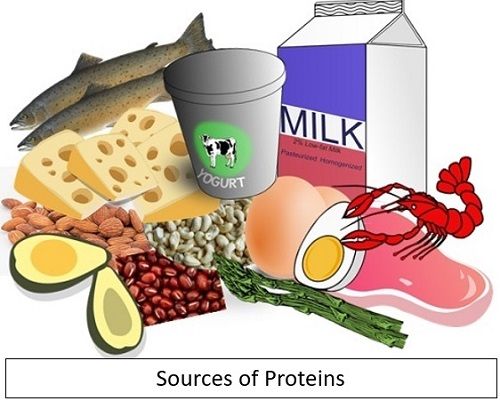 “Polyamides of α-amino acids are known as Proteins.”

The composition of proteins is not definite and varies with its respective source. But the average composition is:

The process of hydrolysis involves the following steps: 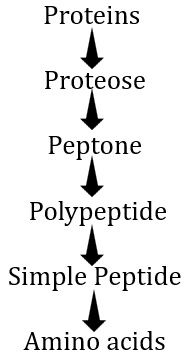 How much protein should you eat daily?

On average, a normal adult needs 60-80 grams of protein daily. This seems very much but the truth is consuming only three ounces of meat will provide 21 grams of proteins. We can find proteins in large proportion in eggs, milk, seafood, curd, and other foods. As a result, meeting the daily protein requirement is not difficult. 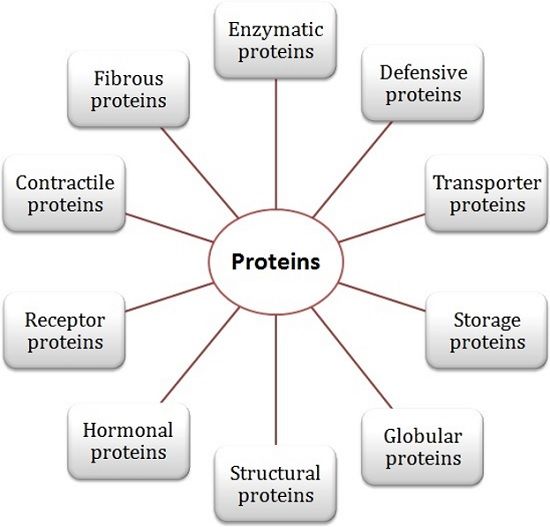 Based on solubility, proteins are of three types:

a. Simple proteins: They give only α-amino acids on hydrolysis; thus, they are known as simple proteins.
Example: Albumins, Globulin, Prolamines, Protamines, Histones etc.

b. Conjugated Proteins: On hydrolysis, they derive α-amino acids along with compounds. These compounds are either carbohydrates, phosphoric acids, or nucleic acids. The above non-protein groups are referred to as prosthetic groups.
Example: Glycoproteins, Chromoproteins, Phosoproteins, Nucleoproteins etc.

c. Derived Proteins: They are the degraded products generated during the hydrolysis of proteins.

On the basis of composition, they are of two types:

a. Globular Proteins: They are compact, folded, almost spheroidal proteins. They have weak internal hydrogen bonding, due to which they make a compact structure.
For example:

b. Fibrous Proteins: These are long thread-like molecules that lie side by side, making fibres. These are also held together by hydrogen bonding and have strong intermolecular forces.
For example:

On the basis of function, they are of the following types:

Deficiency of protein may lead to severe health issues such as:

Key Differences between Carbohydrates and Proteins

It is necessary to consume the right proportion of nutrients to live a healthy life. The only way for these nutrients to enter your body is through your food. Thus, it becomes more than essential to understand what we eat?

Proteins and carbohydrates are both essential for optimal health. Each of these nutrients has a distinct role in the optimal growth of a healthy body. Any diet that deprives you of one or the other for a lengthy period can lead to severe biological malfunctions.