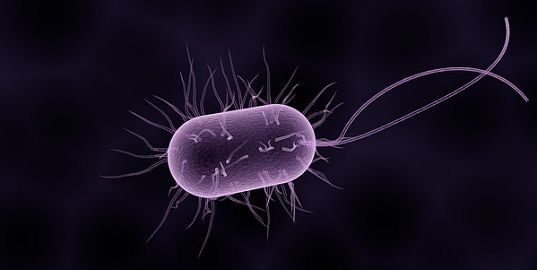 Cilia are short, hair-like structure, present in large numbers in a cell, while flagella are long, hair-like complex structure and are few per cell. Cilia and flagella are hair-like appendages, extending through the surface of the living cell, they differ in their mode of beating, size, and number.

Cilia and flagella are the locomotory structure, which is the extension of the plasma membrane of the cell. Besides the locomotion, they also help in other processes like respiration, excretion, circulation, etc. They also take part in capturing food. These both are found in eukaryotic cells, but in prokaryotic cells only flagella

Cilia are short, slender, hair-like appendages extending from the surface of the cell. These are present in almost all eukaryotic cells. They play a significant role the cell and overall body development.

Cilia are most active during the cell cycle progression and proliferation. The width of the cilium is less than 1 µm, and the length varies from 1-10 µm.

Cilia are broadly divided into two types – Motile and Non-motile. Motile or moving cilia are mainly present in lungs, middle ear, and respiratory tract. These kind beat rhythmically. Their work is to keep the airways clear of mucus and dust, due to which it is easy to breathe freely and without any irritation. They are also helpful in the movement of the sperm. 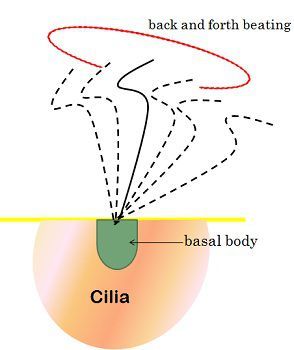 The arms ‘dynein‘ which are attached to the microtubules, act as the molecular motors. The defect in the dynein arms causes male infertility, problems in the respiratory tract.

Non-motile cilia also called as primary cilia play their role in receiving signals from other cells or nearby fluids, by acting as the antenna for the cell. For example in the kidney, the cilia send signals to the cells about the flow of urine.

Even in the eye, the non-motile cilia supports the transportation of vital molecules from one end of the photoreceptor of the retina to the other. Non-motile cilia have 9+0 microtubular arrangement.

Flagella are the complex, hair-like filamentous structure, extending through the cell surface. Flagella are composed protein like flagellin, embedded in the cell envelope. They are responsible for motility. They can be about 5-16 µm in length and 12-30 nm in diameter.

Archaeal flagella show similarity with that of bacterial flagella but lack a central channel. Eukaryotic flagella are the complex projections, that beat back and forth. An example is the sperm cell, which propels itself through the female reproductive tract by using its flagellum. 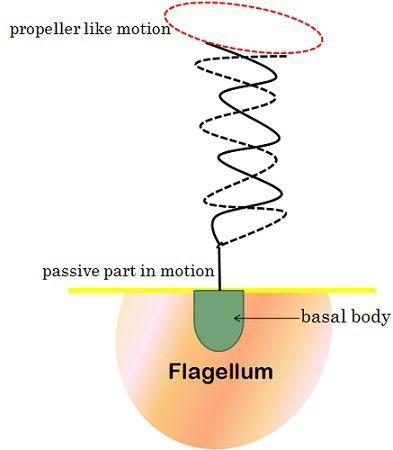 Usually, flagella consist of Hook, Filament and Basal body in their body parts. The filament is the external part of the cell; the hook is in the cell envelope, and basal body is attached to the cytoplasmic membrane, through the ring-like structures. Their function is adhesion, signal transduction, sensation, movements.

Key Differences Between Cilia and Flagella

Given below are the key differences between the cilia and flagella:

Cilia and flagella are the locomotory structure of the prokaryotic and eukaryotic cells, but apart from it, they also perform certainly a physiological process like circulation, respiration, locomotion, excretion. Being structurally same, the feature that distinguishes them from each other is their number, size and beating mode.